The Israeli military said in a statement shortly after midnight local time (7.22 AEST) that air and ground forces were attacking the Hamas-run enclave, as hostilities entered their fifth day, with no sign of abating.

“IDF air and ground troops are currently attacking in the Gaza Strip,” the Israeli Defence Forces tweeted at 7.22 AEST. 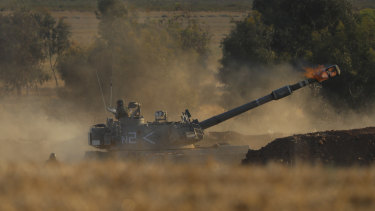 An Israeli artillery unit fires toward targets in Gaza Strip.Credit:AP

Although the statement gave no further details, Israeli military affairs correspondents who are briefed regularly by the armed forces said it was not a ground invasion, and that troops were firing artillery from Israel’s side of the border.

Residents of northern Gaza, near the Israeli frontier, said they had seen no sign of ground troops inside the enclave but reported heavy artillery fire and dozens of air strikes.

The New York Times reported that it was not immediately clear if the Israeli incursion was a limited bid to destroy rocket bases or kill leaders of Hamas, the militant group that controls Gaza, or if it was a full-fledged invasion akin to the one in 2014 that killed more than 2000 Palestinians.

Hours before the announcement, Israel had called up 7000 military reservists, and canceled all leave for combat troop units.