Israeli hit squad from specialist Mossad unit killed al Qaeda No. 2 Abu Muhammad al-Masri and his daughter Maryam, 27, because she was being groomed to help run the terrorist organization and was planning attacks

Al Qaeda’s second in command Abu Muhammad al-Masri (pictured) was secretly shot dead in Tehran on August 7, four current and former US officials confirmed to AP. The officials said that the US worked with Israel to track and kill al-Masri and his 27-year-old daughter Maryam

The United States and Israel worked together to track and kill a senior al Qaeda operative in Iran earlier this year, a bold intelligence operation by the two allied nations that came as the Trump administration was ramping up pressure on Tehran.

Four current and former US officials said Abu Mohammed al-Masri, al Qaeda’s No. 2, was secretly killed by assassins in the Iranian capital in August, as was his daughter, Maryam.

The US provided intelligence to the Israelis on where they could find al-Masri and the alias he was using at the time, while Israeli agents carried out the killing, according to two of the officials. The two other officials confirmed al-Masri’s killing but could not provide specific details.

Al-Masri was gunned down in a Tehran alley on August 7, the anniversary of the 1998 bombings of the US embassies in Nairobi, Kenya, and Dar es Salaam, Tanzania. Al-Masri was widely believed to have participated in the planning of those attacks and was wanted on terrorism charges by the FBI.

Al-Masri’s death is a blow to al Qaeda, the terror network that orchestrated the September 11, 2001, attacks in the US, and comes amid rumors in the Middle East about the fate of the group’s leader, Ayman al-Zawahiri. The officials could not confirm those reports but said the US intelligence community was trying to determine their credibility.

Two of the officials – one within the intelligence community and with direct knowledge of the operation and another former CIA officer briefed on the matter – said al-Masri was killed by Kidon, a unit within the secretive Israeli spy organization Mossad allegedly responsible for the assassination of high-value targets. In Hebrew, Kidon means bayonet or ‘tip of the spear’.

The official in the intelligence community said al-Masri’s daughter, Maryam, was also a target of the operation.

The US believed she was being groomed for a leadership role in al Qaeda and intelligence suggested she was involved in operational planning, according to the official, who like the others, spoke on condition of anonymity to discuss sensitive intelligence. 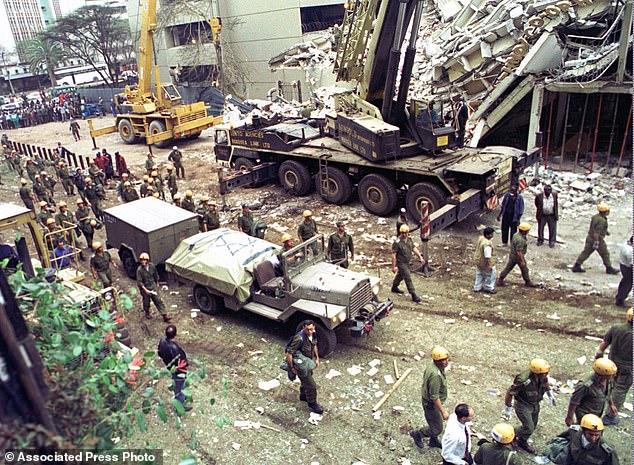 Al-Masri’s death came exactly 22 years after he masterminded bombings on US embassies in Kenya and Tanzania, killing 224 people. Pictured: Wreckage in Nairobi on August 9, 1998, following a bombing near the US Embassy in which 158 people died and 4,824 were injured 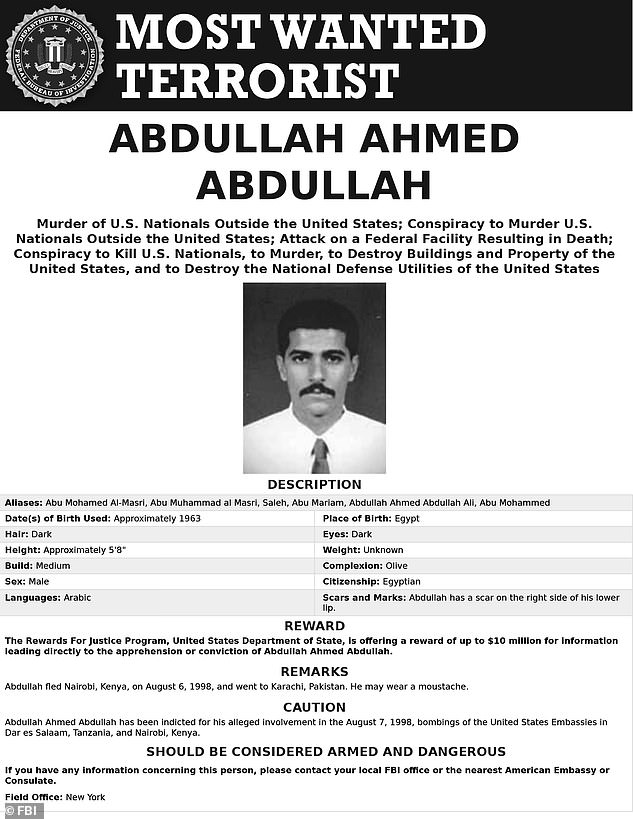 Al-Masri’s daughter was the widow of Hamza bin Laden, the son of al Qaeda mastermind Osama bin Laden. He was killed last year in a US counterterrorism operation in the Afghanistan-Pakistan region.

The news of al-Masri’s death was first reported by The New York Times.

Both the CIA and Israeli Prime Minister Benjamin Netanyahu’s office, which oversees the Mossad intelligence agency, declined to comment.

Israel and Iran are bitter enemies, with the Iranian nuclear program Israel’s top security concern. Israel has welcomed the Trump administration’s withdrawal from the 2015 Iranian nuclear accord and the US pressure campaign on Tehran.

At the time of the killings, the Trump administration was in the advanced stages of trying to push through the UN Security Council the reinstatement of all international sanctions on Iran that were lifted under the nuclear agreement.

None of the other Security Council members went along with the US, which has vowed to punish countries that do not enforce the sanctions as part of its ‘maximum pressure’ campaign on Iran.

Israeli officials are concerned the incoming administration of President-elect Joe Biden could return to the nuclear accord.

It is likely that if Biden does engage with the Iranians, Israel will press for the accord to be modified to address Iran’s long-range missile program and its military activity across the region, specifically in Syria and its support for groups like Hezbollah, Hamas, and Islamic Jihad.

The revelations that Iran was harboring an al Qaeda leader could help Israel bolster its case with the new US administration. 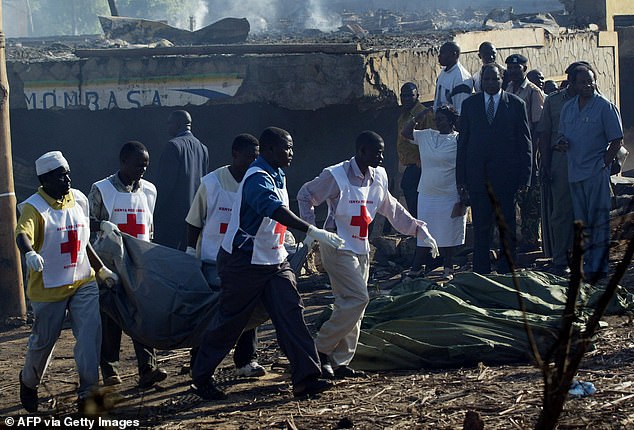 Kenyan Red Cross volunteers carry the bodies of the victims of the Paradise Hotel bomb blast in Mombasa on November 28, 2002. The attack is said to have been ordered by al-Masri 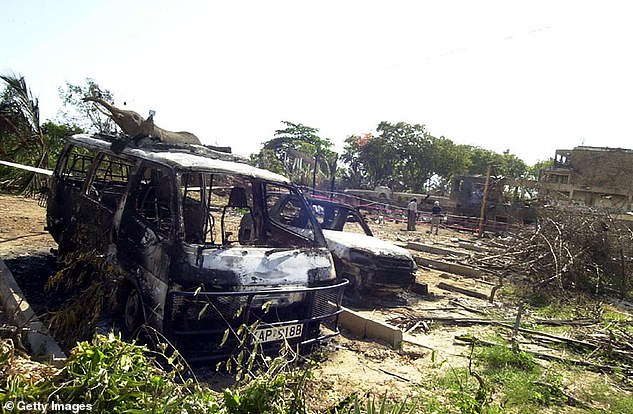 Charred remains of the Paradise Hotel are seen on November 29, 2002 near Mombasa, Kenya. Three suicide bombers blew themselves up at the Israeli-owned hotel killing 16, mostly Kenyans, and wounding dozens more. Al-Masri is said to have ordered the attack

Al-Masri had been on a kill or capture list for years, but his presence in Iran, which has a long history of hostility toward al Qaeda, presented significant obstacles to either apprehending or killing him.

Iran denied the reports, saying the government is not harboring any al Qaeda leaders and blaming the US and Israel for trying to foment anti-Iranian sentiment.

Two US officials who spoke to AP – one within the intelligence community and with direct knowledge of the operation and another former CIA officer briefed on the matter – said Abu Muhammad al-Masri was killed by Kidon, a unit within the secretive Israeli spy organization Mossad.

In Hebrew, Kidon means bayonet or ‘tip of the spear’.

Kidon is considered one of the most elite and dangerous special ops units in the world, credited with carrying out a number of high-profile assassination campaigns.

It’s unclear when the unit was founded, but experts speculate it may have been sometime in the 1960s as intelligence-related activities ramped up worldwide amid the Cold War.

Kidon is estimated to have fewer than 75 operatives, according to Spec Ops Magazine, which profiled what little information is available about the unit in October 2020.

Operatives are believed to be recruited to Kidon after showing an exemplary record in either intelligence or special operations, or both.

Recruits spend up to two years training in Israel’s Negev desert before being officially accepted to Kidon.

US officials have long believed a number of al Qaeda leaders have been living quietly in Iran for years and publicly released intelligence assessments have made that case.

Al-Masri’s death, albeit under an assumed name, was reported in Iranian media on August 8.

Reports identified him as a Lebanese history professor potentially affiliated with Lebanon’s Iranian-linked Hezbollah movement and said he had been killed by motorcycle gunmen along with his daughter.

The deaths of al-Masri and his daughter occurred three days after the catastrophic August 4 explosion at the port of Beirut and did not get much attention.

Hezbollah never commented on reports and Lebanese security officials did not report that any citizens were killed in Tehran.

A Hezbollah official on Saturday would not comment on al-Masri’s death, saying Iran’s foreign ministry had already denied it.

The alleged killings seem to fit a pattern of behavior attributed to Israel in the past.

In 1995, the founder of the Palestinian militant group Islamic Jihad was killed by a gunman on a motorcycle in Malta, in an assassination widely attributed to the Mossad.

The Mossad also reportedly carried out a string of similar killings of Iranian nuclear scientists in Iran early last decade. Iran has accused Israel of being behind those killings.

Yoel Guzansky, a senior fellow at the Institute for National Security Studies and former analyst on Iranian affairs in the prime minister’s office, said it has been known for some time that Iran is hiding top al Qaeda figures.

While he had no direct knowledge of al-Masri’s death, he said a joint operation between the US and Israel would reflect the two nations’ close intelligence cooperation, with the US typically stronger in the technical aspects of intelligence gathering and Israel adept at operating agents behind enemy lines.