Rome: Talks aimed at reviving Italy’s collapsed ruling coalition were blocked on Monday over policy issues even before any discussion was held on who the prime minister should be, political sources said.

Prime Minister Giuseppe Conte was forced to resign last week when a junior partner, Italia Viva, quit the 17-month-old coalition in a row over its handling of the coronavirus pandemic and subsequent economic meltdown. 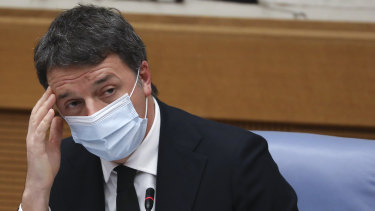 Matteo Renzi’s Italy Viva party is tiny, but without it the government doesn’t have a parliamentary majority.Credit:Bloomberg

The speaker of the lower house of parliament, Roberto Fico, has been leading mediation efforts since Friday between the coalition parties.

He was due to report back to Italian President Sergio Mattarella on his progress on Tuesday, but with time running out little progress has been made, sources familiar with the discussions said.

Political sources say Italia Viva, headed by former premier Matteo Renzi, wants to see a major cabinet shake-up, including the removal of Economy Minister Roberto Gualtieri, a leading PD figure, to signal a clear break with the past.

However, PD sources, as well as political sources outside the party, said they would not let Gualtieri be sacrificed.

“Renzi kicks up four or five dust storms, but then settles back on more achievable goals,” a PD minister told Reuters, declining to be named because of the sensitivity of the issue.

Separately a source who had talked with Mattarella, the man tasked with finding a solution to the turmoil, said the head of state wanted “continuity” in the main ministries, including the economy, health and defence portfolios.

The PD and the other main ruling party, the anti-establishment 5-Star Movement, both want Conte reinstated as prime minister, but Renzi has so far refused to give his backing.

Aside from the choice of PM and ministers, talks are still stuck over policy, party sources said.

Italia Viva is pushing for the country to take a loan from the euro zone bailout fund to help its coronavirus-battered health service, something that is strongly opposed by the 5-Star Movement.

5-Star, for its part, is calling for more resources for its flagship policy of income support for the poor, which is rejected by Italia Viva.

Although Renzi’s tiny party has barely 2 per cent of voter support, it shows no sign of backing down in its demands.

“Nobody’s place can be guaranteed,” Teresa Bellanova, a prominent 5-Star senator and former minister, said when asked about the PD’s insistence that Gualtieri must not be sacrificed.

She said if a political accord could not be found, the party would support the creation of a government of technocrats that would need cross-party support in parliament.

An Italia Viva source said that if a government of this nature were installed, the party would like former European Central Bank chief Mario Draghi to lead it.