It's a Banksy robbery! Bicycle 'stolen,' from hula-hooping girl art

It’s a Banksy robbery! Bicycle that appeared as part of graffiti artist’s image of a hula-hooping girl in Nottingham ‘is stolen’

A bicycle that appeared as part of Banksy’s artwork of a hula-hooping girl in Nottingham has gone missing.

Locals were delighted when the elusive artist adorned the outside of a salon wall with a black-and-white stencil of a girl hula hooping with a bicycle tyre on October 13.

But the bike chained to a post in front of the wall in Rothesay Avenue as part of the piece has now gone missing. 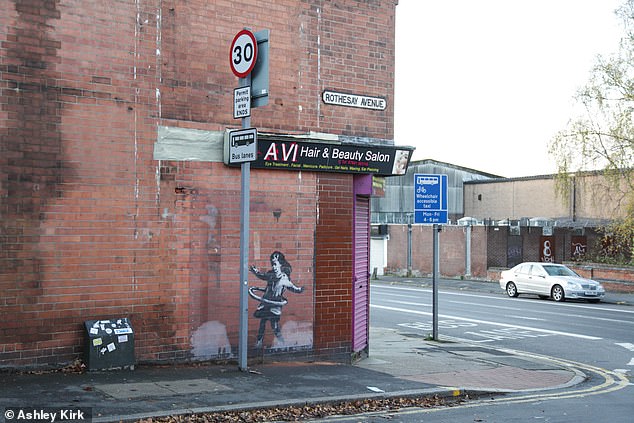 Locals are ‘saddened,’ after a bike, which formed part of a Banksy mural that arrived in Nottingham in October, disappeared this weekend

Resident Tracy Jayne discovered it had vanished on Sunday morning.

She told the BBC: ‘The artwork records an important part of Nottingham’s history, Raleigh bikes.

‘It’s such a shame if someone has stolen the bike. It’s sheer disrespect and saddens me very much.’ 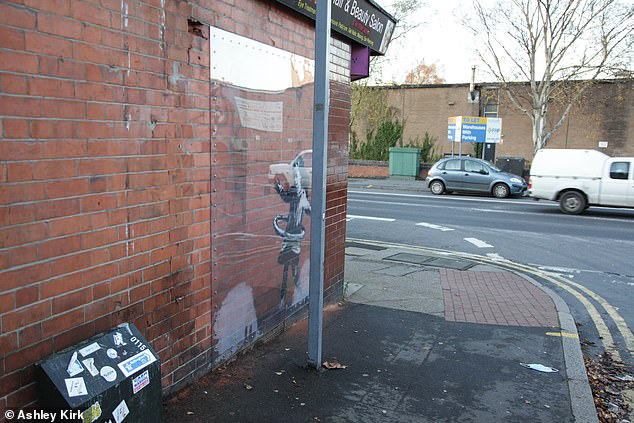 Tracy Jayne discovered the bike was missing on Sunday morning, she said it showed ‘sheer disrespect,’ against the artwork, which has been covered to prevent it being vandalised

Speaking at the time the artwork appeared, Surinder Kaur, 42, who runs the beauty salon next to the artwork, said the bike had appeared at the same time as the mural.

‘He brought the bike with him – there is one tyre on the bike and the other tyre is in the picture as the little girl’s hula hoop,’ Kaur said.

She told the PA news agency that within hours, the council had rushed to protect the piece by placing clear plastic sheeting over it.

Valuers believe the piece was worth more than £214,000 average house price on the Nottingham street. 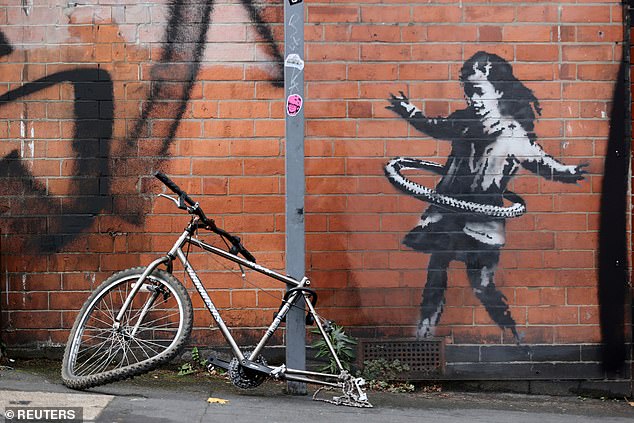 Surinder Kaur, 42, who runs the beauty salon next to the artwork, said the bike had appeared at the same time as the mural 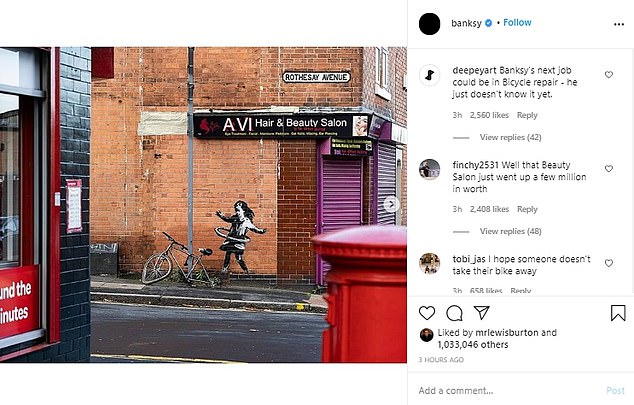 When Banksy claimed the artwork on October 17, one follower said ‘I hope someone doesn’t take their bike away’

Banksy claimed the artwork by sharing it on his Instagram page on October 17.

One follower replied at the time: ‘I hope someone doesn’t take their bike away.’

According to the BBC, the bike’s disappearance has not been reported to Nottinghamshire Police or Nottingham City Council.