Aged care workers who have received their first dose of the Pfizer vaccine are being turned away when trying to get their second shot, with some doctors being told there is no record of them being inoculated.

Self-employed general practitioner Lisa Rogers, who works in three aged care homes in Melbourne’s east, received her first Pfizer dose about a month ago and is still waiting for her second shot.

“It’s been terrible. We’re all in a big mess at the moment and there’s actually lots and lots of us,” she said. 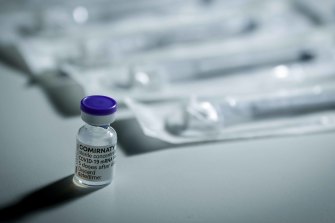 The Pfizer vaccine must be used within two hours of being thawed, so some doses have been given to health workers to avoid wastage.Credit:Eddie Jim

The Pfizer vaccine must be stored at minus 70 degrees in ultra-low-temperature freezers and must be used within two hours of being thawed. Each vial contains six doses.

To avoid wasting Australia’s limited supply of the vaccine, private contractors who have been inoculating aged care residents as part of the federal government’s vaccine rollout have used leftover doses to immunise healthcare workers.

Karen Price, national president of the Royal Australian College of General Practitioners, said she had heard reports that when these health workers had tried to book an appointment for their second shot, some had been refused and told there was no record in the Australian Immunisation Register of them receiving their first shot.

“Getting the right second dose is critical,” Dr Price said. “You can’t give them a first dose of Pfizer and a second dose of AstraZeneca. That is just absolutely not on. The planning for the second dose has to be watertight.”

And the clock is ticking: people need to have their second dose after at least 21 days, although up to 42 days between doses is permissible when a delay is unavoidable, the US Centres for Disease Control and Prevention has said.

Dr Rogers was volunteering her time to monitor elderly residents for adverse reactions to the vaccine when a shot was given to her by Aspen Medical staff after a number of Pfizer vials were left over from residents.

“We were advised then that if we got our first dose we were guaranteed our second one when the Aspen team came out to the aged care facility again, and we would be notified on which day this would happen,” she said.

“The problem has been that GPs working in aged care facilities have been on nobody’s radar this whole vaccination rollout, even though we’re the ones that provide most of the medical care at aged care facilities. It’s like we don’t exist and the problem is we’re a really high-risk group.”

Last week, Dr Rogers went to an aged care facility with two colleagues to get their Pfizer boosters, only to be told there were not enough vials. She spent days last week trying to get her second shot at Pfizer hubs in Melbourne before being told it was not possible to book her in as there was no record of her receiving the first shot.

The Age and Sydney Morning Herald previously revealed that only half of the nation’s aged care residents have been vaccinated in the past six weeks, falling well short of the government’s plan to have all residents and workers vaccinated in that time.

Dr Rogers estimates dozens of her Victorian colleagues are in the same situation and she has heard similar reports from doctors interstate. “There are staff who work closely with the elderly such as nursing staff and personal care assistants who have got their first dose and they can’t get a second dose and they have no voice in all of this,” she said.

She said the healthcare workers were told by the Victorian Vaccination Control Centre to get their Pfizer boosters through their GPs, even though most GP clinics do not have the correct freezers.

Dr Price said the medical college had raised the matter with the federal government, labelling the delays unacceptable. The college was still determining how many healthcare workers had been affected.

The Department of Health recommends all Australians get two doses of the same type of COVID-19 vaccine.

“This is because the evidence from clinical trials shows this is effective and is what is approved for use by the Therapeutic Goods Administration,” the department says on its own website.

Associate Professor Paul Griffin, director of infectious diseases at Mater Health in Queensland, said it was difficult to determine the implications for people who received their second Pfizer dose beyond the 42-day period.

“We just haven’t done the studies to know this yet, so it’d be really hard to know exactly what the protection would be if the second dose was extended beyond that recommended period,” he said.

“It is very likely that it will probably have minimal impact. We know that coverage from a single dose is probably in the order of 60-odd per cent and it goes up to those quoted figures of about 95 per cent or thereabouts after the second dose.”

Professor Griffin said delays in adequately protecting doctors and health workers caring for some of the country’s most vulnerable people against coronavirus were “simply unacceptable”.

“We have to get this right,” he said.

A federal Health Department spokeswoman said to minimise wastage some vaccines were administered to those eligible under phase 1a when excess doses were left following vaccination of residents. She said generally a second dose was given when medical teams returned to the aged care facilities to give residents their booster shots.

“There are some people who have not been able to present to the aged care facility to receive their second dose,” she said.

She said primary health networks were working with aged care facilities to ensure those who get their first Pfizer vaccine get their second dose, and she urged those waiting for their second dose to contact their local network. “People can access evidence of their COVID-19 vaccines in their immunisation history record through Medicare Online, the Medicare app.”

Australia’s vaccine rollout has been marred by delays, with some Australian GPs saying they have been set up to fail as the federal government allows millions of patients to book appointments while providing few doses to clinics

Victoria is having to throw out about three in every 1000 Pfizer doses that were destined for hotel quarantine workers, according to the Department of Health.

On Tuesday night a spokesperson for Aspen Medical said the company had identified that some healthcare workers had been vaccinated at aged care facilities but “did not have their first vaccination recorded accurately on the Australian Immunisation Register”.

“We would like to apologise to those healthcare professionals concerned for any inconvenience caused,” the spokesperson said.