ITV News editor behind ‘Partygate’ scoops is appointed new CEO: Mother-of-two will take up role in September – after programme was given hour-long slot in scheduling shake-up in January

The ITV News editor behind the broadcaster’s ‘Partygate’ scoops has today been appointed its new CEO.

Mother-of-two Rachel Corp will take up the role in September, just months after the programme was given an hour-long slot in a scheduling shake-up.

As editor, she has held overall responsibility for the vision, strategy and direction of all of ITV’s national news programmes and digital output, including some of the biggest stories of the last few years.

This includes the now infamous clip of Allegra Stratton, then the PM’s press secretary, and Ed Oldfield, No10’s head of digital, rehearsing a question and answer session in the No9 briefing room over Downing Street parties.

Under her stewardship, ITV News has also broken stories on substandard conditions in council housing, an undercover investigation into Amazon’s disposal of unsold products and a global exclusive eyewitness report from inside the storming of the US Capitol.

The role has seen Corp lead a team of more than 300 people in the UK and abroad while overseeing a multi-million-pound budget.

Corp, who lives in Peckham, south London, with her husband, Laurence Lee, a senior reporter for Al Jazeera, and their two young daughters – will take up her new role on September 1, with current CEO Deborah Turness continuing to lead the organisation until then. 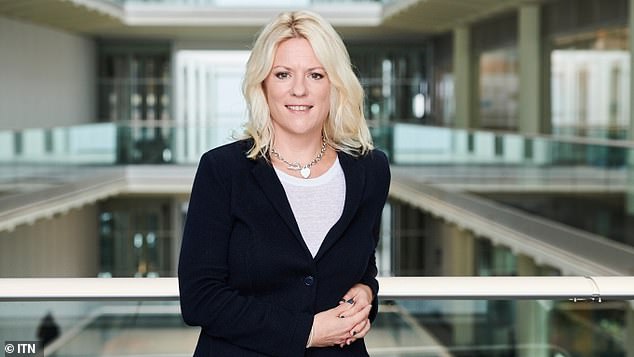 Mother-of-two Rachel Corp will take up the role in September, just months after the programme was given an hour-long slot in a scheduling shake-up 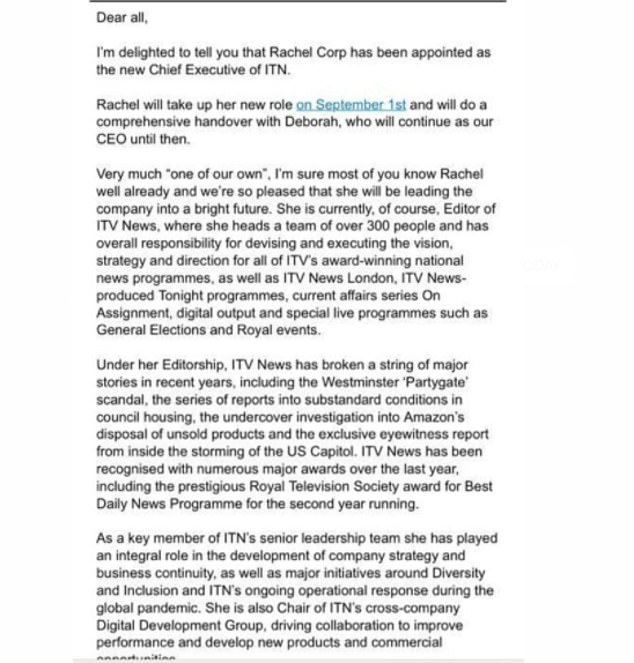 Staff were told of the shake-up, which will take effect later this year, in a note from bosses today

She said: ‘Having worked across ITN for over three decades, I am delighted and honoured to be taking the reins as CEO at such a crucial time for news and journalism, as well as an incredibly exciting stage of the company’s wider development with so many ambitious projects on the horizon across TV production, sports, events and advertising to name just a few.

‘ITN has a huge wealth of talent and creativity right across the company, and I am so proud to be leading the organisation I care passionately about into its next chapter.’

Kyla Mullins, Chair of the ITN Board, added: ‘Rachel is an outstanding leader, with a strategic focus, creative mindset, sharp entrepreneurial instincts and impeccable journalistic credentials.

‘Having risen through the ranks at ITN she knows the organisation back to front, and she will bring a relentless drive for success and a lot of energy and know-how to the role. We’re delighted that she will be leading the company into a bright future.’

Corp first joined ITN as a trainee and her early career included working on the launch of 5 News, as well as the roles of North of England and Senior Field Producer, covering major stories in the UK and abroad, from Kosovo, Afghanistan and Iraq to the Hutton Inquiry and the Soham murders.

Following spells as the BBC’s Senior Moscow Producer and as Head of Channels at digital production company WebsEdge, she returned to ITV News as a News Editor, rising to Deputy Head of Home News and Head of Home News.

She went on to become Editor of ITV News London, overseeing the London Mayoral Election live debates, coverage of the EU Referendum and agenda-setting investigations such as the West London Coroner’s Service.

She moved to ITN stable-mate 5 News as Editor in 2017, leading the team through its coverage of terror attacks, the Grenfell disaster and a snap general election, and setting the agenda with committed coverage on the issue of sexual harassment.

Corp then returned to ITV News in 2018 and has led the newsroom across multiple elections, Brexit, the Trump presidency, the Covid pandemic, the climate crisis and the war in Ukraine.

The new CEO has spoken previously of her news philosophy, in making sure there is an ‘absolute priority on eyewitness journalism’, and pushing for more stories in areas outside the capital.

In March, ITV News extended to hour-long shows, moving its popular soaps to new times in a major shake-up.

The revamped news bulletins, running from 6.30pm to 7.30pm, are designed to bring more live coverage and a greater focus on reporting from outside of London to reflect the whole of the UK, ITV said.

The changes, which ITV has said are to ‘bolster the key programmes in its pre-9pm schedule’, have also seen the broadcaster’s flagship soap Coronation Street moving to hour-long episodes on Monday, Wednesday and Friday at 8pm, while Emmerdale will move to a 7.30pm slot.

The broadcaster said it would also recruit a host of new talent, including 27 new journalists, producers and multi-skilled camera operators/video editors, to accommodate the expansion.

The new appointments include correspondents being taken on in Wales, Scotland and the north of England.