The Japanese space explorer Hayabusa-2 is about to complete its six-year 5.1-billion-kilometre journey by hurtling down to earth in the Australian desert.

And when the capsule, carrying precious samples of a 4.5 billion-year-old asteroid finally makes its landing at the Woomera test range in South Australia, a Japanese recovery team will be there waiting.

JAXA's preliminary team of 14 people arrived there on Wednesday, following two weeks of mandatory quarantine, the agency said on Twitter.

"The preliminary team is still preparing in Woomera today," the Hayabusa2 account tweeted. "The sun is strong, but work is progressing steadily. The sky is a deep blue."

The capsule will be released by the Hayabusa2 space craft into the upper atmosphere, where it is due to parachute into the Woomera test range on December 6.

It's expected to land within a 100-150km area where it will send a radio signal that the Japanese team will track down. 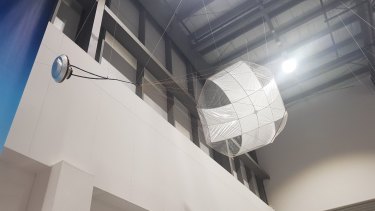 By then, a second larger recovery team, which arrived in Adelaide on November 10, will also be on the scene. Currently the larger team remains in quarantine in South Australia.

Launched on December 3, 2014, Hayabusa-2 is the second such "return exploration" mission by JAXA. It arrived at the Ryugu asteroid in June 2018, which it shadowed for a year and a half, deploying purposely built "hopping" rovers to explore the surface.

Hayabusa-2, which means "peregrine falcon" in Japanese, then performed a delicate operation to take samples from Ryugu's surface before departing on November 2019 for its return trip.

After nearing Earth to drop the capsule, Hayabusa will fire its engines to adjust course to manoeuvre past our planet and continue its exploration of the solar system. 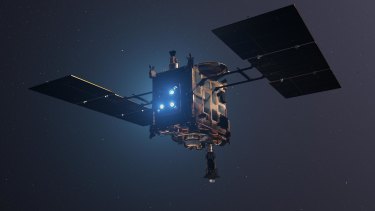 An artist’s rendering of JAXA’s Hayabusa-2 firing its ion thrusters in space.

The samples contained in Hayabusa-2 will allow scientists to learn more about the origins of life in the solar system. Hayabusa-2 is the second such "return exploration" conducted by Japan, following Hayabusa-1 which also landed in Woomera back in 2010.

South Australia-based Alice Gorman of Flinders University says that in conducting missions like this, the Japanese space agency is "exploiting a niche that hasn't been fully explored before".

"With accelerated plans in using resources from the moon and asteroids, this is critical information for knowing what's in near-Earth asteroids for use by humans." 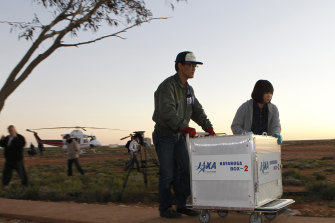 Research team waiting for the first Hayabusa capsule drop in 2010.

Australia's cooperation with Japan on the recovery of the capsule underscores the long-standing ties between the two countries in space.

“We would like to express our gratitude for the support of Australia in helping Japan achieve new goals in space with the Hayabusa-2 mission," said Kazuyoshi Matsunaga, Consul-General of Japan in Melbourne.

During the bushfires, data from Japan's Himawari satellite was used to give information to emergency service authorities in Australia, Matsunaga said.

The capsule's contents could shed further light on the presence of water in the solar system beyond earth, said Gorman who has pioneered the study of space archaeology. "It's going to be really exciting what we see out of the Hayabusa-2 sample."

After Hayabusa-2's flyby of Earth, it will carry out an extended mission to rendezvous with another asteroid in 2031, which could shed light on the types of asteroids that threaten the earth.

While other agencies have launched space probes of asteroids before, Japan has pioneered the collection and return of asteroid material from space.

In October, NASA's OSIRIS-REx spacecraft made contact with the asteroid Bennu to scoop up sample material.