The jihadi inmate who knifed two prison guards in France before watching his pregnant wife being gunned down in front of him was ‘avenging’ the killing of Strasbourg terrorist Cherif Chekatt, it emerged today.

Michael Chiolo, 27, and his wife Hanane Abouhana had locked themselves inside the ‘family facility’ of the high security Alencon-Conde-sur-Sarthe prison in Normandy, after he attacked two guards while shouting ‘Alluhu Akbar’ – Arabic for ‘God is the Greatest’.

The couple launched a ten-hour standoff from inside the room, after which police moved in and shot and injured them both, fatally wounding the unnamed woman. 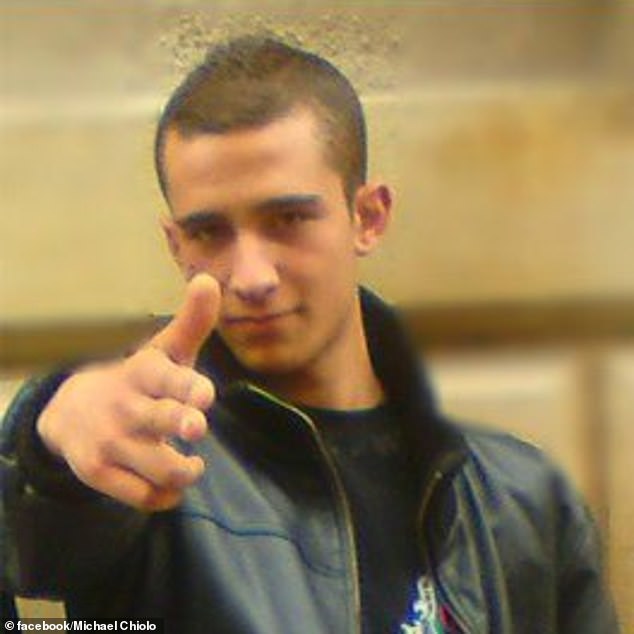 Michael Chiolo, 27, launched an Islamist terrorist attack from inside the Alencon-Conde-sur-Sarthe prison in Normandy, and he attacked two guards with a knife his pregnant wife is thought to have smuggled in for him during a conjugal visit

The Paris state prosecutor said witness accounts suggest Chiolo ‘wanted to avenge’ Cherif Chekatt, the Islamist terrorist who was shot dead by police after killing five people and wounding 11 at a Christmas market in the eastern French city of Strasbourg in December.

‘(He) said he wanted to avenge Cherif Chekatt,’ prosecutor Remy Heitz told reporters.  ‘He said he was wearing an explosive belt and threatened to use it.’ The belt turned out to be fake.

After the attack on the prison guards, dozens of their colleagues torched tyres and palettes outside the high-security facility to protest their working situation. 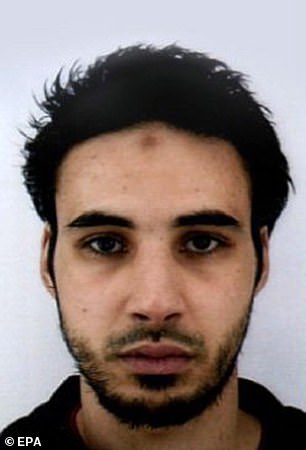 Chiolo is said to have wanted to avenge Cherif Chekatt, the Islamist terrorist shot by police after killing five and wounding 11 at a Christmas market in Strasbourg, France

The protest has since spread across France, with 18 French prisons being targeted by blockades by guards.

In a statement, the main CGT union said attacks against guards are becoming more common and intolerable, and that the penal population was becoming ‘increasingly vindictive, aggressive and violent’.

Despite being described by a judge as a ‘psychopath’ before being handed a 30-year-sentence in 2014 for murdering a Holocaust survivor, Chiolo had been granted regular family visits.

‘The anti-terrorist section of the public prosecutor’s office of Paris is involved in the incident, which is ongoing.’

Ms Belloubet said the inmate’s wife ‘feigned illness’ at around 9.45am, leading to two prison officers arriving in a room in the family unit, which is designed to give couples privacy during visiting hours.

Chiolo slashed out with his knife, wounding one man in the chest, and the other in the back and face. Both have since been treated, and neither is in a life-threatening condition.

‘It was truly a murder attempt. There was blood everywhere. The family-visiting unit was a battle scene,’ said prison staff representative Alassanne Sall, from the Force Ouvriere trade union, told AFP. 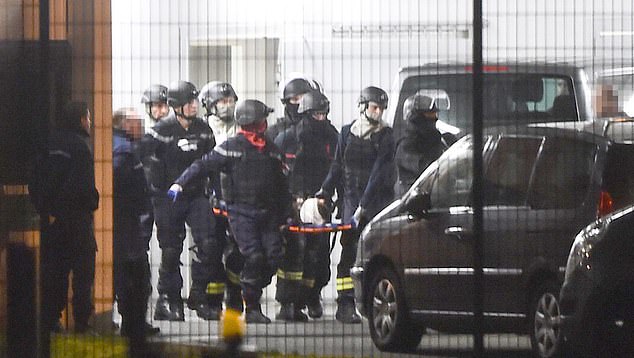 Army and police officers near the high security Alencon-Conde-sur-Sarthe facility, where Chiolo, 27, and his wife locked themselves inside the ‘family facility’ and launched a ten hour standoff with police 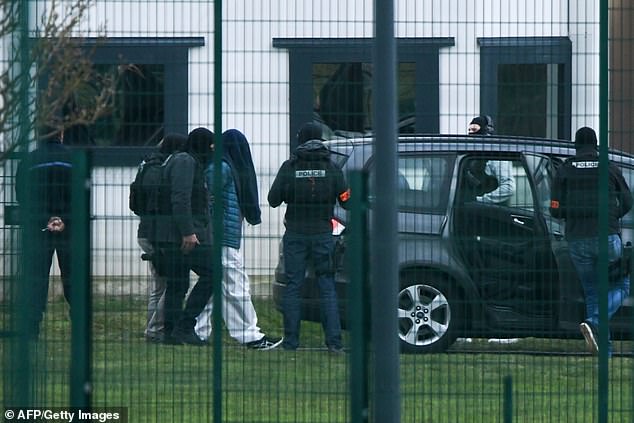 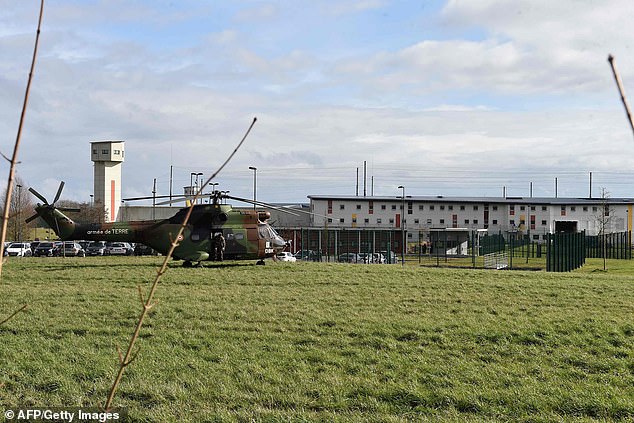 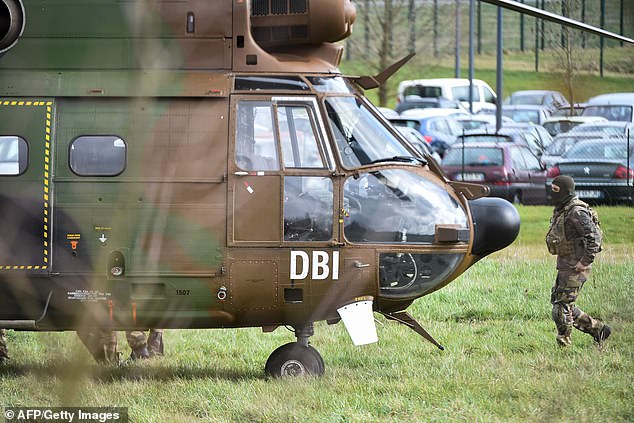 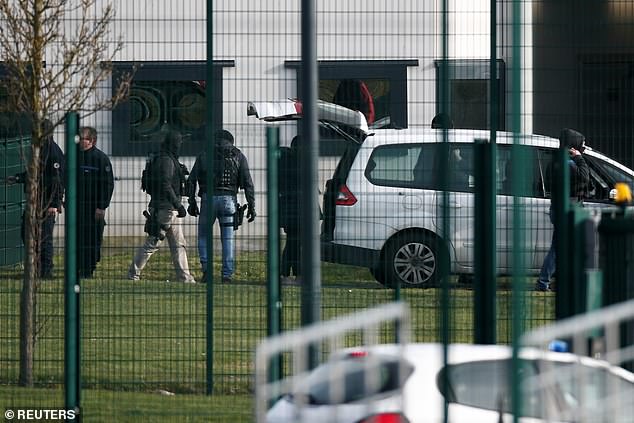 Chiolo, a Muslim convert who had become radicalised in prison, was serving a 30-year-sentence for killing an 89-year-old Holocaust survivor during a robbery

Chiolo’s wife is thought to have smuggled a ceramic knife into the prison, and there were also fears that explosives may also have been made available to her husband.

As she was pregnant it is unlikely that she would have been searched as rigorously as other visitors when she went to see her husband.

After the attack, the couple remained in the family unit, and at around 6pm anti-terrorist police stormed their locked room.

‘There were explosions, and gun shots, and then the husband was wounded but arrested,’ said a prison source. ‘His wife died from gunfire wounds, however.’

Chiolo was serving a 30-year sentence for kidnapping leading to a death, armed robbery and condoning terrorism. 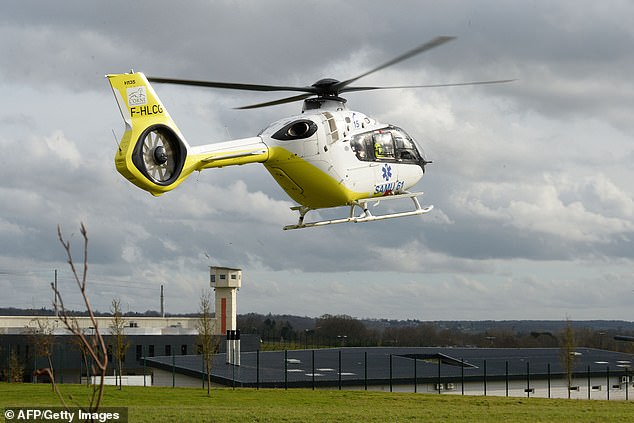 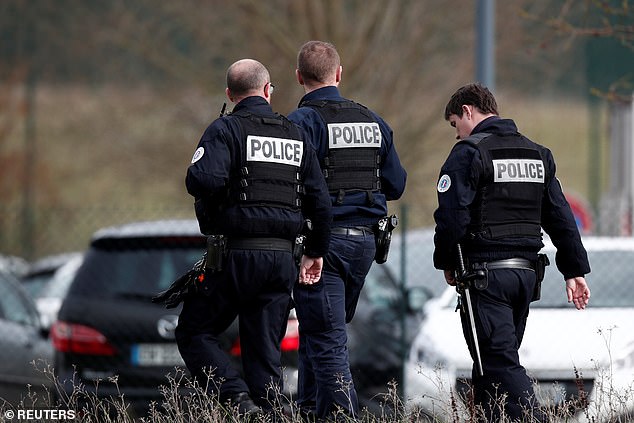 Police in protective vests scan a car park outside the prison where Chiolo, who married his wife from inside the prison, attacked two guards 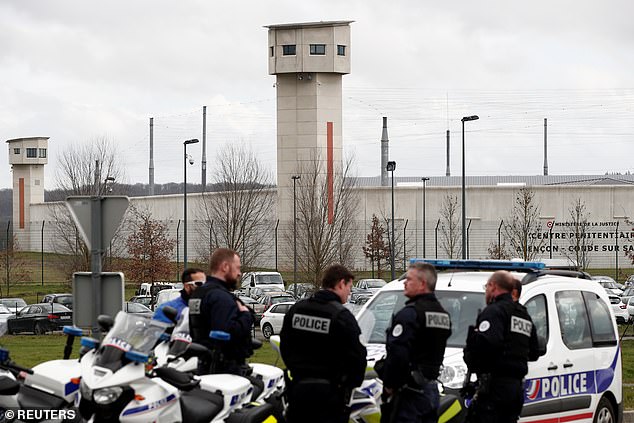 His wife, thought to have smuggled in the knife for him, ‘feigned illness’ at around 9.45am yesterday, luring the prison officers to the room after which they got stabbed

In 2012,  Chiolo, later branded a ‘psychopath’ by a judge, and two others killed Holocaust survivor Roger Tarall, 89,  during a burglary at Montigny-les-Metz, close to the German border in eastern France.

Mr Tarall had been arrested by the Gestapo and deported to Dachau during the Second World War, but survived the notorious camp near Munich.

‘Mr Tarall was threatened with a shotgun and then tied up with wires and blankets,’ said a source close to the case. ‘He died from asphyxiation.’

The source added: ‘Chiolo was caught soon afterwards after boasting about the murder to a girlfriend.’

During his time in prison he converted to Islam and was radicalised, his lawyer Pauline Brion said.

Ms Brion, who described her client as ‘intelligent’ and ‘educated’ said he met his partner while in prison and that he intended to marry her.

‘He had written to someone after converting (to Islam) for them to find him a wife,’ the lawyer told AFP.

While serving time Chiolo had another year added to his sentence for for asking fellow inmates to ‘reenact’ the November 2015 ISIS terror attack on the Bataclan concert hall in Paris.

‘After Paris, I would have carried on in other parts of the country,’ he reportedly told another inmate, according to prison staff. 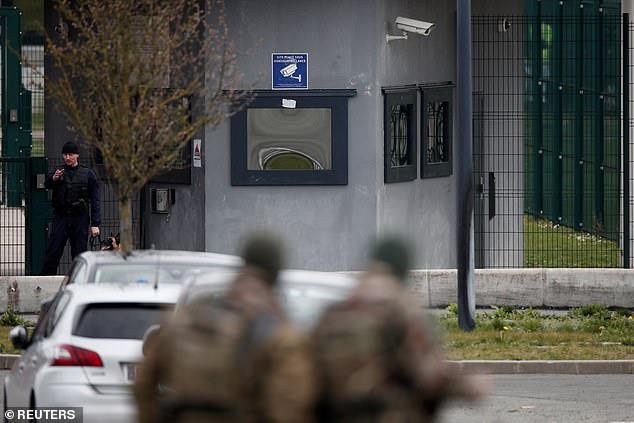 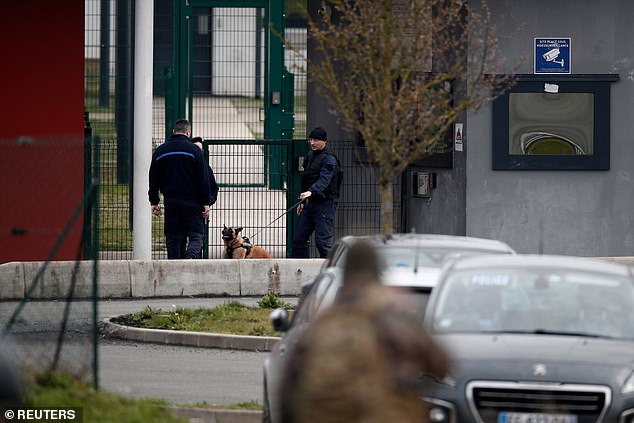 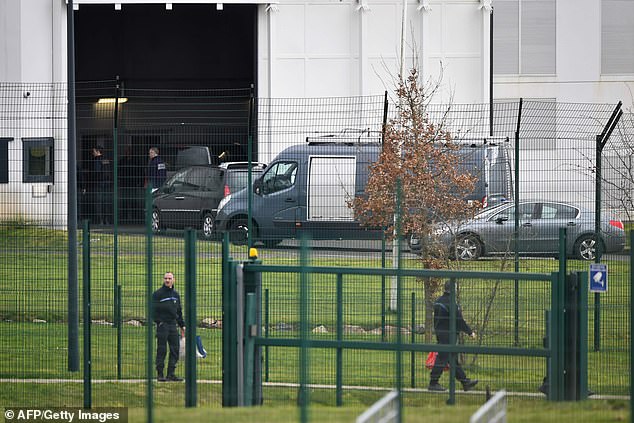 Policemen and prison guards at the entrance to the complex where the couple launched a ten-hour standoff from inside the ‘family room’, after which police moved in and shot and injured them both, fatally wounding the unnamed woman

But despite having been identified as an extremist, Chiolo was not housed in a secure wing for radicalised inmates which was opened in September, she added.

Chiolo was ‘not easy to handle and so a very close eye was kept on him,’ the minister added.

The first ‘jihadist attack’ launched from within a prison in France took place in September 2016, according to prison authorities.

A Moroccan, jailed for attempting to travel to Syria to join jihadists, attacked two guards with a knife at a prison in Osny, northwest of Paris, saying he was acting on behalf of the Islamic State.

Then in January 2018, a German Islamist extremist, Christian Ganczarski, jailed for helping organise an attack against a synagogue in Djerba, Tunisia, wounded three prison guards in a knife attack at Vendin-le-Vieil, northern France, prompting staff to demand better safety and working conditions.