Joe Biden raised eyebrows on the campaign trail on Monday after telling a group of ‘beautiful young ladies’ he wanted to ‘see them dancing when they’re four years older too’.

Biden made the remark during a campaign stop in Miami, paying tribute to the dancers who had performed for him at the city’s Little Haiti Cultural Center.

The Democratic nominee appeared to point to a group of young girls in traditional Haitian costume as he made the comment.

While Biden clearly meant to refer to the four-year presidential term, suggesting he would like to be back for a re-election campaign in 2024, his clumsy wording led to a wave of online scorn at ‘Creepy Joe’, as critics like to call him. 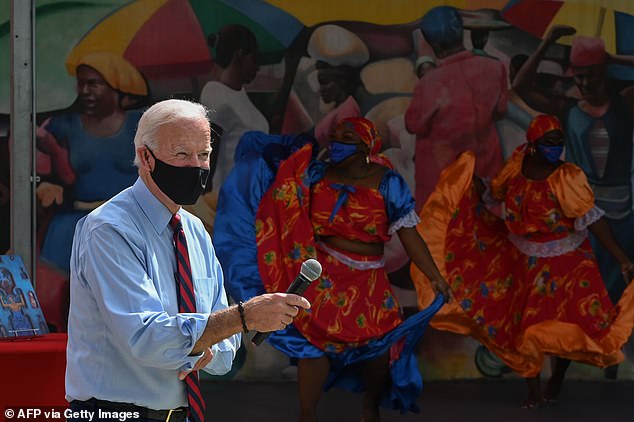 Joe Biden watches a traditional Haitian dance at the Little Haiti Cultural Complex in Miami on Florida, where he raised eyebrows with a remark to young dancers

One viewer said of the video that ‘Biden is so creepy he makes my skin crawl’, while another said the former vice president was a ‘walking accident waiting to happen’.

Former NFL player Herschel Walker, a Trump supporter, said that ‘telling young African-American girls “I want to see you dancing when you’re four years older” is not only creepy but racist’.

Even those who saw what Biden meant acknowledged that his remark was a ‘terrible way of phrasing it’.

When asked about the incident by Fox News, the Biden campaign sent a link to Article II of the Constitution, highlighting the part which says the president’s term is four years.

Biden, 77, would be the oldest president ever to sit in the Oval Office, even older than Ronald Reagan at the end of his eight-year term.

His push for votes in Florida comes with polls showing Biden narrowly ahead in the battleground state, which backed Trump by a small margin in 2016.

Trump was the oldest president ever elected at 70, and would also beat Reagan’s record if he won a second term and served until January 2025.

The president has tried to stir fears about Biden’s health while boasting of his own physical and mental fitness, including after his release from hospital on Monday.

Trump claimed earlier this year that he had dazzled doctors by reciting ‘person, woman, man, camera, TV’ in a memory test, but Biden has dismissed the issue and polls suggested he had made the better impression in last Tuesday’s debate.

Biden has made a number of verbal gaffes during the campaign, saying in June that ‘we have over 120million dead from Covid’, meaning 120 thousand.

But Trump too is known for his verbal nonsense, including a claim that the Spanish Flu pandemic of 1918 helped to end World War II – which did not begin until 1939. 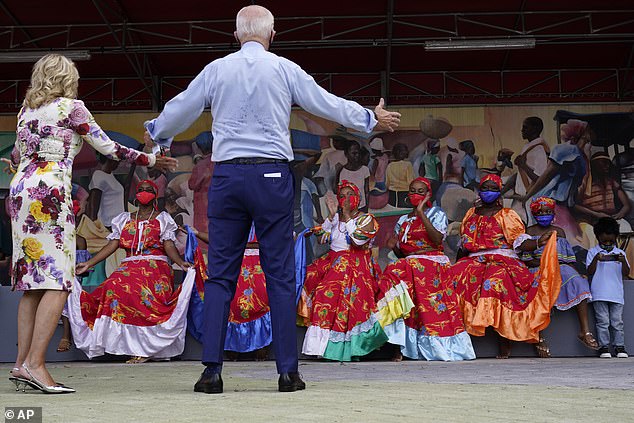 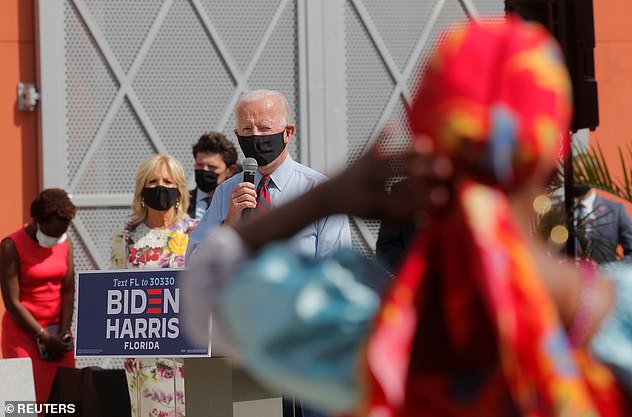 Biden looks at one of the dancers during the performance on Monday, in a state which is likely to be closely fought in the November 3 election

During the Democratic primary campaign, footage of the ‘touchy-feely’ Biden led to a debate about whether his habitual physical contact with voters was affectionate or inappropriate.

One photo showed Biden with his hands on a woman’s shoulders and his head pressed against her hair at a White House ceremony while he was vice president.

But the woman in the picture, Stephanie Carter, defended Biden and said he was a ‘close friend helping someone get through a big day’.

Other women said Biden had made them feel uncomfortable, but the former senator said he had never acted inappropriately.

In February this year, some voters reacted queasily after Biden kissed his 19-year-old granddaughter Finnegan on the lips while campaigning for the Iowa caucuses.

Finnegan is the daughter of Joe Biden’s son Hunter, who was at the center of the Ukraine scandal which led to Donald Trump’s impeachment last year.

Trump acknowledged that he tried to persuade Ukraine to open an investigation into Joe and Hunter, who once served on the board of a Ukrainian gas firm.

Democrats said Trump had abused his powers by strong-arming Ukraine, but the president denied there was any ‘quid pro quo’.

Joe Biden’s infant daughter Naomi died in the crash which also killed his first wife Neilia in 1972. He married Jill five years later, and they have a daughter, Ashley.