Union leader John Setka has said he will not stand down from his position despite his wife Emma Walters accusing him of assaulting her.

In a message sent to union leaders late on Friday night Mr Setka rejected Ms Walters’ allegations of assault and said they were used by others as part of a political attack against him. 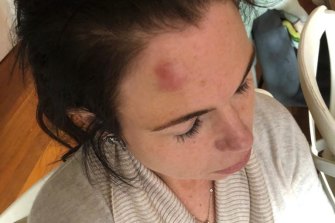 An image of the bruise to Emma Walters’ head after the alleged assault.

“I would never harm my wife and I have done nothing but stand by her,” he said. Mr Setka accused some media and his opponents of “using my personal life” against him.

In a statement to police Ms Walters – a high-profile lawyer and mother of two – said Mr Setka, the Victorian secretary of the Construction, Forestry, Mining and Energy Union, became violent and repeatedly hit her head against a table on Wednesday night, leaving her with a bruise.

“John was out of control. He hit my head against the table about five times,” the statement said. “It was very painful. John is a lot bigger and stronger than me and he can totally physically control me.”

Victoria Police said on Saturday that investigations are ongoing.

An Australian Council of Trade Unions spokesperson said the allegations against Mr Setka “are extremely serious”.

“The ACTU condemns all acts of family and domestic violence and we will continue to fight for the right of every person to be safe at home, at work and in the community.

“We note that this matter is under investigation by the police.”

“His behaviour to women is disgraceful,” he said on Twitter. “He should be sacked. There is no room in leadership of a trade union or society generally for such behaviour. I’m disgusted but not surprised.”

Mr Jordan’s mining division is seeking to leave the broader union as part of the fall-out from Mr Setka’s conduct.

The union’s national construction division secretary Dave Noonan declined to comment as did Victorian Trades Hall Council. Senior CFMMEU officials Chris Cain and Michael Ravbar did not respond to a request for comment.

In 2019, Mr Setka was convicted of harassing Ms Walters and breaching court orders after more than 25 calls and 45 text messages in which he called her a “weak f—en piece of shit” and a “treacherous Aussie f—en c—” and a “f—en dog”. 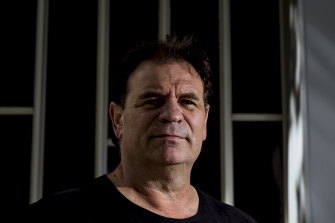 At the time, he resisted pressure from many in Labor and the union movement to resign from his CFMEU role but received support from the construction division and parts of the Victorian union movement. Trades Hall secretary Luke Hilakari was filmed in mid-2019 chanting “John Setka here to stay”.

In his statement Mr Setka alleged that when police arrived on Wednesday night Ms Walters “had no injuries, nor did she claim any”. He said the allegations against him were “false” and “fabricated”.

Ms Walters said that when police first arrived she did not disclose the assault. “There was a lot going on, I was upset and my kids were within earshot and I wanted to protect them,” her statement said.

She made a sworn statement to police the next day of the alleged assault. Images of her head injury over several days show the bruise becoming progressively more visible from quite faint to pronounced.

She had “grave concerns for my physical safety and that of my children and the police are aware of this,” her statement said. “John has repeatedly told me in the past that I am a … ‘piece of shit’ and that he would come after me if I made a statement to the police.”

Do you know more? Send a confidential message to [email protected]