They also called for the return of Jordanian ambassador to Tel Aviv following latest Israeli measures at Al-Aqsa. 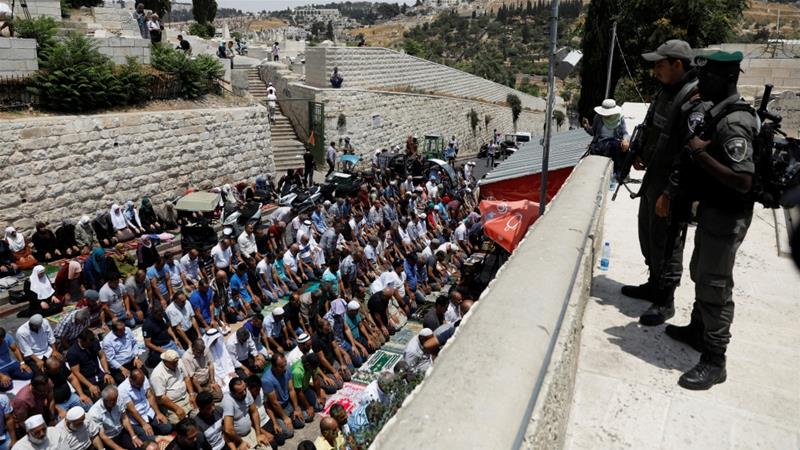 A committee within in Jordan’s parliament called for the expulsion of Israel’s ambassador from the country in response to the latest measures taken by the Israeli army in occupied East Jerusalem.

On Monday, Israeli soldiers placed locks and metal chains on al-Rahma gate of the Al-Aqsa Mosque compound and prevented hundreds of Palestinian worshippers from entering the site, while several were arrested inside the compound.

In a statement read to Jordan’s parliament on Tuesday, the Palestine Parliamentary Committee also called for the return of Jordan’s ambassador from Tel Aviv.

“We call on the government to recall the Jordanian ambassador from Tel Aviv, and to expel the Israeli ambassador in Amman,” the statement read.

The move to counter the latest Israeli measures has yet to garner an official response from Jordanian officials.

“[The measures] contradict the most basic human rights values and international laws,” the statement read.

The committee warned that such actions “represent a new and dangerous stage that provokes millions of Muslims around the world” and entrenches “racial and sectarian divides … and incites hate speech”.

Al-Rahma gate leads to a building that was sealed off by Israel in 2003 after it accused the Islamic Heritage Committee, which was headquartered there, of conducting political activities, Maan reported.

On Tuesday, Israeli forces reopened a gate, located on the east side of the Al-Aqsa Mosque compound.

The Jordanian MPs’ statement acknowledged “royal efforts” that led to the removal of the chains.

According to local media reports, Palestinians performed their prayers outside the gate to pressure Israeli police into reopening the gate.

In videos circulated in local media, Israeli police were seen beating and physically assaulting Palestinian worshippers as they attempted to enter the site.

Jews believe the compound is where the Biblical Jewish temples once stood, but Jewish law and the Israeli Rabbinate forbid Jews from entering the compound and praying there, as it is considered too holy to tread upon.

The compound’s Western Wall, known as the Wailing Wall to Jews, is believed to be the last remnant of the Second Temple, while Muslims refer to it as al-Buraq Wall and believe it is where the Prophet tethered al-Buraq, the animal upon which he ascended to the sky and spoke to God.

Israel occupied East Jerusalem during the 1967 Six Day War. It later annexed the city in 1980, claiming it as the capital of the self-proclaimed Jewish state in a move never recognised by the international community.

While Jewish visitation is permitted in the compound, non-Muslim worship is prohibited according to an agreement signed between Israel and the Jordanian government.

However, Israeli authorities regularly disrupt the status quo and allow Jewish visitors to enter the site, often under armed guard, while restricting access to Palestinians.