The jury in the blackmail trial of journalist Steve Barrett has been discharged after they were unable to reach a verdict.

Barrett, 63, who formerly worked for Nine’s 60 Minutes and the Seven Network, faced trial in the NSW Supreme Court accused of attempting to extort money from the masterminds of the Plutus Payroll tax fraud syndicate. 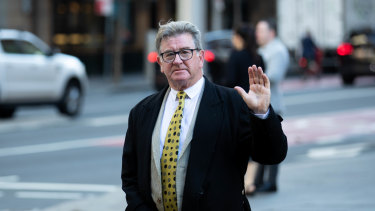 Journalist Steve Barrett arrives at the Supreme Court during his trial.Credit:Janie Barrett

He pleaded not guilty to one count of making an unwarranted demand with menaces with the intention of obtaining a gain.

Prosecutors alleged he was involved in a plot with two others to demand $5 million from the architects of the Plutus Payroll tax fraud scheme by threatening to expose them in the media. Barrett was allegedly given cash payments to put pressure on the fraudsters.

He denied this, telling the court he was chasing “a bloody good story” and had been in talks with a producer at A Current Affair. He said his plan was to get proof and documents to back up the story so he wouldn’t be sued for defamation.

On Wednesday, a jury of six men and five women were discharged after they were unable to reach a unanimous or majority verdict. They had deliberated for nine days.

The forewoman was discharged after deliberations began, when she sent a note reading: “I cannot come into the courtroom with the other jurors, I am scared to be in the room. Please discharge me, sorry.”

Justice Peter Johnson exhorted the remaining jurors to “continue a rational and tolerant process of listening to each other’s views”.

Mr Barrett’s barrister, Clive Steirn, SC, asked on Wednesday for the jury to get one further direction to continue deliberating, because a retrial would take a toll on Mr Barrett “on a personal level, and on his finances”. However, the jury confirmed several hours later that they “cannot see a possibility” of reaching a verdict.

According to agreed facts in the case, the tax fraud scheme involved a group of people purporting to use a company, Plutus Payroll, to provide legitimate payroll services when in reality it was “a façade to disguise their criminal conduct”.

The fraud involved unaware companies paying money to Plutus, with the expectation it would pay employee wages, superannuation, Pay As You Go (PAYG) tax withholding and Goods and Services Tax (GST).

However, a “significant proportion” of the PAYG and GST was not paid to the tax office and was instead “misappropriated for the personal betterment” of the fraudsters.

This was done by using a number of second-tier companies to handle the funds, which had “straw directors” appointed by the fraudsters – directors in name only who had no actual control over the business.

According to the agreed facts, the two primary conspirators in the blackmail – Daniel Hausman and Daniel Rostankovski – began to plan in late 2016 and engaged a lawyer in December of that year to help them deal with their anticipated windfall.

The Plutus conspirators agreed to pay after a meeting at an office at Martin Place in February 2017, which was attended by Mr Barrett and secretly recorded by the AFP. The amount of $4.82 million was later paid into a law firm trust account.

In a recording of that meeting, Mr Barrett said he had been a journalist for 39 years and was interested in investigating the “very serious story” of Plutus. He left the room before any money was demanded.

Mr Steirn argued Mr Barrett was manipulated by the blackmailers who intended to use his journalistic credentials for their own ends. The barrister said the $5 million was not shared with Mr Barrett and was split 50-50 between Mr Hausman and Mr Rostankovski.

Legendary broadcaster Ray Martin told the trial that Mr Barrett – known by the nickname Bar Rat – was a “very good journalist” who is “ethical, accurate and highly-respected by his colleagues”. The court heard Mr Barrett told multiple people, including Mr Martin, that he was investigating a fraud.

The case will return to court for mention on June 4.