Fruit juice health star ratings are set to plummet after a ministerial vote rejected a final attempt to ensure it is given a higher score than diet soft drink.

A majority of members of The Australian and New Zealand Ministerial Forum on Food Regulation cast their votes on Friday to maintain an earlier decision to rate 100 per cent juice according to sugar content, and not give it extra points simply for being juice. 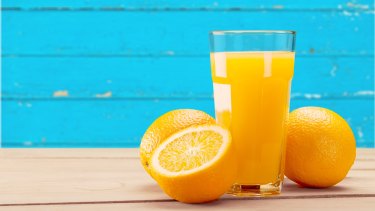 Orange juice with a high sugar content equivalent to other soft drinks will have a similarly low health star rating.

The final decision follows two previous attempts by the Commonwealth to give fruit juice special treatment under the system, which prior to the current overhaul had rated all 100 per cent fruit juices five stars. Each state and territory has a vote, as do the Commonwealth and NZ representatives on the forum.

The decision means that some fruit juices with a high sugar content will now score as low as 2.5 stars, which is below diet soft drinks like Diet Coke – although juices with less sugar may still score as high as four stars.

While other ministers refused to comment, federal Agriculture Minister David Littleproud called the decision “madness” in a statement following the meeting.

“How can anyone believe that the health star rating for drinks with no nutritional value should be higher than 100 per cent fruit and vegetable juices?”

But health leaders and advocates have welcomed the decision as a victory for public health and consumers.

Alexandra Jones, research fellow in food policy and law at the George Institute for Global Health, said the decision “reflects the science that juices aren’t healthy” and is “a huge win for public health”.

Dr Jones said the claim that all juice will now score below drinks like Diet Coke is false. Rather, “what will happen now is the best juices will score four, and they’ll be scaled down from there”.

An independent review found that water is the only drink that should score five stars, she said.

Matthew Hopcraft, CEO of the Australian Dental Association’s Victoria branch, said there is “more work to be done” to improve the health star rating system, “and we agree with Minister Littleproud that diet soft drinks should not receive a high health star rating.

“But it is also important to recognise that we have significant public health problems in Australia, with tooth decay and obesity affecting too many of our young children, and public health solutions are necessary to help fix these problems.”

Minister Littleproud said the rating reduction would impact demand for juice and have flow-on effects to farmers.

“States and territories who supported this including Queensland, Northern Territory, ACT and Victoria have let down our farmers, consumers, and Australia’s $800 million juice industry.

“They have made a mockery of the rating system and have ignored Australian Government and industry concerns,” Mr Littleproud said.