Award-winning author Kate Clanchy who was cancelled on social media amid claims her critically-acclaimed book peddled racism has found a new publisher after she was dropped by another following deep controversy.

Kate Clanchy, 57, a mother-of-three and former teacher from Glasgow, faced criticism for her Orwell Prize-winning memoir ‘Some Kids I Taught and What They Taught Me’ and was pushed to the brink of suicide by the row.

Fellow authors and her own pupils praised the book, but some readers said it promoted racial stereotypes which led to Picador, an imprint of Pan Macmillan which had been Clanchy’s publisher for 20 years, cutting ties with her.

Picador had initially said the book would be updated, before deciding to stop distribution and return the rights to her. However, independent publisher Swift Press, which was only set up in June 2020, has now bought the rights.

Swift Press approached Clanchy and it has now put out a reissued version of the 2019 book, which is about her teaching experiences, removing the words and phrases which had caused such upset among some readers.

She was accused of promoting racial stereotypes with the phrases ‘almond-shaped eyes’ and ‘chocolate-coloured skin’ – and said a student was ‘so small and square and Afghan with his big nose and premature moustache’.

Concerns were also raised over the description of two autistic students as ‘jarring company’ – but the new book does not contain any of these phrases. Another publisher has also now approached her to publish her poetry.

The updated version of Some Kids also contains a new afterword written by Clanchy, who was awarded an MBE in February 2019, in which the author insists that she still thinks ‘that my beleaguered, faulty text is worth reading’. 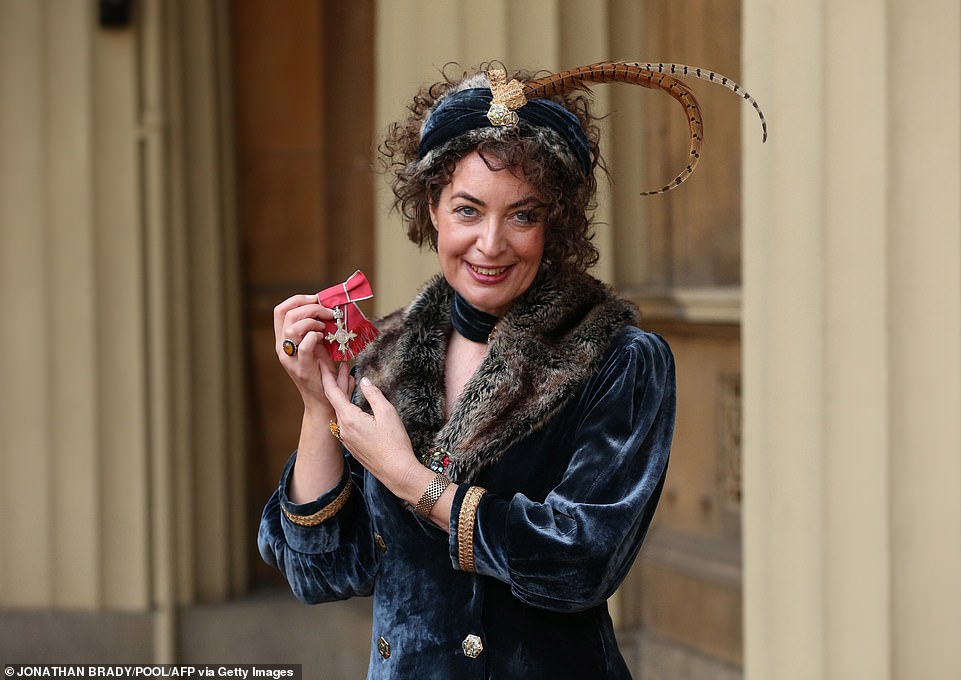 Scottish author Kate Clanchy poses with her medal after being appointed an MBE at Buckingham Palace on February 7, 2019 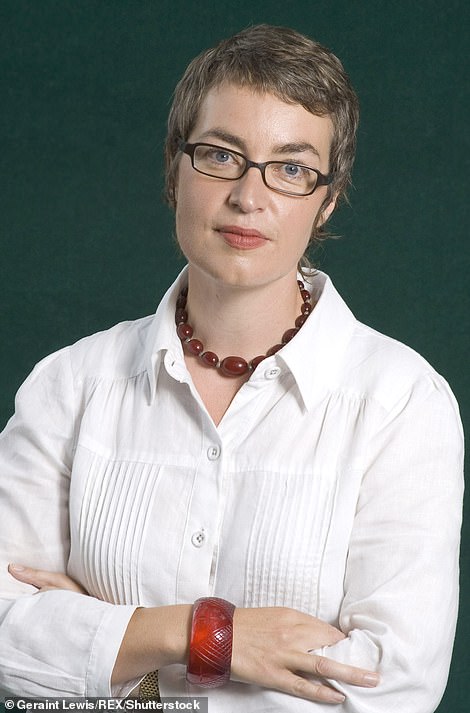 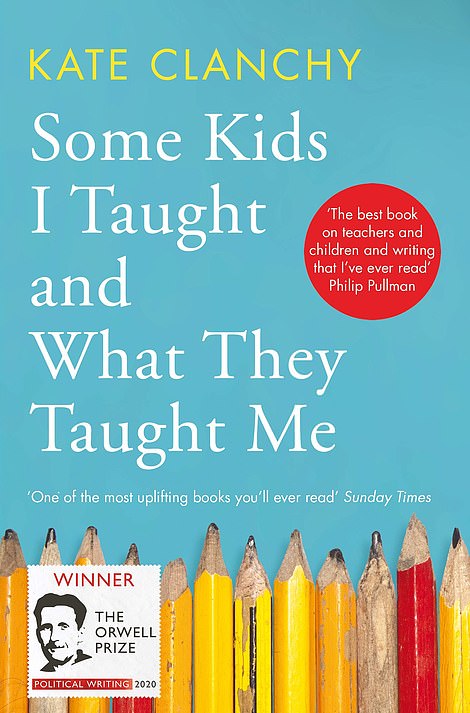 Clanchy told the Guardian: ‘I was pleased to have been approached by Swift Press, and that they will allow my work to remain available to readers, who will be able to judge it for themselves.

‘I was glad to re-engage with the text – it is a privilege for any writer – and I have listened to and benefitted from other people’s readings. The storm focused on particular words and phrases which I have been happy to change.’

Swift Press said Clanchy ‘writes about her students with deep affection, and it is clear that she wants them to do as well as they possibly can’ and cited pupils who had praised her ‘unequivocal care and support’ for them.

The London-based publisher added that she ‘writes with an often self-lacerating honesty, and in a way that explicitly shows her moving from positions of ignorance – or even prejudice – to ones of understanding’.

The author, who now lives in Oxfordshire, has previously claimed that Picador failed in its duty of care to her – and that instead of protecting her, the publisher tried to erase her work from existence in a public whitewashing.

Clanchy, an Oxford graduate who was a teacher for 35 years, also said she was to suicide when she was copied into an email from a senior Picador employee that seemed to show it was trying to wash its hands of her.

She said the feeling to take her own life ‘was very strong’, telling The Times: ‘I’m a mentally healthy person. I’m very resilient. I’m a teacher. But I was amazed by the strength of the ideation.’

It came as she had already lost both her parents just days apart to Covid-19 that year and was faced with the breakup of her marriage.

Picador announced last week it would no longer work with Clanchy and would stop distributing all eight of her books with the publisher, meaning the works were no longer for sale in bookshops or even as ebooks.

Clanchy claimed some of the offending references were taken out of context but later apologised and said she would rewrite the book, telling the Times: ‘I apologise many, many times over. I am sorry.’

However she has denied the claims of racism and doubled down, saying her book was ‘anti-racist’. But her publisher Picador was itself accused of not going far enough in its initial statement on the row.

It later issued two apologies and said it was discussing the best way to update future editions of the book.

A number of Twitter users criticised Clanchy over the prize-winning book, with some even saying it had ‘triggered’ them 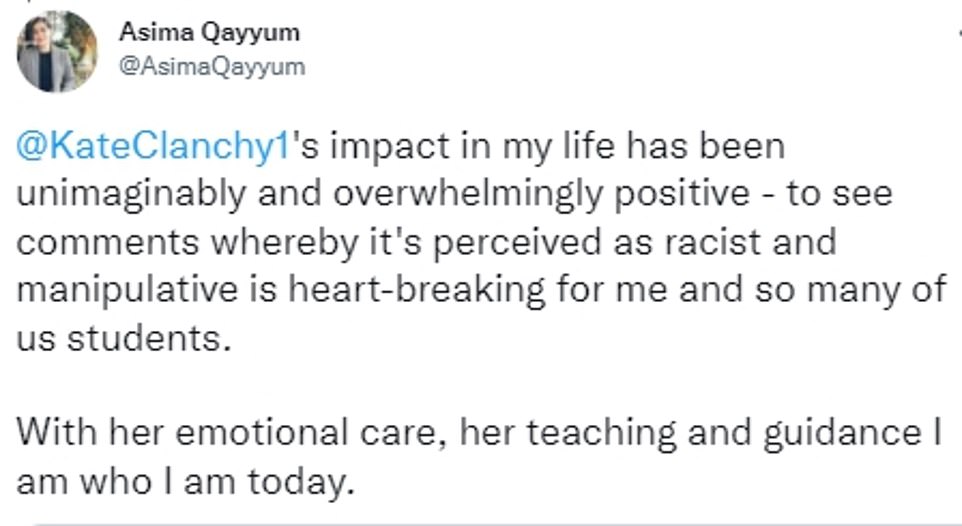 One pupil, Asima Qayyum, defended Clanchy and said her impact on her life was ‘unimaginably and overwhelmingly positive’ 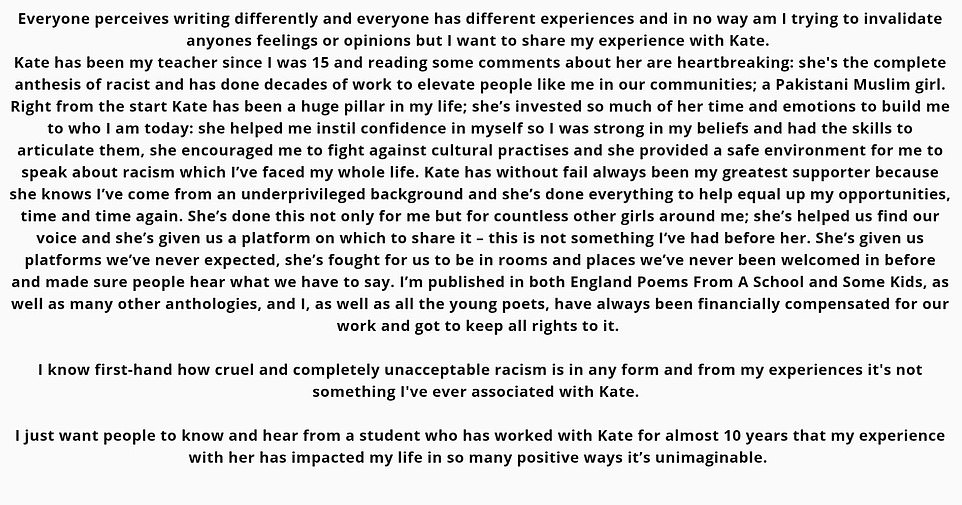 It said it apologised ‘profoundly for the hurt we have caused, the emotional anguish experienced by many of you who took the time to engage with the text, and to hold us to account.’ 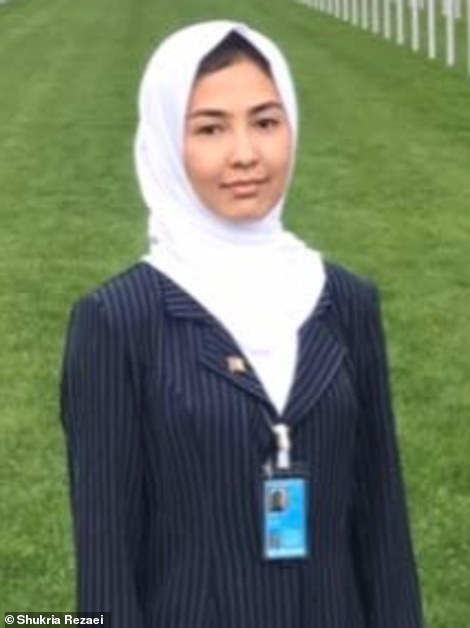 Her former pupils have spoken out in support, with Shukria Rezaei identifying herself as the ‘girl with the almond eyes’

After those trying to cancel her book faced backlash from other people trying to support the author, the publisher added: ‘We vigorously condemn the despicable online bullying of many of those who have spoken out. This has no place in our community.’

The author has also hit back at the cancel culture mob – and said the controversial phrases were not racist but derived from how the children described themselves.

The supposedly racist passages were shared on Twitter but many authors jumped to her defence. Leading novelist Philip Pullman said her book was as ‘humane, warm, decent, generous and welcoming’.

Meanwhile, one of her former pupils, Shukria Rezaei, identified herself as the ‘girl with the almond eyes’ in The Times. She wrote: ‘Critics labelled [Kate’s] description patronising, insulting, offensive, colonialist and racist. This upset me… I did not find it offensive.’

Twitter users had slammed Clanchy over the writing online. One wrote: ‘This has horrified and triggered me. This book is full of racism and ableism.

‘Privileged people always hail teachers like this, while disabled people and people of colour have their lives seriously damaged by them. Look at all the privileged jumping to her defence too!’

Another said: ‘Just caught up on the racist tropes in Kate Clanchy’s writing. Read extracts, the kind of crude, blunt historical racism that lives on in white discourse.’