Keep the lights on, Boris! Pubs plan Friday and Saturday night ‘SOS’ protests against 10pm curfew and warn that thousands of businesses could go bust before Christmas if it stays in place

Pub landlords are to protest against Boris Johnson’s 10pm curfew this weekend as he and his ministers come under increasing pressure to explain how it is helping the fight against coronavirus.

Venues across the country are being urged to flash their lights in an ‘SOS’ Morse Code pattern in the minutes after the enforced shutdown tomorrow and Saturday to demonstrate their fury.

The campaign comes as Labour leader Keir Starmer ruled out opposing the curfew in a commons vote next Tuesday. The vote would have allowed rebel MPs to throw out the measure and force ministers into a rethink.

Those behind the campaign want to see a return to staggered kicking out times instead of a blanket 10pm closure that has seen crowds hit the streets and public transport en-masse in towns and cities.

It is being supported by the Campaign for Real Ale, the Night Time Industry Association (NTIA) and the Oakman Inns group which runs pubs across England.

‘Every single business I have spoken to, every single trade association, they will do what is necessary to make their premises Covid secure,’ she said.

‘They are really going above and beyond to make the places Covid secure. But this one measure, a 10pm curfew, sticks out like a sore thumb because there is just no evidence that the curfew itself is going to help in any way.’

It came as Boris Johnson faced fury from Northerners and a massing Tory revolt after it emerged he will plunge 10million people in Covid hotspots into even tougher lockdown restrictions next week, shutting pubs and restaurants completely. 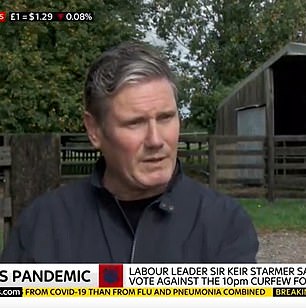 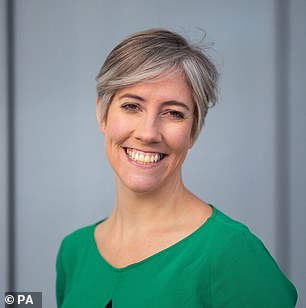 Labour leader Keir Starmer ruled out opposing the curfew in a commons vote next Tuesday. But Lib Dem daisy Cooper said: ‘It seems absolutely crazy we are kicking people out onto the streets into big groups’ 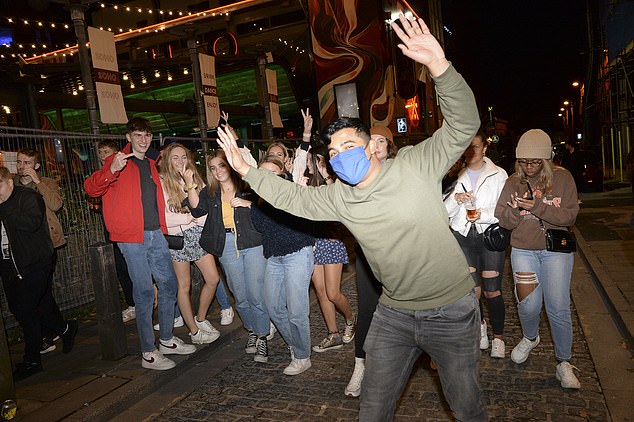 How pubs can support the campaign

When the 10pm curfew comes on Friday and Saturday, observe the rules and get your customers out.

Switch off your venue’s lights as normal.

Get your smartphone video camera ready.

Flash your venue’s lights on and off in the SOS pattern: dot-dot-dot dash-dash-dash dot-dot-dot

The PM has signed off a new ‘traffic light’ system of curbs for England after days of bitter wrangling between ministers and scientists, with a swathe of the country where infections have been surging facing the harshest Tier Three level.

The mechanism for classifying ‘red’ zones are still unclear, but they are expected to cover Manchester, Liverpool and Newcastle – three cities that have continued to see infection rises despite local lockdowns.

Hospitality businesses are set to be shut under the new measures, likely to be confirmed Monday and imposed from Wednesday, but shops, offices and schools will stay open.

Communities secretary Robert Jenrick today floundered when asked ot provide evidence that the curfew was working. Appearing on LBC radio he said: ‘Well it’s common sensical that with a virus that transmits through human interaction, the longer that you spend time with people indoors and the more interaction you have with people, the faster the virus will pass to other people.

‘So that was the thinking behind it, we obviously took advice from our scientific and medical advisors and they agreed with that common sense approach.’

When pressed on the evidence underpinning it he added: ‘There is evidence but we can’t wait for the most detailed epidemiological evidence to be prepared.’

Ms Cooper said: Where you have got higher rates of coronavirus lots of MPs are really worried about seeing groups of people out on the streets and crammed in public transport.

‘In other parts of the country where they have got almost no cases at all they are very worried about the mental health impact of closing down some of the venues that are often the only source of social interaction. It is doing damage in different ways in different places.’

Camra chief executive Tom Stainer added: ‘Curfews have been imposed by governments across these islands without proper explanation or evidence, leading to fears that pubs have become the scapegoat for the pandemic.

‘Publicans have already invested thousands of pounds of their dwindling reserves making their premises COVID-secure and are willing to do whatever is necessary to provide safe places for communities to meet and responsibly enjoy the wellbeing benefits of having a pint with friends and family.’

‘To add insult to injury, no financial help has been offered to compensate for the knocked consumer confidence and reduced trade that the curfews have brought about.

‘If ministers don’t provide this financial support quickly pubs and breweries just won’t be able to keep the lights on, risking thousands closing down for good by Christmas.’

Sir Keir confirmed this afternoon that his party would not go against the move because if it was voted down next week it would leave no restrictions in place at all.

However, he continued to insist that the plan must be updated because it was not helping the fight against coronavirus cases increasing across Britain.

Speaking to Sky News in Wiltshire, Mr Starmer said: ‘There is a vote next week, the problem with the vote next week is that it is an up-down, take-it-or-leave-it vote and therefore if you vote down the current arrangements there won’t be any restrictions in place.

‘That is not what we want so we won’t be voting down the restrictions in place.

‘But we do say to the government: reform the 10pm curfew, show us the evidence, do it in a much smarter way.’

Peter Borg-Neal, the chairman of Oakman Inns, said: ‘The financial impact of this curfew is already huge and the job losses will be dramatic.

‘However, my greatest concern regarding the curfew is the impact on public health. Hospitality reopened for business on July 4 and for the next nine weeks there was no significant increases in Covid transmissions despite many claiming that it was inevitable.

‘In Oakman Inns we have served 1.5 million customers and we have absolutely no evidence that anyone has contracted the virus on any of our premises. The vast majority of other hospitality operators have also worked hard to create Covid-secure environments and their success is evident for all to see.’