Kenny Rogers – the raspy charmer whose life was a country ballad

The raspy-voiced charmer whose whole life was a crazy country ballad: How Kenny Rogers was one of eight children, had an alcoholic carpenter dad and five wives ending in a waitress called Wanda

In many ways the life of country superstar Kenny Rogers resembled his schmaltzy ballads.

One of eight children born to an alcoholic Texan carpenter and a strict Baptist mother, he knew sad times and bad times, but rose above it all to find fame, fortune and happiness with a former waitress called Wanda.

His death at 81, announced yesterday by his family, robs America of one of its favourite musical sons. 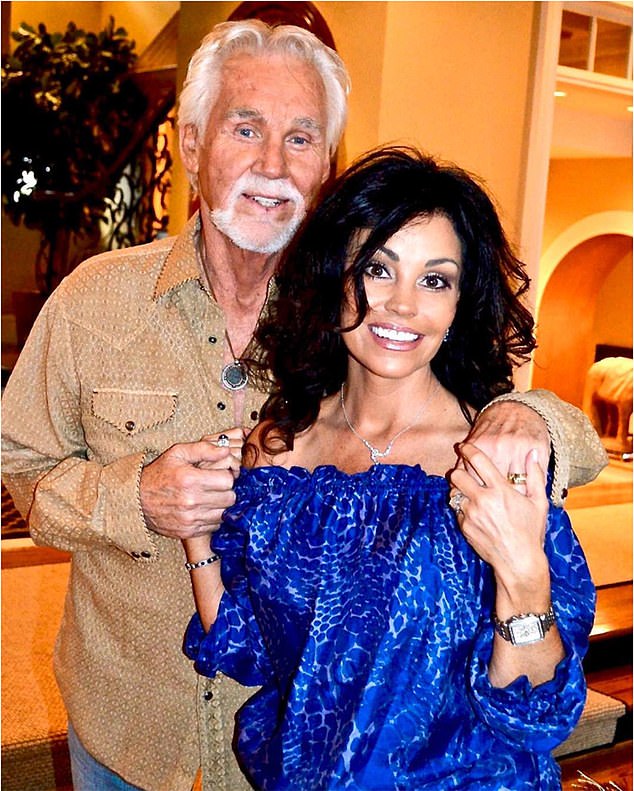 Kenny Rogers knew sad times and bad times, but rose above it all to find fame, fortune and happiness with a former waitress called Wanda (pictured together)

Songs such as The Gambler, Lucille, Coward Of The County and Ruby, Don’t Take Your Love To Town, all delivered with his familiar honeyed rasp, made him one of the biggest-selling country artists in the world.

Surrounded by his family, including fifth wife Wanda, the father-of-five died peacefully on Friday night of natural causes at his home in Georgia.

In a statement, his family said he ‘left an indelible mark on the history of American music’.

He topped pop and country charts during the 1970s and 1980s and won three Grammy awards.

Close friend Dolly Parton, who he duetted with on the 1980s hit Islands In The Stream, said tearfully: ‘You never know how much you love somebody until they’re gone. I’ve had so many wonderful years and wonderful times with my friend Kenny, but above all, the music and the success, I loved him as a wonderful man and a true friend.’ 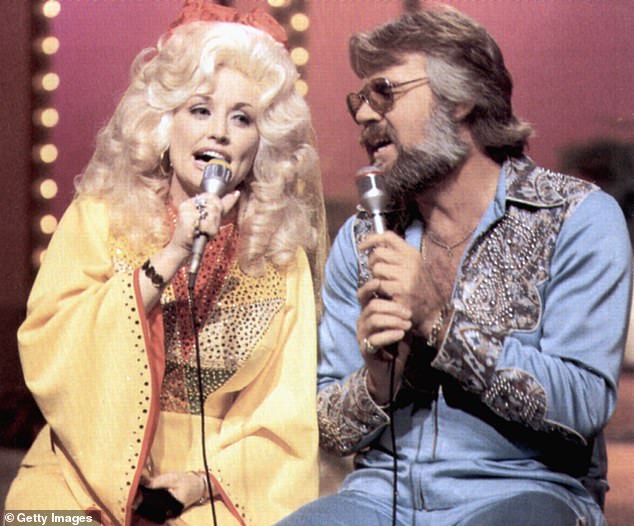 The singer sold millions of records with other singers, most memorably with Dolly Parton on Islands in the Stream

An early foray into music included singing with psychedelic rock band The First Edition in the late 1960s. He launched his solo career in 1976 and became one of the most successful pop-country crossover acts of all time, though he was not a favourite of the critics.

In 2007 he unexpectedly found himself back in the limelight in the UK when The Gambler became the unofficial World Cup anthem of England’s Rugby Team.

The song became so popular that during his 2013 Glastonbury Festival appearance, Rogers played it twice. 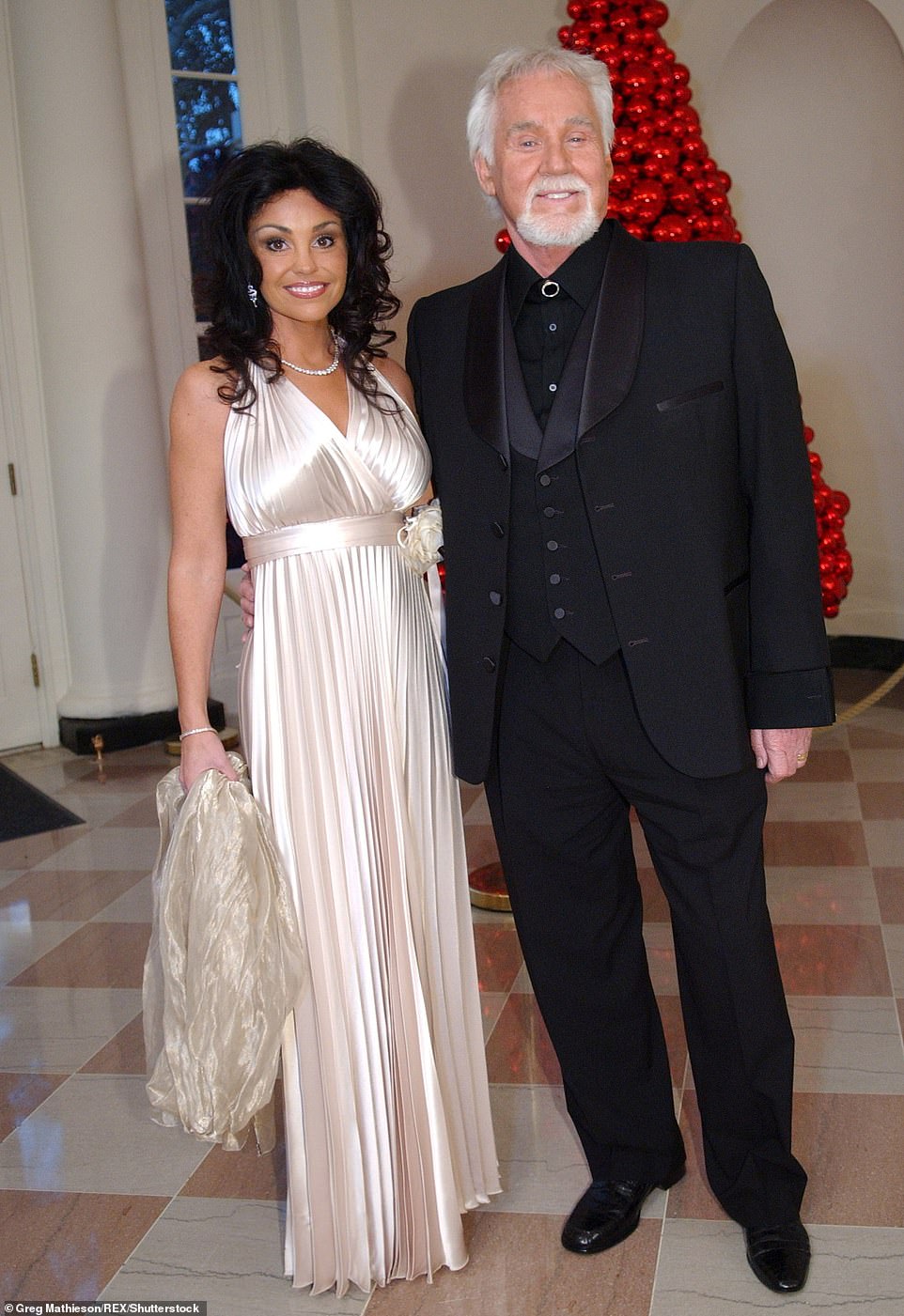 Loving: Kenny with his wife Wanda at Presidential Reception for Honorees of the 29th Kennedy Center Honors at the White House in December in 2006

To his fans, Rogers oozed Southern charm and seemed as wholesome as apple pie, but as he told Wanda, 28 years his junior, when he sang his vows to her during their wedding ceremony in 1997: ‘I’ll give you the future, if you’ll forgive me my past.’

There was a fair bit to forgive.

An inveterate ladies’ man – though he always denied persistent rumours of a fling with Parton – he faced sleaze allegations four years earlier that severely dented his nice guy image.

He was accused of having a toll-free, personal phone ‘loveline’ on which he asked women to leave obscene messages or listen to his explicit fantasies. 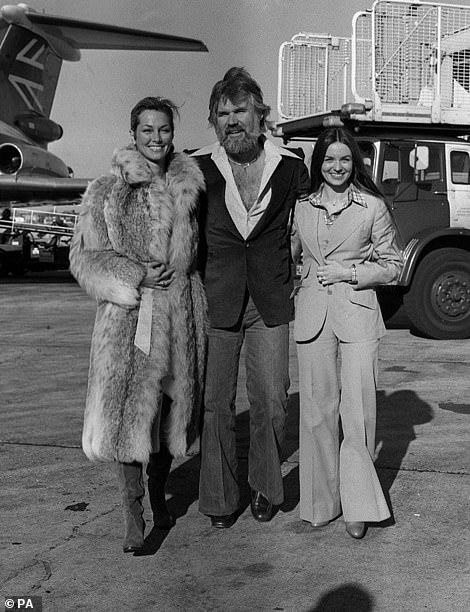 ‘It was personally devastating, devastating to me,’ he said later, conceding that it was ‘not a completely fabricated’ situation.

He added: ‘I was going through a serious mid-life crisis. I was looking for excitement, I guess, I wanted to play and I thought I was playing with people I could trust.’

It left a ‘cloud of guilt’ hanging over him, but he said: ‘Still, what can you say? Life is a crapshoot and anything that doesn’t kill ya, is an experience.’

Evidently, fifth wife Wanda did forgive him and remained with him to the end. They met when she was working at an Atlanta restaurant in 1991 and quickly fell in love, though Rogers had to win over her disapproving parents. 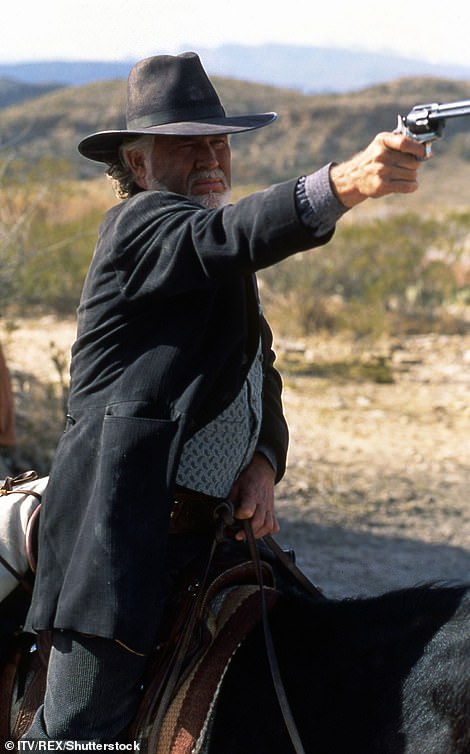 Film star: Kenny sold tens of millions of albums, won three Grammys and was the star of TV movies based on The Gambler and other songs, earning him super stardom in the 70s and 80s (pictured in the film)

Rogers said: ‘I told them, “I am a good person. Given the choice I will do right over wrong most of the time.”‘

He also once said that his first thought in the morning was: ‘What can I do to make Wanda’s life better?’

Of Irish and Native American ancestry, Rogers was raised on a tough housing estate in Houston by his alcoholic carpenter father and his mother, a nursing assistant.

But he propelled himself out of humble beginnings through sheer hard work. He sold millions of records with other singers, most memorably Parton.

The two were paired at the suggestion of the Bee Gees’ Barry Gibb, who wrote Islands In The Stream.

‘Barry was producing an album on me and he gave me this song,’ Rogers said in 2017. 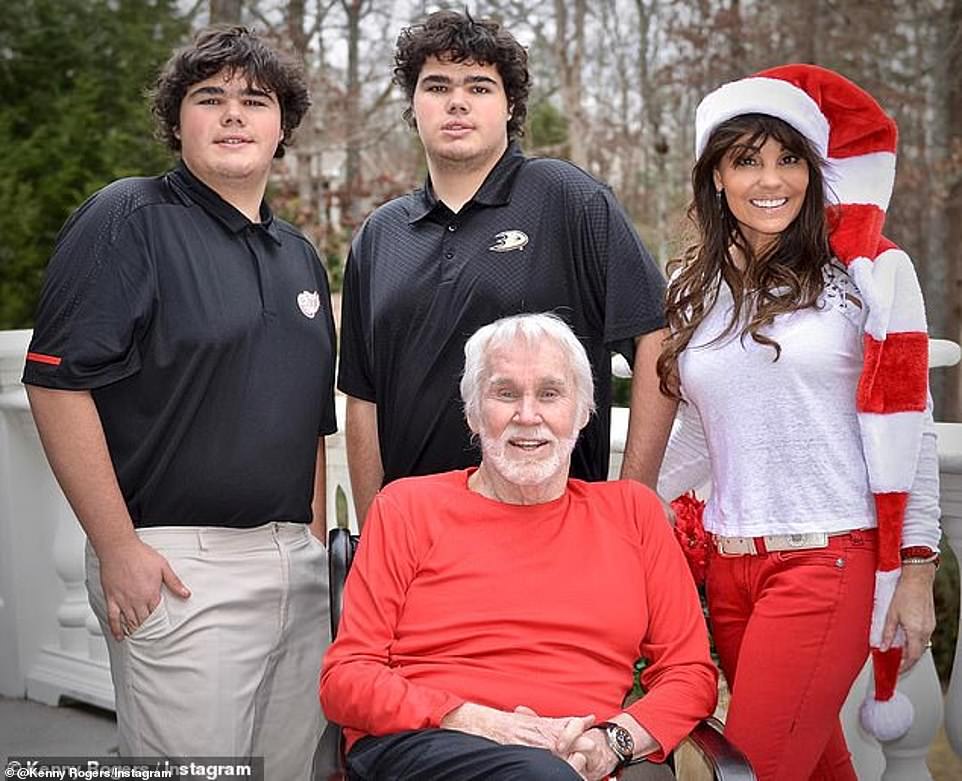 The singer and his wife Wanda Miller, 52, are parents to 14-year-old identical twin sons, Jordan and Justin

‘I learned it and went into the studio and sang it for four days. And I finally looked at him and said, “Barry, I don’t even like this song any more.” And he said, “You know what we need? We need Dolly Parton.” I thought, “Man, that guy is a visionary”.’

Rogers was also a businessman with ventures in property and the restaurant sector and he acted in several films and TV shows, including starring as a racing driver in the 1982 film Six Pack.

In a biography, Rogers was described as a ‘benevolent dictator’. The singer later said that was ‘absolutely right’, adding: ‘I need to make the decisions, but whatever decision I make will be the best.’

His determination to succeed, he once insisted, did not stem from his unhappy childhood.

‘My father had a great sense of humour. Even when he was drunk, he made us all laugh,’ he said.

‘It’s not like I said, “I am tired of this wife, I’m gonna get rid of her.” I am a seeker of happiness. I believe I will be happily married to Wanda for the rest of my life.’