A KILLER vaping-related lung disease has finally been given a name – as the death toll hits 31.

The Center for Disease Control and Prevention (CDC) referred to the illness as 'EVALI' in its weekly report on the number of deaths and cases. 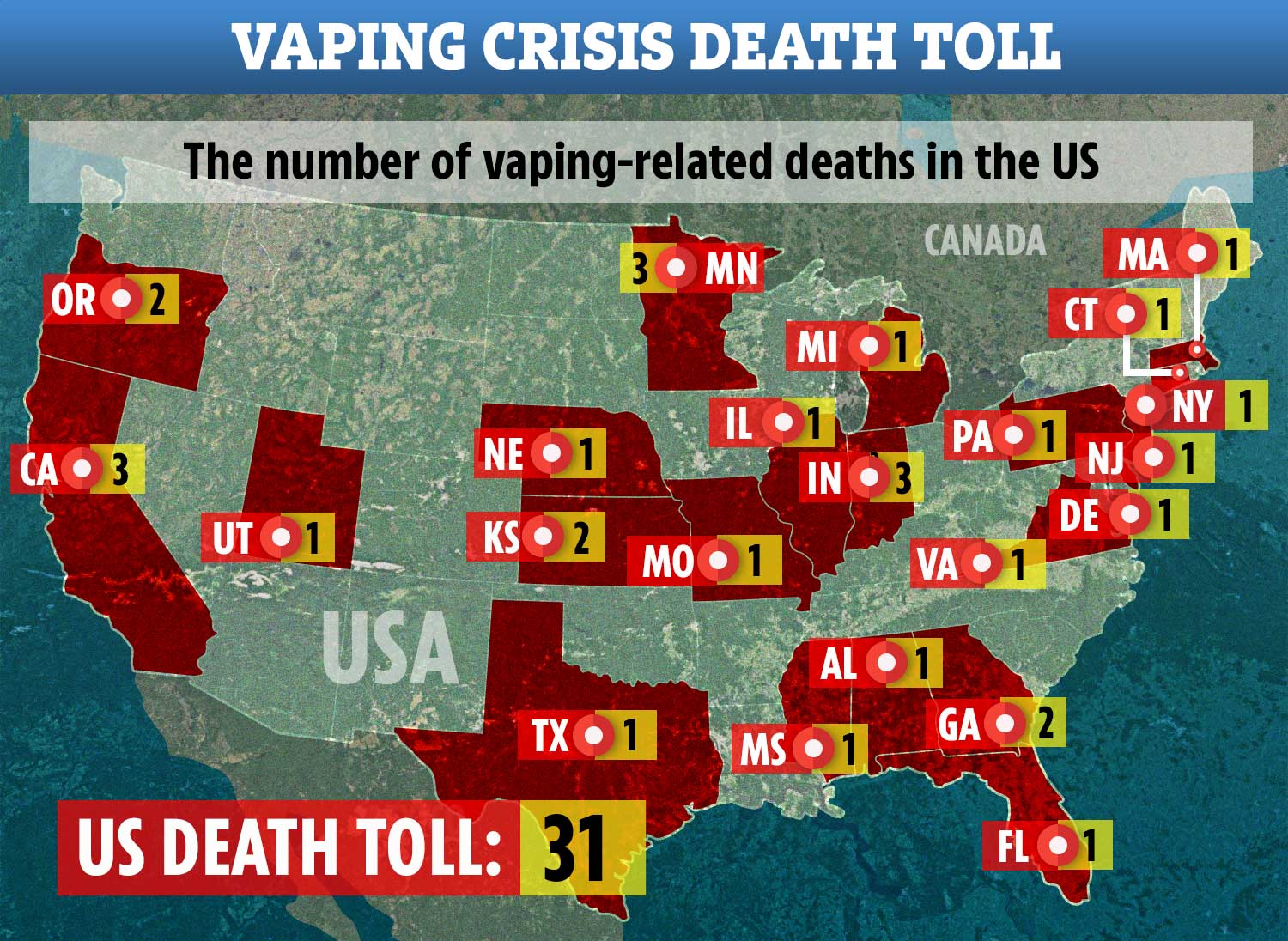 But experts say they still don't know what causes EVALI, which stands for “e-cigarette or vaping product use-associated lung injury.”

It comes as Minnesota's health department confirmed two more people had died from the disease, taking the state's death toll to three.

More than 1,299 people have now fallen ill after using vaping products, according to the CDC's latest figures.

The federal agency is due to release updated figures later today.

US health officials said last Friday there may be more than one cause behind the nationwide outbreak.

Investigators have pointed to vaping oils containing THC, the psychoactive ingredient in cannabis, as being especially risky, but have not yet tied the cases to any specific product or compound.

Dr Anne Schuchat, principal deputy director of the CDC, said: "I think there will be multiple causes and potentially more than one root cause."

She added that the source of the illness in one part of the country may not be the same as in another part.

Doctors have been issued updated guidance, urging them to be especially watchful of patients who may have both a vaping lung injury and an unrelated respiratory infection.

The CDC had previously advised doctors to rule out infections before considering vaping injuries, but that was during the summer months, when there are fewer cases of respiratory infections such as flu.

They are now telling doctors to devise treatments that would address both conditions.

Dr Schuchat said a handful of vaping patients who recovered and were discharged were later readmitted to the hospital, but it was not clear whether these individuals resumed vaping and incurred a new injury.

How safe are e-cigarettes in the UK?

In the UK, e-cigarettes are tightly regulated for safety and quality.

They're not completely risk free, but they carry a small fraction of the risk of cigarettes.

E-cigarettes do not produce tar or carbon monoxide, two of the most harmful elements in tobacco smoke.

The liquid and vapour contain some potentially harmful chemicals also found in cigarette smoke, but at much lower levels.

While nicotine is the addictive substance in cigarettes, it's relatively harmless.

Almost all of the harm from smoking comes from the thousands of other chemicals in tobacco smoke, many of which are toxic.

Nicotine replacement therapy has been widely used for many years to help people stop smoking and is a safe treatment.

There's no evidence so far that vaping causes harm to other people around you.

This is in contrast to secondhand smoke from smoking, which is known to be very harmful to health.

The new guidelines urge doctors to follow up with patients a week after discharge, and to begin vaping cessation treatments or therapies for THC and nicotine before patients leave the hospital.

Dr Ned Sharpless, acting commissioner of the US Food and Drug Administration (FDA), said the agency has begun testing on more than 700 product samples and product parts gathered from patients and health officials.

FDA scientists are testing for a broad range of chemicals, including nicotine, THC and other marijuana components, metals, cutting agents and other additives, pesticides and toxins.

Dr Sharpless said: "Based on our testing of samples to date, there does not appear to be one product or substance involved in all of the cases. It may be there is more than one cause to this outbreak.

"We do know that THC is present in most of the samples tested to date."

Mitch Zeller, director of FDA's Center for Tobacco Products, said the agency has evaluated 225 THC-containing products and found Vitamin E acetate – a cutting agent – in nearly half of them.

Dr Sharpless said the FDA is collaborating with customs and border control agents to intercept any products containing illicit substances.

"If we determine that someone is manufacturing or distributing illicit, adulterated vaping products that cause illness or death for personal profit, we would consider that to be a criminal act," he said.

The CDC and the FDA continue to urge people to stop vaping, especially products containing THC.

State's that have so far reported vaping-related deaths