Labour's dilemma: a shadow of anti-Semitism cast over Corbyn London: UK Labour leader Jeremy Corbyn has claimed “no anti-Semitic remarks are ever done in my name”, at the end of a week that has seen his own MPs blame Corbyn supporters for racist abuse in a scalding parliamentary debate.

Labour’s – and Jeremy Corbyn’s – problem with anti-Semitism refuses to go away. Indeed, some in Labour fear it poses an existential threat to the party. 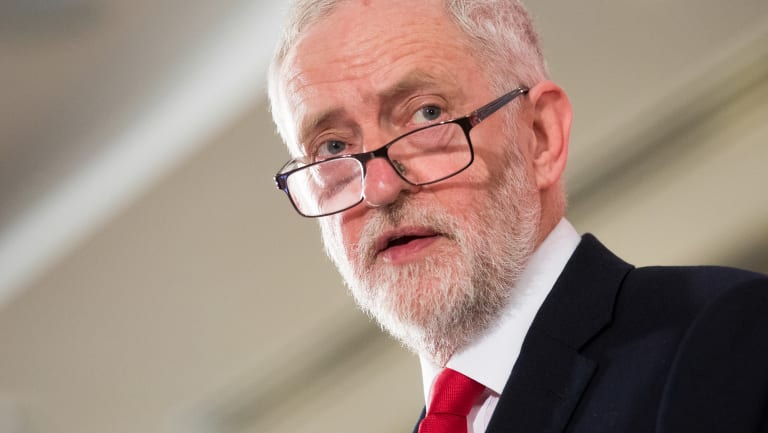 The recurring issue has added to dissatisfaction with Corbyn, whose reticence to blame Russia for the Sergei Skripal poisoning and to approve the bombing of Syria’s chemical weapons programme appealed to some in his pacifist, left-wing base but infuriated his critics.

Corbyn’s pacifism is a known factor: he washed his hands of the UK’s nuclear deterrent in last year’s election campaign and his party nevertheless did unexpectedly well.

Anti-Semitism, however, is a growing problem in the UK: Community Security Trust, a charity that protects British Jews, this year reported a 34 per cent increase in the number of violent anti-Semitic assaults – many of them against schoolchildren.

On Tuesday afternoon MPs gathered for a three-hour debate in the House of Commons on anti-Semitism.

The debate was called by the government, which clearly saw an opportunity to inflict political damage.

But Labour MPs did not hold back.

Liverpool Labour MP Luciana Berger said it was “not long ago when the left actively confronted anti-Semitism”. 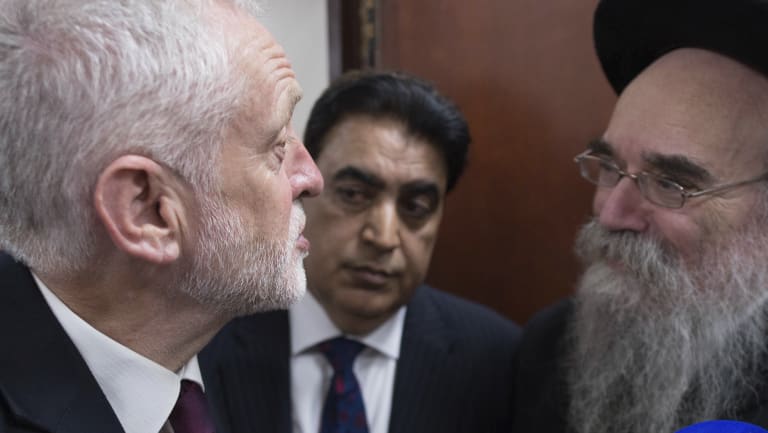 Nothing personal: Labour leader Jeremy Corbyn, left, meets locals at Finsbury Park Mosque in north London, after an incident where where a van struck pedestrians, in London, in June.

However in 2018 “anti-Semitism is now more commonplace, more conspicuous and more corrosive within the Labour party”, she said. Labour supporters using the hashtag JCforPM [Jeremy Corbyn for Prime Minister] had called for her de-selection because she spoke at a rally against anti-Semitism, she said.

“They have called me Judas, a Zionazi and an absolute parasite, and they have told me to get out of this country and go back to Israel… My party urgently needs to address this issue publicly and consistently, and we need to expel from our ranks those people who hold these views.”

Labour MP John Mann said Labour members who “stand in solidarity with our Jewish colleagues” were targeted by Momentum, a grassroots group within Labour that grew out of Jeremy Corbyn’s leadership campaign.

“There is explicit targeting of Jewish members of the parliamentary Labour party because they are Jewish. That is what is going on at the moment.”

Mann said his wife had been sent a dead bird in the post by a “Labour Marxist anti-Semite”, and she had been threatened with rape after he took part in an anti-Semitism rally.

“It is constant,” he said. “There is explicit anti-Semitism, and then there is the bigger group—the excusers of anti-Semitism, the people who say, ‘This is something to do with who the leader of the Labour party is and challenging him.’ No, it is not.” 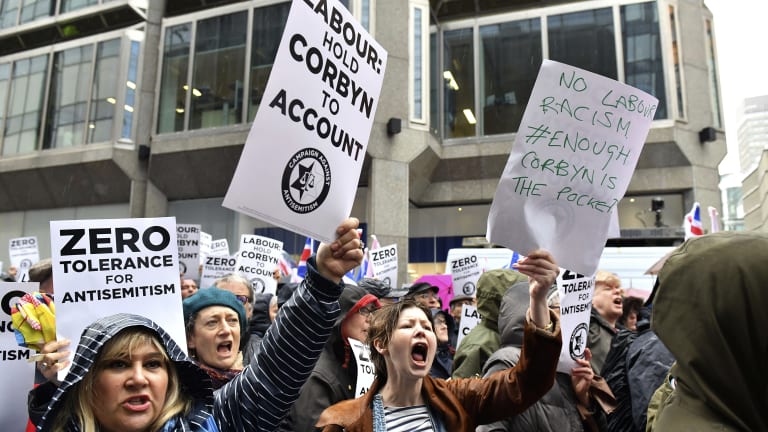 Protesters chant slogans during a demonstration organised by the Campaign Against Anti-Semitism against alleged prejudice in the Labour Party, amid a row over the party’s handling of claims of anti-Semitism.

Mann said young Jewish party members were scared to go to meetings with him, because they were “fearful that they will be intimidated and threatened.”

Labour MP Ruth Smeeth said she had “been the target of a campaign of abuse, attempted bullying and intimidation” from “within my own Labour family”.

She shared examples of the horrific abuse she received on social media, such as “#JC4PM Deselect Ruth Smeeth ASAP. Poke the pig—get all Zionist child killer scum out of Labour.”

And Dame Margaret Hodge said “it feels as if my party has given permission for anti-Semitism to go unchallenged”.

The next day Corbyn called Prime Minister Theresa May “callous” in parliament and had the debate thrown back at him.

“I will not take an accusation of callous from a man who allows anti-Semitism to run rife in his own party,” May said.

Corbyn’s problem is more than silence or inaction. The debate was called in March after it emerged that in 2012 he had criticised the decision to remove a mural on a London wall that his spokesman later acknowledged had contained anti-Semitic imagery.

Corbyn was also previously criticised for his membership of a private pro-Palestine Facebook group which regularly featured anti-Semitic material, which he claimed not to have seen.

An investigation into allegations of anti-Semitism within Labour by human rights lawyer Shami Chakrabarti in 2016 was called a “whitewash”, and she then accepted a peerage from Corbyn and entered the shadow cabinet.

Corbyn Tweeted that the MPs who took part in this week's debate “remind us of the urgent need to eradicate anti-Semitism from politics and society”.

“There is no excuse for abuse of any kind,’ he said.

On Thursday Corbyn told the Press Association “No anti-Semitic remarks are ever done in my name. I am totally opposed to it in any form whatsoever.

Corbyn has insisted he is a “militant opponent of anti-Semitism”.

However many of the attacks against Jewish politicians originate from pro-Corbyn groups.

On Wednesday London’s Labour Mayor Sadiq Khan challenged Jeremy Corbyn to “walk the walk” on tackling anti-Semitism within the party. He said the party should have acted much quicker on “glaringly obvious” cases such as his predecessor Ken Livingstone, who has claimed Zionists collaborated with Hitler.

“A number of Londoners of Jewish faith I spoke to are finding it very difficult because they genuinely believe the Labour party is not for them,” Khan told the Guardian. “Why? Because they’re Jewish and there’s a perception that the Labour party has not dealt with the problems of anti-Semitism. You can’t escape the fact they genuinely believe that.”

A senior Labour insider, who did not want to have her quotes attributed to her, said the rise in anti-Semitism was linked to Corbyn’s leadership because he has attracted fringe groups into the party.

“He has hung around with a lot of anti-Israel campaigners,” she said. “On the fringe a hatred of Israel attracts people with a hatred of Jews. There has been a blurring of those lines.

“(Anti-Semites) felt emboldened and found there weren’t any consequences, so it grew… They started accusing anyone who raised anti-Semitism as somehow smearing Jeremy… they saw it all through the prism of ‘you’re attacking Jeremy’ and shut down debate.”

There are hundreds of backlogged cases of anti-Semitism the party has not dealt with, the insider said.

At recent party conferences she had heard conspiracy theories involving Jewish bankers or controlling figures, she said – and even Holocaust denial and revisionism.

“I’ve worked in and around the Labour Party for a very long time. To see it suddenly descend, to see a progressive party start believing and sharing anti-Semitic tropes and not believing them when they say they’re worried… a lot of us feel like we are outsiders in our own party.”

It is a real, existential threat to the party, she said.

“Every week there’s a [Labour] councillor somewhere saying something horrible about Jews. It eats away at what you should be. And it will have an impact in the polls because people feel uncomfortable with the party the way it is.”

The ball is in Corbyn’s court, she says. “He needs to say ‘I will come down on you like a ton of bricks, I will quadruple investigation of anti-Semitic incidents, MPs who talk about anti-Semitic conspiracy theories will be immediately suspended’.

“I don’t think he wakes up every morning wanting to hurt Jewish people. But I think he has a blind spot when it comes to anti-Semitism and Jews… What people like about him is he’s consistent and sticks to his principles but that’s also part of the problem. We’re asking him to change his mind on something and I don’t think he’s capable.”

The latest YouGov poll put the Conservatives and Labour neck and neck on 40 per cent, with Theresa May on 37 per cent as preferred prime minister, tied with “don’t know”, and Corbyn on 26 per cent.

If there is a silver lining for Corbyn, it is the self-inflicted mess that May’s Conservatives fell into this week after it was revealed their hardline immigration policy had led to appalling injustices for the so-called ‘Windrush generation’ from the Caribbean.

As one commentator in The Times put it, “Prime Minister’s Question Time (in parliament) has been reduced to ‘who’s got the bigger racism problem”.