Lawyers suing security companies who worked in Victoria’s bungled hotel quarantine program need to work out which hotel the COVID-19 strain that killed their client’s father came from before the class action can proceed.

Law firm Arnold Thomas & Becker is pursuing Unified Security Group and MSS Security on behalf of lead plaintiff Dragan Markovic, whose father contracted COVID-19 in a nursing home and died at the end of August in hospital. 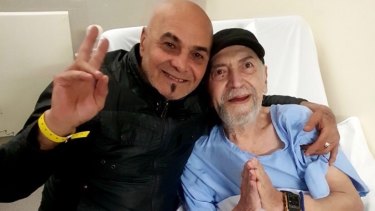 The last photo of Dragan Markovic with his father Nenad Markovic before the elderly man’s death from COVID-19.

He was among the 800 people who died in Victoria’s second wave, with 99.8 per cent of cases traced back to outbreaks in the quarantine program at two of the hotels: the Rydges on Swanston and the Stamford Plaza.

The case is one of three Victorian class actions arising out of the pandemic. The other two, one from businesses and the other from a young man who lost his job, focus on economic losses caused by the lockdowns last year.

In Mr Markovic’s case, his lawyers allege failures by the security companies led to the spread of the virus.

Tim Tobin, SC, told the Supreme Court on Wednesday they were still unable to say which hotel the strain Nenad Markovic contracted came from.

“There’ll be no doubt it’ll have come out of one of the hotels,” Mr Tobin said.

Unified Security supplied guards to the Rydges – the site where 90 per cent of cases came from – while MSS provided security for the Stamford.

MSS Security’s lawyer Lachlan Armstrong, QC, said there was a slight chance Mr Markovic was infected with a strain that didn’t come from the hotels.

The hearing before Justice John Dixon heard the plaintiffs couldn’t directly use evidence put before Justice Jennifer Coate’s inquiry last year into the bungled program. The inquiry found there was a lack of training provided to workers and inadequate infection control processes among a litany of other failures.

Mr Tobin told the court that didn’t prevent them from independently accessing some of the inquiry’s evidence, such as calling the same witnesses who were before the inquiry.

Justice Dixon adjourned the case for a date later in March.

The court also dealt with two other COVID-related class actions brought on the basis of the economic loss caused by the state government’s lockdowns.

In one, lead plaintiffs Keilor Park restaurant 5 Districts NY and its owner Anthony Ferrara, represented by lawyers from Quinn Emanuel Urquhart & Sullivan, allege the government’s bungling of the hotel quarantine program led to restrictions that devastated businesses throughout the state.

In the other, 21-year-old Jordan Roberts, who lost his job at a Tullamarine warehouse just after stage four restrictions came into force, and Carbone Lawyers allege his retrenchment was the result of mistakes by the government in hotel quarantine.

Rachel Doyle, SC, is defending the government in both class actions and the court heard on Wednesday that the defendants are applying to strike-out both cases in a hearing in May.

Other court action against the government’s COVID-19 policies has so far failed.

Restaurant owner Michelle Loielo lost her lawsuit last November in which she alleged the curfew during lockdown was unreasonable or disproportionate and infringed her human rights.

The High Court also dismissed a constitutional challenge from Sorrento hospitality figure Julian Gerner, who tried to argue the restrictions violated his freedom of movement.