Let’s dip our lids to Michael’s hats for happiness

When Michael Albert opened his Fitzroy shop 14 years ago, he intended to make artisan hats in an old-school way but with a contemporary twist.

Then came something he hadn’t expected: the number of customers who come in wanting – for medical reasons – some custom-made cover. 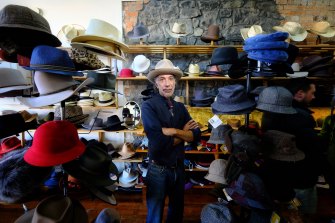 At least 10 per cent of the shop’s clients, three or four people per week, are undergoing some form of serious treatment, from hair loss due to chemotherapy, skin grafts on their foreheads or lesions from melanoma. Albert says, it’s a “whole lot of Anglo Saxons in a very sunny country”.

The 61-year-old, born in Mauritius, opened Smart Alec Hatters on Gertrude Street in 2008 in collaboration with millinery makers Scally and Trombone. He says some clients now come in referred by their dermatologist or other specialists.

The hats do more than provide cover for the “’60s babies” who saw too much sun, Albert says. They allow their wearers to feel comfortable in public.

Albert says it’s just an object, but its effect is immense. “Often they’re not a lot of money, but it’s more about how it makes you feel.

“My main attitude is I want them to look as good as they can and not to look like a patient,” he says.

“I’m of an age where a lot of my friends and relatives are also undergoing these treatments, so I know how it feels just to be able to look good to go out to lunch or put something nice on that’ll make you happy.”

One customer The Age spoke to is dealing with a terminal illness.

“I feel pretty down at the best of times,” the customer, who did not want to be named, says.

“You need to find ways, and especially when we’ve had COVID as well, of making you feel better about who you are, and improving your own self-esteem.

“You can live in a pair of trackie dacks [but] it doesn’t make you feel good because it becomes a uniform. If you want to get ahead, get a hat, someone once told me.”

Since meeting in the shop, the two men have bonded over their collections of cut-throat razors.

The customer says Albert’s sensitivity and “nice laidback style” go above and beyond the demands of retail.

“It’s not just putting a hat on your head. It’s the whole process about feeling good about yourself and Michael helps that.”

This year already, two of Albert’s favourite clients have succumbed to their illnesses.

Last month, a client came in to return two custom hats Albert had made and told him, “Michael, I’m gone. This is my third bout of cancer treatment. Basically, I’m f—ed mate. I’m giving these back to you. I know you’ll find a nice home for them.”

He has put the hats aside for someone else to wear in the future. “That was another tough day because you’re saying goodbye to one of your nice clients.”

Albert says many of his clients have been stuck indoors during the pandemic, so he began making face masks that match the design of their custom hats. “I was calling it lockdown fashion. We’re locked down, but at least we look good.”

The shop’s range has expanded to scarves, beanies, cufflinks and ties, while Albert’s work has led to friendships – both long and fleeting – with clients doing it tough.

“To get a hug from a complete stranger because you’ve made them so happy, that’s more than retailing right there,” he says. “Like, that’s sort of bonding and connecting with them and the commerce is just something we do on the side.”