Lindsey Graham admittedly doesn’t know much about the Jacob Blake shooting setting off protests in Kenosha, Wisconsin. But when asked about it during a press conference on Tuesday, the U.S. senator from South Carolina immediately questioned why the 29-year-old father “didn’t yield” when he was approached by police.

“I don’t know what happened there. Let’s find out,” Graham said before promptly adding, “It’s dangerous being a cop. I don’t know why the gentleman didn’t yield when he was asked to yield.”

The reporter who asked Graham about Blake made sure to note that the viral video of his shooting did show Blake being shot in the back seven times. He also pointed out that Blake’s father now says the shooting victim is paralyzed from the waist down. “Do you see how it would make those folks who did protest peacefully — the ones who protested peacefully in the streets — feel like they were not heard when they see an incident like this?” the reporter asked.

Republicans have taken a clear stance during this time of social unrest following the death of George Floyd in Minneapolis. During the Republican National Convention now taking place virtually, several speakers have attempted to paint a picture of a nation in chaos, overrun by anarchist and violent protesters. Graham, on Tuesday, made it clear that he stands on the side of the police. He was publicly endorsed by South Carolina’s Fraternal Order of Police and pledged to continue working in the Senate to represent them. 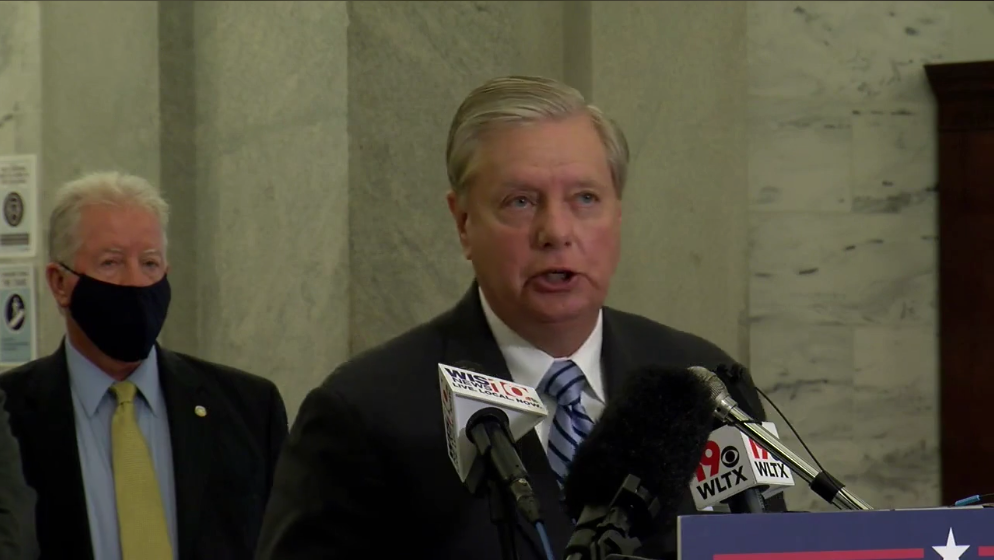 During the press conference, the representative for the FOP made reference to Graham’s opponent, Jaime Harrison, saying the matchup represents “ideological differences.” While Graham “fights for law enforcement” according to the rep, he called Harrison’s endorsement from Move On, a civic action group that supports redistributing police funding to social justice causes, “shameful and unacceptable”

Graham promised to earn the endorsement by the FOP and work diligently in the Senate to address the “rise in violent crime” against law enforcement and the “lack of public support.” Both of which he says are orchestrated “by the most radical elements in American politics.”

After nearly 30 years in Congress, the unpopular politician is facing a tough reelection race against Harrison. Polls show he is losing his footing in a state that’s long been recognized as a Republican stronghold. Though Graham and Harrison seem to fundamentally disagree on the approach to policing, Graham did say when addressing the case of Jacob Blake that “Police are not above the law.” He added, “There are places where police act with impunity. This is not one of those nations.”