Lion roars at man through his open kitchen window

‘We just need coffee!’ Hair-raising moment a LION roars at man through his open kitchen window as he tries to make a morning brew in South Arica

A man found his morning coffee routine interrupted when he was greeted by a growling lion sat outside his open kitchen.

Dylan Panos, 46, who runs the nature guide training company Bhejane Nature Training in northern KwaZulu Natal, South Africa, was about his make himself his morning brew when he spotted eight lions wandering through his campsite.

As he drew closer to his window he noticed one particularly feisty lion staring at him and growling through his open window.

A lioness was lying right next to the kitchen and in a bid to pursue her, the lion refused to move, leaving Mr Panos with no option but to continue making his much-needed coffee. 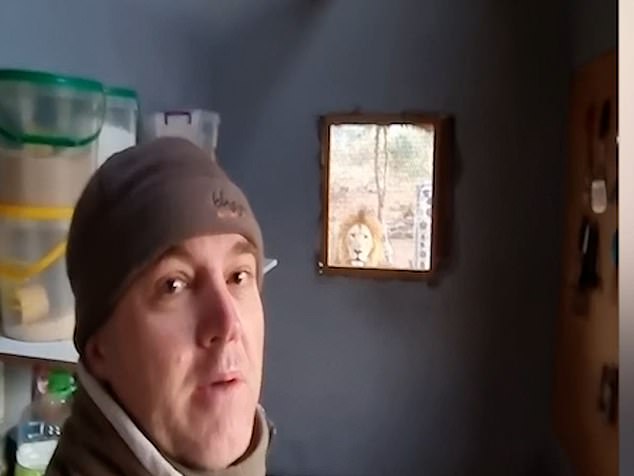 Dylan Panos, 46, wakes up to find a lion sat outside his open kitchen in northern KwaZulu Natal, South Africa 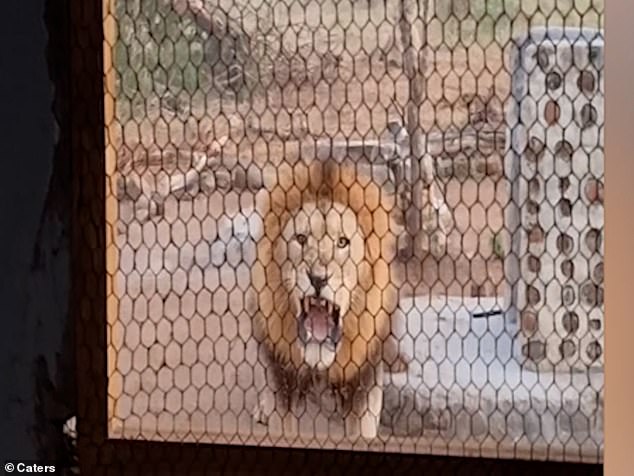 Mr Panos, who runs the nature guide training company Bhejane Nature Training, calmly watches the lion as it roars at him 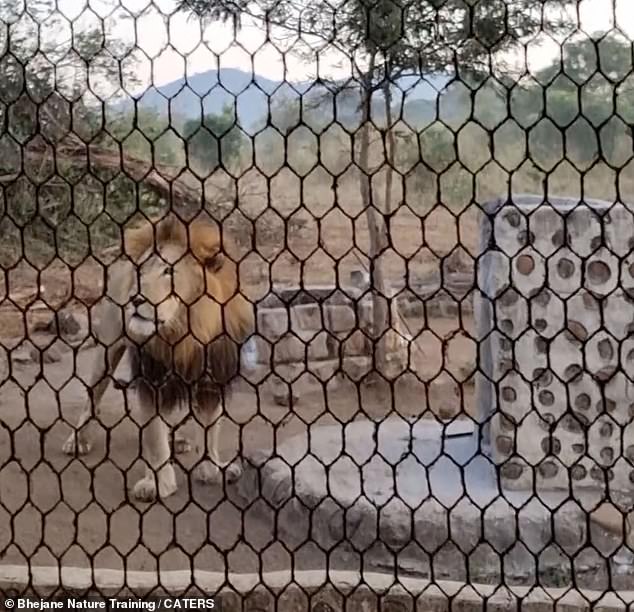 During the clip, Mr Panos looks at the roaring lion sat outside his window, which is covered in chicken wire, and contemplates whether it would be wise to remain in the kitchen to make his morning coffee.

He says: ‘So my kitchen is growling at me this morning. As you can see we’ve got a beautiful lion looking through my kitchen window and I just need to get to that kettle to make some coffee that’s all.’

Just seconds later, the lion begins to roar and Mr Panos continues: ‘The decision is shall I go cold turkey this morning and have no coffee? What a dilemma.

‘We’ve got a honeymoon couple in camp and the lioness is lying right there by the wall and we can’t make our coffee this morning. Very rude behaviour.

Mr Panos soon manages to place his kettle on the gas hob and adds: ‘Ok I managed to get the kettle on so we’re going to have a good cup of coffee this morning.’

Further footage shows the lioness lying next to an open doorway while Mr Panos continues to film calmly from inside.

Mr Panos said: ‘I was not frightened. I am after all trained to live and work around these animals, but I was very cautious.

‘One would never approach mating lions since they are prone to showing aggression, however, we did want to encourage them to move off for the safety of the camp and to gain access to the kitchen obviously. 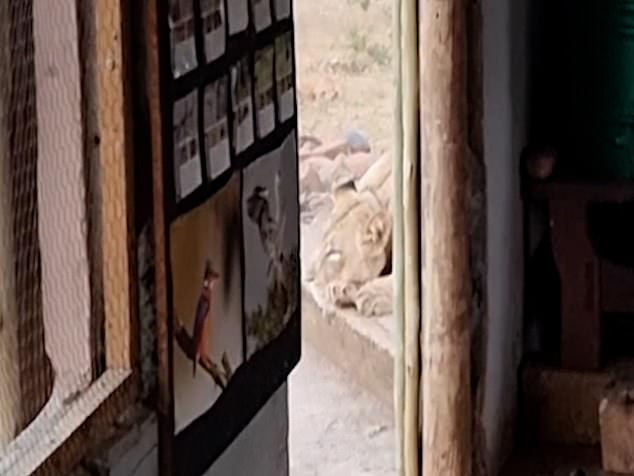 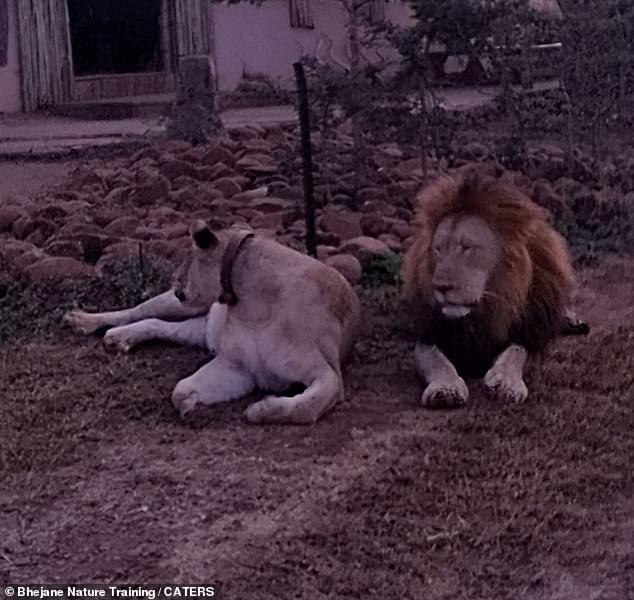 The lion, who refused to move away from the lioness he was guarding, sits outside Mr Panos’ kitchen 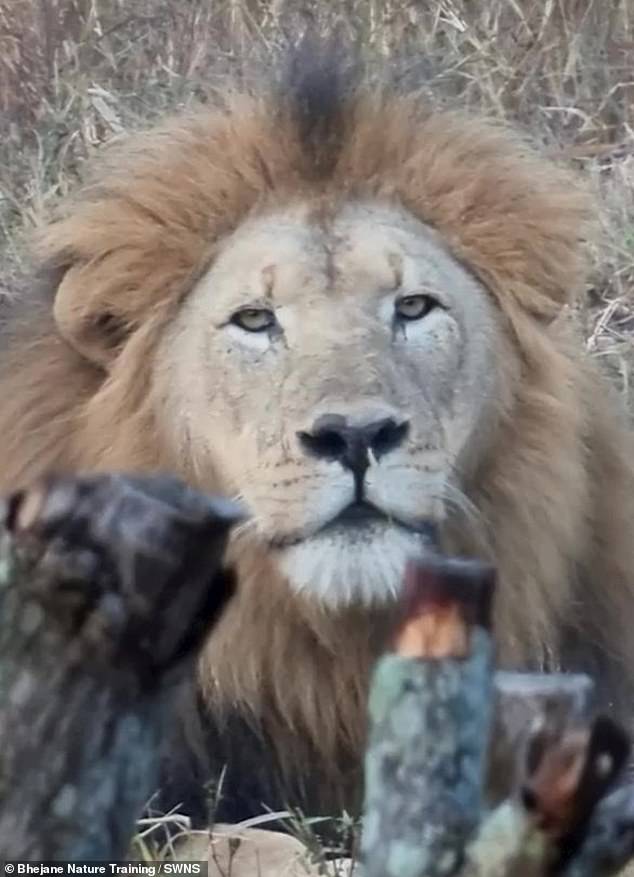 ‘It is an open building. There are no doors and the windows have only mesh covering.

‘This is just because it is a rustic bush camp and we try to make do with minimum infrastructure there.

‘We are all aware that the camp is open and everyone knows to be on guard and have good situational awareness at all times.

‘This is after all what the students are training for, to be able to take their guests eventually into unspoilt wild areas, so to know how to do this safely, they must be able to live in such open camps, and know how to behave if an animal encounter does occur.

‘The lions were in camp for around an hour before eventually moving off and I got a nice cup of coffee in the end.’

The unfenced camp in the Somkhanda Community Game Reserve sits within the ‘big five’ territory, meaning lions, leopards, rhinos and elephants are often spotted walking through but according to Mr Panos it is rare for them to approach the buildings. 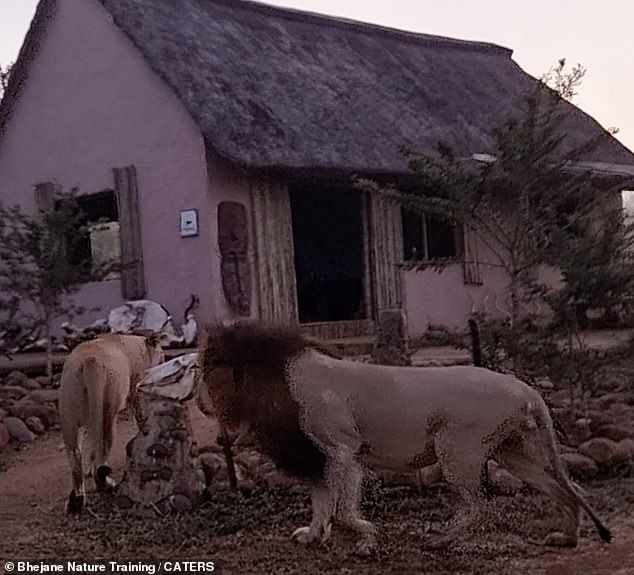 He added: ‘We have animals like elephants and lions move around our camp quite frequently but it is quite rare for them to move through the buildings as they did this time.

‘It is also rare for them to be around human areas when mating – but we are assuming the female used this to her advantage to discourage the male from pursuing her – seems he had other plans and would not be so easily discouraged.

‘The lions moved off, and the students were quite excited to chat about the incident at breakfast.

‘We have often encountered the lions on foot when we are out on trails, and usually they will simply move off and avoid humans, so it was quite special to have them laze about in camp as they did on this morning – essentially claiming our territory and not bothered by us at all.

‘This was a great learning experience for the students but is not an experience anyone would like to have if they were unprepared for it.’