‘Listen to the scientists’: Biden implores Trump as he campaigns in crucial Florida

Miami: As President Donald Trump announced he would leave a military hospital on Monday after three days of COVID-19 treatment, challenger Joe Biden attacked the president for downplaying the seriousness of the disease even after contracting it.

"Now that he's busy tweeting campaign messages, I would ask him to do this: listen to the scientists," Biden said during a campaign speech in Miami's Little Havana neighbourhood. "Support masks." 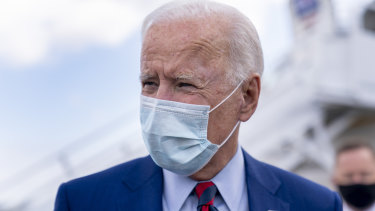 Biden, the Democratic former vice-president, also spoke in the city's Little Haiti neighbourhood and planned to appear at a NBC News town hall in the evening from Miami.

Florida is seen as a must-win for Trump's re-election campaign, which has almost no path to victory if he fails to collect the state's crucial 29 Electoral College votes.

Trump said on Tuesday AEST that he was feeling well and would leave Walter Reed National Military Medical Centre in the evening. The 74-year-old president, who announced his coronavirus diagnosis late on Thursday night, local time, was transported to the hospital on Friday after developing a high fever and receiving supplemental oxygen.

Biden, who has made Trump's uneven response to the pandemic a central theme of his campaign, sent well wishes to the president but also argued that Trump's illness only reinforces the need to take the virus seriously.

The Biden campaign has avoided large-scale events for months, instead holding more controlled stops with few attendees. Throughout his remarks on Monday, Biden kept a mask over his face.

Trump has repeatedly soft-pedaled the deadliness of the disease, even as it has killed nearly 210,000 Americans and devastated the economy. Before falling ill, he had continued to hold massive rallies with little social distancing, and the virus has torn through the White House and Trump allies for days.

Florida was the most important of a dozen states that had voter registration deadlines on Monday.

Trump has taken a hard line on Cuba, reversing many of the steps toward normalising relations that began under the Obama administration, when Biden was vice-president.