Melbourne’s road out of lockdown might drag on longer if a leap in COVID-19 cases linked to illegal home gatherings and parties at the grand final long weekend becomes a trend.

Victoria recorded 1438 new cases on Thursday – 488 more than Wednesday and by far the highest daily total on record. Contact tracing interviews revealed about 500 of the new cases may have stemmed from gatherings on Friday and Saturday. Five deaths were also recorded. 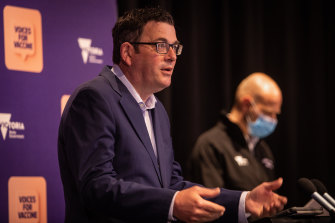 COVID-19 response commander Jeroen Weimar described the weekend’s rule-breaking as a city-wide superspreading event that pushed the virus into new pockets of Melbourne. He said it could result in case numbers reaching the upper range of the Burnet Institute’s outbreak modelling, though one of the lead modellers cautioned against reading too much into one day’s data.

“Today is a significant setback in how we manage this outbreak,” Mr Weimar said. “If this trend is continued … we will jump to the worst quartile of those Burnet projections.”

With a greater proportion of men among the caseload, the outbreak spreading outside northern hotspots into the eastern suburbs and a 15 percentage point increase in road traffic, the numbers painted a picture of a weekend of socialising by weary Victorians keen to watch the footy with loved ones.

Premier Daniel Andrews said the rule-breaking was understandable but inexcusable, affirming his intention to lift the lockdown. But he warned that if case numbers and hospitalisations continued to grow the easing of restrictions planned in late October might need to be postponed.

“We are not turning back. This is a plan to open … [and] we are finding a way to push through and get this place open,” he said.

“However, it would be irresponsible for me to say we wouldn’t, for instance, have to pause, we wouldn’t have to modify things.”

“I wouldn’t want to give the impression I’m lecturing people, but this is an important part of the job. I’ve got to be as frank and direct as possible and some poor choices have led to these case numbers today.”

The government also halved the Pfizer dose interval (from six weeks to three weeks) in an attempt to reach vaccine targets earlier, welcomed the receipt of 88,000 unused Moderna doses from pharmacies and announced a ban on opening toilets at golf courses and tennis clubs would be reviewed. But despite a federal government move to release Pfizer to over-60s at GP clinics and pharmacies, the Victorian government will not administer Pfizer to older people at state-run hubs.

The Burnet’s modelling of COVID’s spread in Victoria – which informed the state government’s road map out of lockdown – predicted a first peak in daily average infections of between 1400 and 2900 in the final two weeks of October. Earlier this week, epidemiologists told The Age that higher than expected vaccination rates could mean Victoria avoids the worst-case scenario.

Mr Weimar said the trajectory of the outbreak was still in Victorians’ hands, but Thursday’s increase was caused partly by tired Victorians who felt they “deserved a bit of a payback … [and] a nicer time”.

However, if infections continue to grow from Thursday’s number then cases could reach the “upper limit” of Burnet’s estimates for this point in the outbreak, Mr Weimar said, urging anyone who attended grand final gatherings to get tested.

“It’s a significant setback on our Burnet road map … [but] today may just be one rogue day,” he said.

Margaret Hellard, of the Burnet Institute, said it was not yet known if the apparent non-compliance at the weekend would have a longer-term effect.

“While a high number today is disappointing and concerning, it’s important to look at an overall trend in the numbers,” said Professor Hellard who co-authored the Victorian modelling.

University of South Australia epidemiologist Adrian Esterman said the case increase was concerning, but he believed it would soon be “crunched” by high rates of vaccination.

“It is troubling that people seem to be ignoring these requirements to social distance. Will it be a permanent effect? Hopefully not,” Professor Esterman said.

Mr Andrews said 49.8 per cent of Victorians were fully vaccinated, just shy of the 50 per cent mark, which was the milestone at which he said NSW started to see its case numbers decrease.

NSW Premier Gladys Berejiklian said she wished Victoria the best after the rise in case numbers. 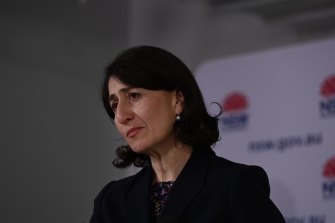 “I say to them be optimistic about the future,” she said. “Yes, it is a difficult time, but you’ll get through this, as we did.”

A looming overhaul of NSW’s contact tracing rules would allow fully vaccinated people who visit pubs, restaurants and shops to no longer be identified as close contacts and forced to isolate for two weeks if exposed to COVID-19.

The public health guidelines, updated this week, shed light on options the state government was considering when dealing with COVID-19 exposures as the state begins to open up in October at 70 and 80 per cent vaccination coverage.

In Victoria the number of people in hospital at the time the state reaches vaccine milestones will be a key determinant of whether the government eases restrictions, meaning suppressing case numbers in October will give the state the best chance of coping with the projected case rise when rules ease.

The Burnet modelling showed hospitals would be overwhelmed in 45 per cent of scenarios when there were 1000 to 1500 hospitalisations as the state eased restrictions at 80 per cent. There were 398 people in hospital on Thursday, but this figure is expected to rise as the high daily caseloads over the past week translate into hospital admissions.

Federal Health Minister Greg Hunt announced on Thursday that all Australians over 60 would have access to the mRNA Pfizer and Moderna jabs from GPs and pharmacies from October 1.

Over 60s were restricted to AstraZeneca while supplies of Pfizer and Moderna were limited.

A spokeswoman for the Victorian government welcomed the move, but said state-run hubs would not administer Pfizer vaccines to older people.

“Victoria’s state-run hubs continue to prioritise access to Pfizer for people under 60, including teenagers who have no alternative option for vaccination,” the spokeswoman said.

Mr Andrews has refused to comment on WorkSafe charging the Department of Health over infection control mistakes in hotel quarantine that drove the state’s deadly second wave of COVID-19, saying it would be inappropriate to comment on a matter before a court.

With Lucy Carroll and Rachel Clun

Stay across the most crucial developments related to the pandemic with the Coronavirus Update. Sign up to receive the weekly newsletter.