Lockdown lovers? Almost 25% of Brits have touched a stranger indoors

Are lockdown lovers leading a rule rebellion? Almost a quarter of British adults had physical contact INDOORS with someone from outside their bubble in the first week of November

Almost a quarter of British adults ignored lockdown rules to have ‘physical contact’ indoors with someone from outside their home or support bubble last week, new figures revealed today.

The Office for National Statistics (ONS) said that 22 per cent of over-16s admitted touching someone else while socialising inside in the previous 24 hours, raising fears that ‘lockdown lovers’ are ignoring frustrating rules.

The worst offending age groups were those aged 16-29 (23 per cent) and those aged 50-60 (25 per cent), according to a survey carried out in the first week of November.

At the time, all four UK nations had rules prohibiting physical contact between people you either did not live with or who were in your ‘social bubble’.

The survey was carried out between November 5, when the English lockdown started, and November 8.

But despite the introduction of the stricter rules to combat a coronavirus second wave, a similar proposition admitting breaking the rules indoors as seen the previous week (24 per cent)

This was in settings such as private homes, cafes, pubs or restaurants, excluding those in their household or support bubble. 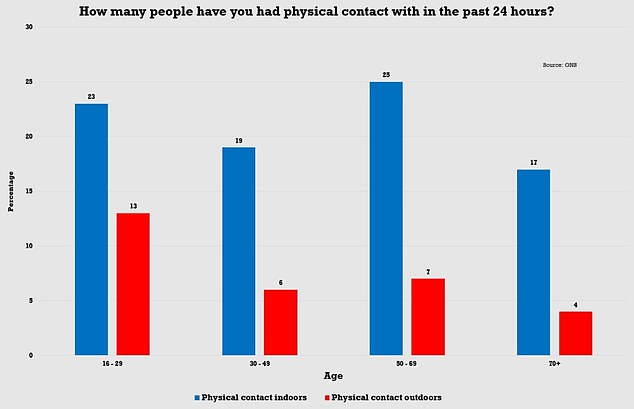 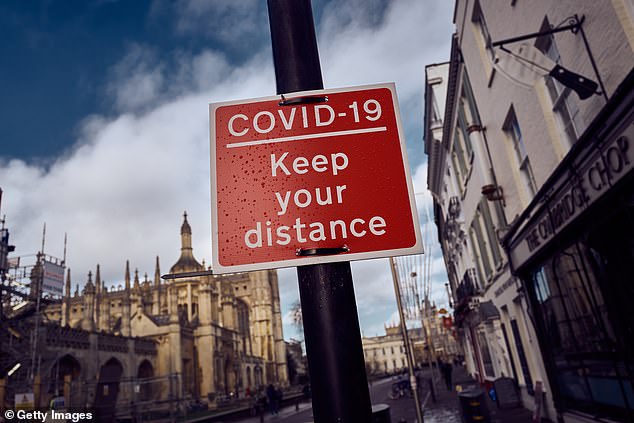 The Office for National Statistics (ONS) said that 22 per cent of over-16s admitted touching someone else while socialising inside in the previous 24 hours, raising fears that ‘lockdown lovers’ are ignoring frustrating rules

The ONS questioned adults about their behaviour between November 5 and 8 as part of its Opinions And Lifestyle Survey, receiving 4,378 responses.

Public health messaging throughout the coronavirus pandemic has consistently advised people to try to keep a distance from those not in their household or bubble.

A four-week national lockdown for England was imposed on November 5. Over the survey period, Wales was also on a national ‘firebreak’ lockdown, and Scotland had five-tiered ‘local protection levels’.

People were asked about their behaviour over the past 24 hours, so the data also covers the day before England’s lockdown was imposed.

Of 4,190 respondents in England, 19 per cent said they had had direct contact with between one and five people who were not in their household or bubble while socialising indoors.

Examples of direct physical contact may include shaking or holding hands, hugging, and making contact when passing objects, the ONS said.

A quarter (25 per cent) of adults aged 50-69 said they had physical contact while socialising indoors with someone who was not part of their household or bubble.

More than a third (36 per cent) of those polled said they had not had direct contact with anyone outside their household or bubble while socialising indoors.