Lonely disabled mother, 62, who jumped to her death from third-floor window was being looked after during lockdown by a carer who did not speak English, inquest hears

A lonely mother who threw herself to her death out of a third floor window was being looked after by a carer who did not speak English, an inquest was told.

Georgina Hindmarch became isolated after her son and daughter-in-law moved out and she was left with the carer who could not converse with her.

Lying at the bottom of her block of flats, the 62-year-old told a police officer ‘just let me die’ after plummeting 25ft.

An air ambulance crew flew her to St George’s Hospital in London, before doctors discovered her horrific injuries were ‘unsurvivable’ hours after the fall on July 5. last year.

A coroner heard that the woman was left ‘needing company’ after her son and daughter-in-law had moved out of the Priory Heights flat in Slough, Berkshire. 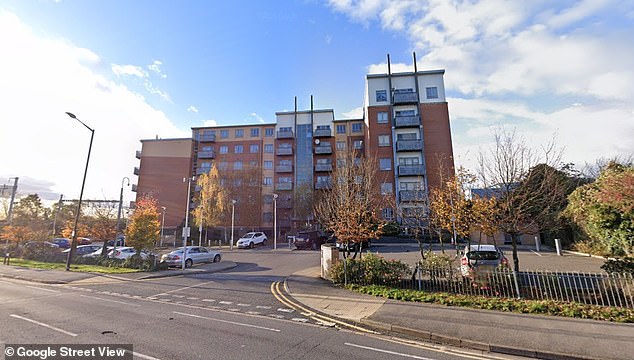 Georgina Hindmarch, 62, told a police ‘just let me die’ as she lay on the ground after she fell out of a third-floor window of an apartment block in Slough, Berkshire, an inquest into her death has heard

Mrs Hindmarch was left with just a few tins of food in the house as her son used to sort out the household bills and do the weekly food shop – before a care agency stepped in and began visiting her four times a day to help with her needs, the inquest heard.

Worried friends told mental health professionals that she was tearful all the time. She felt lonely and said that her carer could not speak English.

Attending the inquest with a Somalian translator was carer Hawo Sharif, who worked for the Oasis Care agency and had been making the visits to Mrs Hindmarch.

Through the translator, she told the assistant Berkshire coroner: ‘Before July 5 the only thing I noticed was that the client often felt lonely and pleaded with me to stay longer than the duration of my visit.

‘On the morning of the incident, I found Georgina holding a broken glass. She had a cut to her hand that was bleeding. I immediately informed my office who called an ambulance.

‘I prepared breakfast for her before an ambulance arrived and treated her for her injuries. I was asked to stay with the client until a supervisor arrived. While I was waiting for the supervisor, the client informed me that she was tired and wanted to go to sleep.

‘At this point I put her to bed and she seemed to be going to sleep. I was sitting downstairs when I heard an unusual noise coming from the client’s bedroom. When I entered the bedroom, the client was missing from the bed and the window was open.

‘I looked out of the window and saw her lying on the floor outside.’

A statement from the ambulance service said: ‘At 10.56am, there was a call to Thames Valley Police who arrived on the scene and were told that the woman had fallen out of the window. It was believed she had climbed or jumped out of the window.

‘The paramedics found that the patient was lying on the floor and her legs were clearly fractured. She was talking and requesting that her legs be straightened out as they were angulated and twisted. She was thought to have fallen from a height of 20 or 25ft.

‘She was airlifted to St George’s Hospital and she was handed to the resuscitation team. It was thought in addition to the injuries to her legs, she also had rib and chest injuries.’

However, after hours of treatment, doctors at the specialist London hospital confirmed that her injuries were ‘unsurvivable’ and she was pronounced dead at 7.02pm that day.

A pathologist gave the cause of her death as multiple organ failure due to polytrauma.

She said: ‘Georgina Hindmarch was a 62-year-old lady. At the time of death she was living alone and she had a number of physical issues.

‘She had told her carer Mrs Sharif that she was tired and wanted to go to sleep. When Mrs Sharif heard a noise, she found Georgina was not in bed and the window was open.

‘I consider that she deliberately threw herself out of her window…it is hard to believe she could have accidentally fallen out of the window particularly given that she had compromised mobility and she needed care four times a day.’