A plasterer who won £1million on the National Lottery has thanked a shopper who let him be served first as the draw was about to close.

Arron Walshaw, 32, and his fiancee, Ceri Hall, 23, from Ossett, West Yorkshire, can plan their dream wedding after they scooped the seven-figure Lotto Raffle prize.

Had the other shopper at the Tesco Extra store not let him go first, Mr Walshaw, who has a baby daughter with Ms Hall, believes he would not have had time to play.

He said: ‘We had a free Lucky Dip ticket from the previous draw to use and I knew it was only minutes until the draw closed. 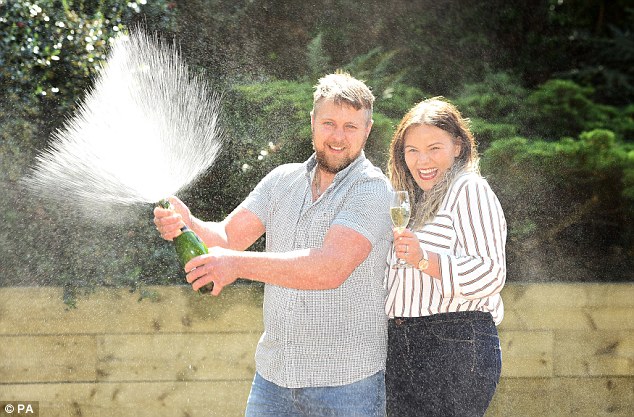 Arron Walshaw, 32, left, and fiancee Ceri Hall, 23, right, are celebrating after he scooped £1million on a National Lottery raffle 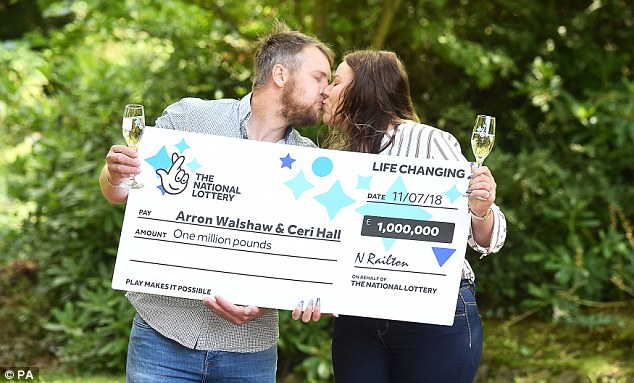 Mr Walshaw, pictured celebrating with his fiancee, said he almost ran out of time to buy the winning ticket but another shopper let him go before her in Tesco

‘I popped in to a nearby shop where me and another lady approached the same cashier.

‘She must have seen that I was in a rush because she insisted I went before her.

‘What a stroke of luck that turned out to be! I don’t think I would have been in time to buy my ticket if she hadn’t let me go first.

‘We would love to meet her again and say thank you for changing our lives!’

He bought another Lucky Dip and that evening the couple counted their collection of pennies and they were ‘chuffed’ to find they had £50 for a camping trip.

It was not until they checked the app the next day after work that they discovered they were millionaires.

The self-employed plasterer said he has no plans to hang up his trowel just yet but will reduce his hours.

He said: ‘We’ve got a wedding to plan and I want to make it the wedding of Ceri’s dreams.’ 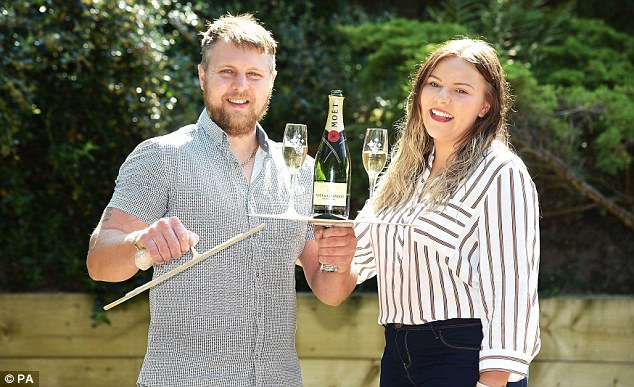 The couple, pictured with champagne, said they would like to meet the shopper again and thank her

They will use the cash to buy their first house and car.

Ms Hall said: ‘This is just life changing for both of us.

‘We’ll be able to do so much that we could never afford to do. I can’t wait to see what the next year will bring us!’

‘I decided to Google it and typed in ‘what does a million look like in figures’,’ she said.

‘Then I saw that one and six zeros.’

A month ago Ms Hall had her Ford Fiesta written off when another driver ploughed into her while her baby daughter was a passenger and they plan to replace the vehicle.

Both are singers and met when Ms Hall, who has auditioned for Britain’s Got Talent, was DJing at a local pub. 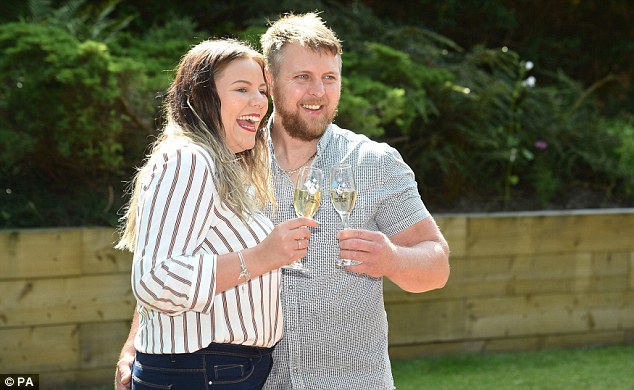 Mr Walshaw and Ms Hall, pictured, say they will spend their cash on their dream wedding

They had been desperate to move out of their rented accommodation and had been on the waiting list for a council house for 18 months before the lotto win.

They have already viewed two properties.

Mr Walshaw proposed  in October, last year, on a romantic log cabin break in Northumberland when he wrote on a scrabble board with the tiles ‘CERI HALL WILL YOU BE MINE FOREVER AND MARRY ME ‘ and placed an engagement ring he bought on finance beside the message.

Ms Hall was six months pregnant at the time.