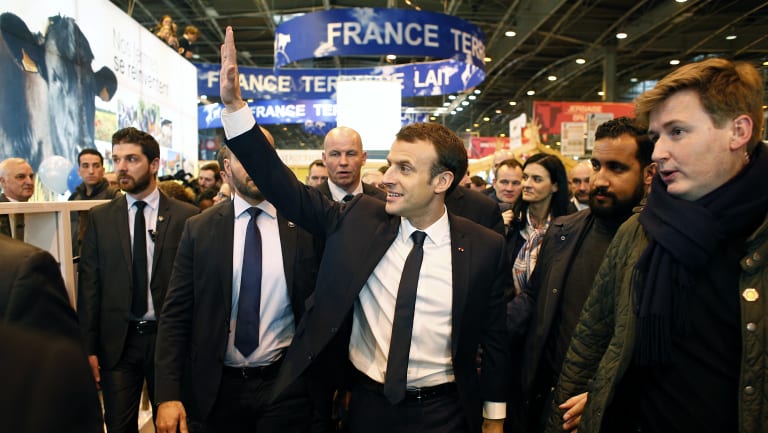 French President Emmanuel Macron is in Australia this week.

Fresh from his state visit to the White House, French President Emmanuel Macron is in Australia this week.

While the official announcement from Prime Minister Malcolm Turnbull says Macron is coming to talk about trade and defence industry partnerships, security – particularly the future of the Iran nuclear deal – will also feature on the agenda during the three-day stay.

This is all the more likely given Israeli Prime Minister Benjamin Netanyahu’s revelation on Monday that his spy agency Mossad had obtained Iranian files proving that Iran had been lying to the world for years over the so-called “peaceful” nature of its nuclear program. In fact, the files show Iran’s end-game has always been producing nuclear-armed ballistic missiles with a global reach.

Moreover, US President Donald Trump has threatened to withdraw his country from the Joint Comprehensive Plan of Action on Iran (JCPOA) by May 12. This week, in Macron’s presence, he reiterated: “It was a terrible deal. It should have never, ever been made”, but did not elaborate on his specific plans.

France is a serious partner in the fight against Islamist terrorism and the regimes that harbour it. The French military participated in the recent retaliatory attack on Syrian targets following yet another of Bashar al-Assad’s unforgivable chemical attacks on his own people. French soldiers are also heavily involved in peacekeeping missions in the African Sahel and Macron has strongly advocated for international support for the G5 Sahel countries – Burkina Faso, Mali, Mauritania, Niger and Chad – who are facing threats and destabilisation from a number of Islamist terrorist groups.

During his Washington visit, Macron told a joint sitting of the US Congress of his objective in dealing with Iran: “Iran shall never possess any nuclear weapons. Not now, not in five years, not in 10 years. Never.”

Yet he did reiterate France’s ongoing commitment to the flawed JCPOA to which both the US and France are signatories. But in an important shift in his position, he pledged that France and the US can “work on a more comprehensive deal” to ensure that Iran never develops a military nuclear program, to contain Iran’s influence in the region and to monitor its conventional weapons building capacity. Macron said France will not leave the JCPOA “because we signed it”.

The original objective of the JCPOA was to stop Iran from gaining nuclear weapons in the near term, but it is clear that it has in fact boosted both Iran’s dangerous regional influence and its military capability.

The 2015 deal has many critics – Trump among the most vociferous – who focus on three main weaknesses.

First, the restrictions placed on Iran’s nuclear development program under the JCPOA expire in just 15 years. In the meantime, under the terms of the deal, Iran can continue undertaking some nuclear research so its nuclear weapons program is widely assumed to be progressing in the background.

Second, inspectors from the International Atomic Energy Agency have not been given full access to Iran’s nuclear facilities and therefore have no way of properly verifying whether Iran is complying with the conditions of the agreement.

Third, Iran is continuing its role as one of the Middle East’s most active supporters of terrorism. Instead of using the money flowing in as a result of sanctions relief to improve the life of its own citizens, it is buying weapons for some of the world’s most dangerous and hateful groups, as recent protests in Iran testify.

In a related concern, Iran also continues to work on its ballistic missile program in breach of United Nations Security Council resolution 2231. This program is aimed at developing the delivery system for any future nuclear weapons.

While Australia is not a signatory to the JCPOA, which was agreed to between Iran, the US, Russia, China and France, the United Kingdom and Germany, Australia has been supportive of the deal.

Yet, Macron’s statements during his US visit provide hope that the impasse over the Iran agreement may soon be resolved.

During Macron’s trip to Australia, his hosts should take the opportunity to encourage some of our closest allies – the US, the United Kingdom and France among them – to continue working hard to create new conditions that truly restrain the dangerous, expansionist regime in Iran, particularly in Syria.

Indeed Macron’s visit provides a suitable opportunity for Australia to review its approach and publicly declare its support for a more effective agreement with Iran.

In the absence of serious improvements, Tehran will continue to spend its growing trade revenue on a deadly missile program, ongoing nuclear development and further increasing its own dangerous regional influence. The risks to global security are obvious, from Iranian support for international Islamist terrorism to the escalating Iranian security threat posed to Australia’s friends, Israel and its Arab and Gulf State neighbours.

With France and the US in broad agreement about the JCPOA’s flaws, it would be timely for Australia to realign its approach behind an improved deal with Iran.

It is in Australia’s national interest to reinforce Macron’s awareness that a serious effort needs to be invested in either improving the problematic JCPOA or at least ensuring additional steps are taken to curtail one of the world’s most dangerous states before it is too late.

Naomi Levin is a policy analyst at the Australia/Israel and Jewish Affairs Council.