Man charged, hunt on for 10 others after violence at anti-lockdown protest

A man has been arrested and police say the search is on for 10 others following violent scenes at a protest in Melbourne’s inner east earlier this month.

A police spokeswoman said many officers were injured during the anti-lockdown rally in Richmond, Burnley and Kew on September 18, including six who were sent to hospital.

On Thursday, eastern region crime squad detectives arrested a 21-year-old Brunswick West man following the assault of a police officer at the protest.

The spokeswoman said the man had since been charged with several offences, including assault police, recklessly causing injury and hindering police.

Released on bail, he is due to front Melbourne Magistrates Court on April 14.

Police have also released images of 10 others wanted for questioning over offences, including incitement, assaulting police and damaging a police car after about 700 protesters made their way to Barkers Road in Kew during the mid-September march.

There, as demonstrator numbers began to dwindle, some protesters hurled projectiles and abuse at officers before surging through the police line as tensions rose. 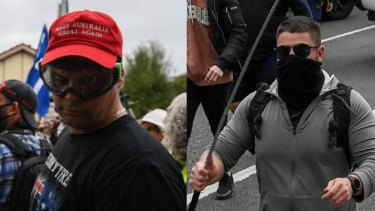 Police want to speak to the two men pictured above about allegations of incitement, affray and assaulting police.

Police said the seven men pictured below may also be able to assist with investigations. They said their investigation relates to incidents of alleged affray and assaulting police at the same Barker Road location in Kew in Melbourne’s inner east. 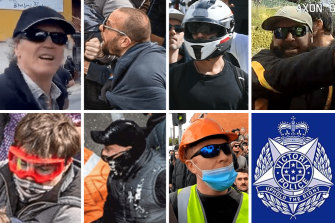 The seven men police wish to speak to over affray and police assaults.Credit:Victoria Police

Police also want to speak to the person pictured below following an affray and criminal damage to a police car. The man is pictured wearing a black cap, black jumper, dark-coloured sunglasses and an army print face cover pulled down around his neck. 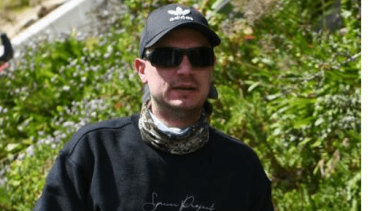 Do you know this man?Credit:Victoria Police

At the time of the protest, Victoria Police north-west region commander Mark Galliott said 235 demonstrators had been arrested and 193 fined after authorities used capsicum spray on groups of anti-lockdown protesters who broke through police lines.

Police had looked to thwart the planned anti-lockdown rally planned for the CBD, shutting down public transport in and out of the city centre on the day. 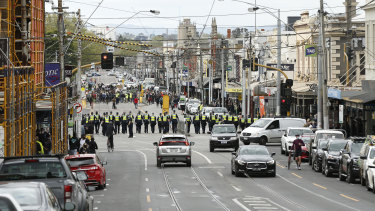 However, protesters gathered instead at Richmond before marching through Hawthorn and onto Barkers Road at Kew, where a number of demonstrators broke through a police line.

Police surrounded protesters again in a gorge on Victoria Street and used capsicum spray to turn them back.

An Age photographer was also sprayed at the scene.

About 2000 police were deployed as part of the operation to curb the protest.

Anyone with information is urged to contact Crime Stoppers on 1800 333 000 or visit crimestoppersvic.com.au. 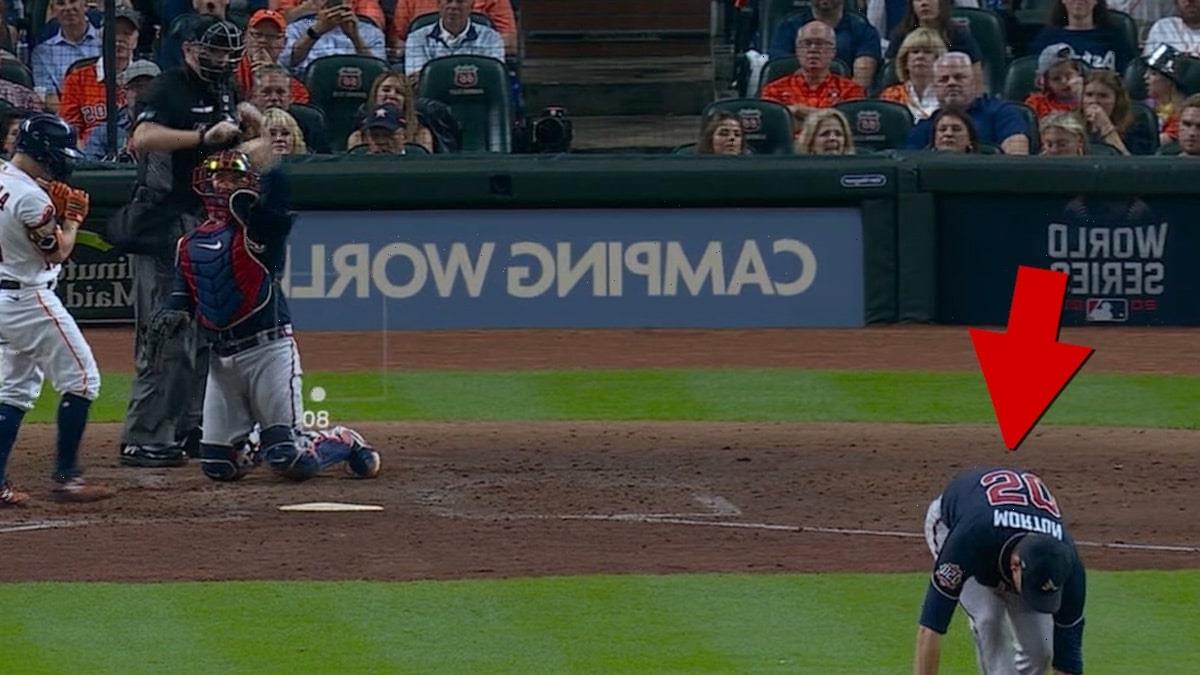