‘She spoke in Latin and objects flew around’: Irish man is cleared of assaulting his partner after claiming her injuries were caused by ‘poltergeist activity’ and ‘demonic forces’ that possessed her 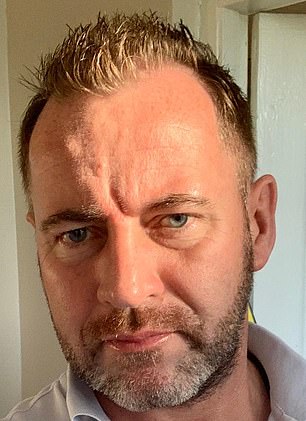 Shane Gibbons from Ogonelloe in east Clare, Ireland, was cleared of assaulting his ex-partner after he claimed she was possessed by demonic forces

A man who was cleared last month of assaulting his ex-partner has told the Irish Mail on Sunday how he suffered three years of ‘hell’ as a result of her being possessed by ‘demonic forces’ which he tried to rid her of through exorcism.

Shane Gibbons told how his girlfriend would go into a ‘trance-like state’ before ‘spouting Latin’.

Lights would turn on and off, items would fly off walls, and she would experience ‘horrible bruising and horrific looking scratch marks’.

‘I would witness poltergeist activity and this whole plethora of stuff,’ he said. ‘The bruising she was getting was horrible. When I wasn’t there it would escalate.

‘Some of the marks she got were horrific-looking marks, scratch marks and all of that.’

Mr Gibbons, who is aged in his 40s and from Ogonnelloe, near Scariff in east Clare, denied a charge of assault causing harm to the woman at his home on August 17, 2019, and decided to speak out after a judge dismissed the charge against him saying his ‘version of events concerning the occult, exorcisms and devilish possession should have been explored more by the State’.

Parish priest Father Donagh O’Meara, whom Mr Gibbons called for help at one point, told the MoS that although he is ‘reluctant’ to say the woman was possessed, Mr Gibbons is ‘not telling you a lie’.

Jane Donnelly, a healer from Kerry, told how she has ‘vivid memories’ of meeting Mr Gibbons and his then-girlfriend when she was in a ‘catatonic’ state. 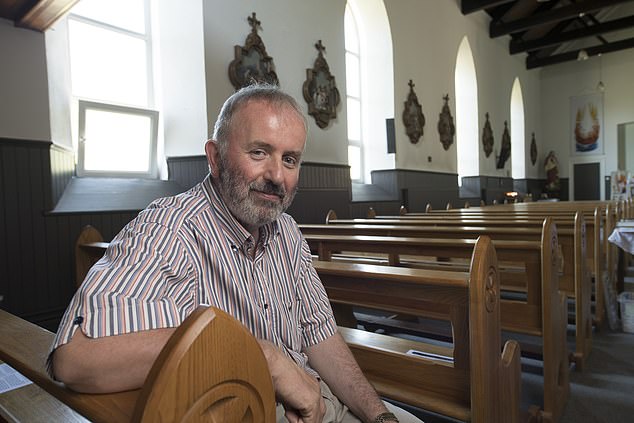 Parish priest Father Donagh O’Meara (pictured, whom Mr Gibbons called for help at one point, said that although he is ‘reluctant’ to say the woman was possessed, Mr Gibbons is ‘not telling you a lie’.

One of Ireland’s only exorcists has also spoken of how there is evidence from across Europe of a huge upsurge in demand for his type of work, but said although he had spoken to the couple briefly on the phone he had never met them and could therefore not make a diagnosis.

Mr Gibbons, a businessman and father of young children, told how he has been left traumatised because of his relationship with the woman and its aftermath, which resulted in his being brought before a court.

‘One thing I did learn from all this is that good and evil definitely exist,’ he said this week.

‘I’m a very practical guy, I would have kept this private. The only reason this has come to light is because of the court case.’ Mr Gibbons described what he saw, which he says clearly sets it apart from a mental health issue. 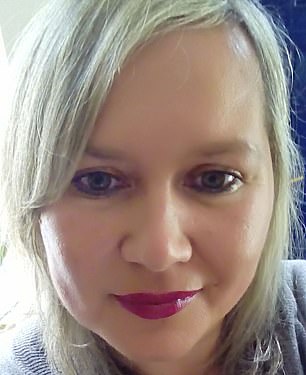 Healer Jane Donnelly (pictured), from Kerry, said she has ‘vivid memories’ of meeting Mr Gibbons and his then-girlfriend when she was in a ‘catatonic’ state

‘I’m sure lots of people will come up with their scientific explanation and mental health issues, and I actually think that both can exist at the same time, but there are far too many things that happened to her and to me that would account for her under something like her being psychologically traumatised or something.

‘I would have been that way of thinking myself but just too much happened, too many bizarre things happened.’

Those bizarre things included lights turning on and off, furniture flying off walls, his then-girlfriend going into trances and another voice taking over, which would sometimes speak in Latin.

‘Poltergeist activity basically… and this whole plethora of stuff,’ he said. ‘The bruising she was getting was horrible. When I wasn’t there it would escalate. Some of the marks she got were horrific-looking, scratch marks and all of that.

‘She wouldn’t remember what happened at all because she would have been in a trance state. Mental health and possession complement each other rather than contradict.

‘I think she did have mental health issues, but I think it stemmed from the possession.’

Mr Gibbons is eager that his ex-girlfriend’s identity be protected.

She is in her late 30s and is working. The woman was already experiencing problems when they met and they were together for three years.

As their problems worsened, Mr Gibbons said that out of sheer desperation he began to research what was happening and seek help.

First, he called Father Donagh O’Meara, who was the parish priest in nearby Killaloe at the time.

He later contacted a priest known as an exorcist who lives in Dublin. The couple then attended a healer in Kerry. Finally they sought treatment at a facility in the US.

Mr Gibbons drove her to Kerry to meet healer Jane Donnelly after Fr O’Meara and the other priest could not help in any meaningful way. He told how the dark force inside his girlfriend was ‘extremely annoyed’ at him for getting help.

‘He was extremely annoyed at me. He basically said I’m still here and can hide in the shadows and it got a lot worse from then on.’ Mr Gibbons told how his then-girl-friend became so desperate she travelled to a facility in Michigan for help.

‘There is a place in Michigan that is well funded and set up, with doctors and nurses. As soon as they saw her they knew immediately what was happening. They don’t want to talk about this either, they are very secretive and they won’t be impressed to see my name in the paper talking about them. 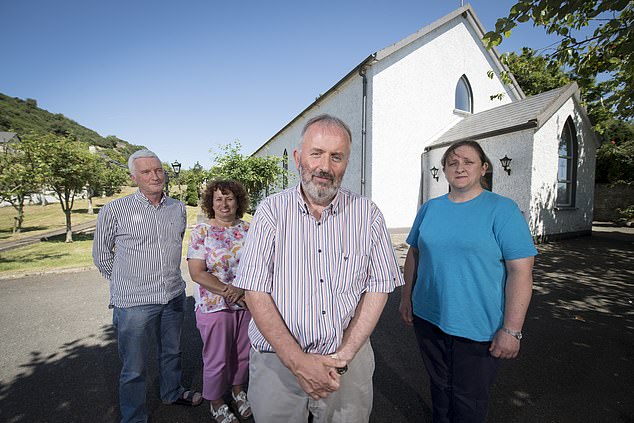 ‘She was better on her return and it was a lot more manageable than before.’

Mr Gibbons did not wish to give further details about the facility. He says everyone is ‘reluctant’ to talk about demonic possessions. ‘I think there’s a lot more that needs to be done in terms of this, but everyone is reluctant to talk about it. I mean it has impacted my life, even my work life.’

Although he and his then-partner are no longer together, Mr Gibbons says he was still receiving texts in Latin until he was forced to block her number.

‘You could meet her at work and you wouldn’t know. You might just think she is a bit quiet or something. When she was targeted, they [dark forces] would have been smart enough, they’d use her but use her smartly.

‘They didn’t tend to target her on a busy street or anything like that. After Michigan she was better and they did show her how to manage her ability.’ Despite the trauma, Mr Gibbons admits that he is as mystified by what happened to him and his former girlfriend as most people.

‘This has been a big shock to my family and people who know me. It is affecting my work, I work in healthcare and you need credibility. Some understand and some don’t understand at all.’ Father O’Meara, who is now based in west Clare, told the MoS he can verify Mr Gibbons’s character. 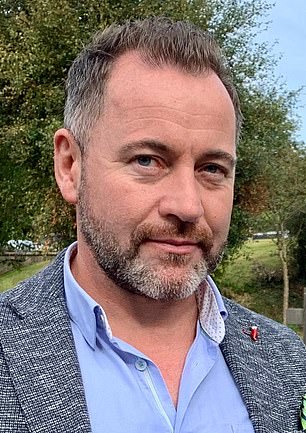 He was reluctant to speak on the record, but did confirm he had met the woman and that ‘there was certainly something there with her’.

Healer Jane Donnelly described the moment Shane and his girlfriend arrived into her shop in Kerry. ‘I do remember. She was just completely like catatonic, like out of it completely and shaking and he had to hold her to bring her in. She was possessed by this evil spirit, which I was able to remove from her. I remember it so well because I’d never encountered that level of possession.

‘I’ve seen demons and different things, but that level of possession I have only seen in the movies to be honest. I was able to help her and I was able to remove it and she went home and was good for a good number of months before it came at her again.

‘There are a lot of people who are suffering with this on different levels, not as bad as this usually. When she left that day she was beautiful, she was lovely, she was normal. It is scary and it is annoying priests can wash it off as something that happened in the 1950s and not today.’

Ms Donnelly told how Mr Gibbons was trying everything he could think of to help his girlfriend. ‘He was going through hell with her and he tried [everywhere for help]. I personally felt she kept inviting this energy back to her.

‘For some few individuals it might need to be cleared more than once, but for her there was no clearing her, it just kept coming back worse and worse. When she came in that day it was like she was in a trance.’

The exorcist working in Ireland, who did not want to be named, told how the normal method of diagnosing a person was to spend time with them to see if there is something ‘untoward happening’ which is ‘more than psychological’. 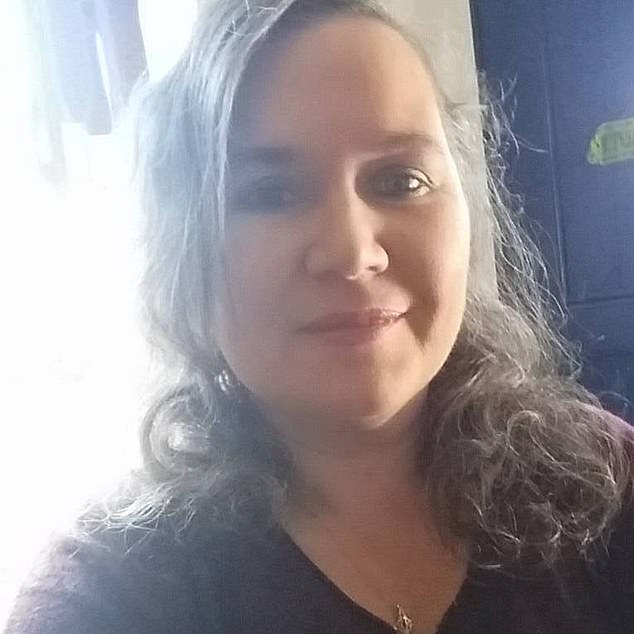 Healer Jane Donnelly described Mr Gibbons’s ex partner as ‘completely like catatonic, like out of it completely and shaking and he had to hold her to bring her in’

‘If there is something, how did it make an entry into someone’s life? I never got that far with either of them, what we had were conversations over the phone and never coming to a conclusion about what was happening,’ he said.

The exorcist says he receives an ‘inordinate’ number of calls because there are so few people in the country able to help with possession. ‘There is evidence coming in from all over Europe that there is a huge increase in demand for this type of ‘I felt she kept inviting this energy back to her’ ministry. You could hypothesise that as people drift away from religion they are trying other things that are dubious and dangerous.’ After an incident in which the woman alleged Mr Gibbons pinned her to a bed and shook her for a long time, and in which she suffered bruises to her body, wrists and neck, the woman called gardaí.

In dismissing the charge of assault, Judge Patrick Durcan said Mr Gibbons’s version of events concerning the occult, exorcisms and devilish possession should have been explored more by the State.

The judge also noted that the complainant remained silent when questioned about previous unexplained injuries, which she had allowed Mr Gibbons to take photographs of.

Solicitor for Mr Gibbons, Daragh Hassett, read out a text sent by the complainant in the past to Mr Gibbons which read: ‘I am so glad. I knew I needed the exorcism.’ Under cross-examination from Mr Hassett, the woman denied she was possessed by demons. When asked to comment on the text message, she told the court that what took place was not an exorcism.

Garda Darren McLoughlin told the court when gardaí arrived at the home, the complainant was in a very distressed state. She allowed gardaí to take photos of the bruising and they were shown in court.

Asked by Judge Durcan to comment on a video of Mr Gibbons ‘exorcising’ the woman in 2016, Garda McLoughlin stated: ‘There is something there when viewing the video. It is very, very strange and you do see her scraping herself.’ Asked if he accepted the woman had ‘been the subject to possession by a demonic force’, Garda McLoughlin said he ‘wouldn’t believe in that stuff but it is a very strange case’.