Man jailed for seven months after killing businessman on a motorcycle

Czech national, 27, is jailed for seven months after killing businessman on a motorcycle by pulling into his path without checking his mirrors then fleeing country in stolen £8,000 car

A driver who killed a motorcyclist because he failed to look at his mirrors has been jailed for seven months.

Zdenek Pulko, 27, who failed to look in his wing mirrors as he pulled out into the path of Ian Stewart, 63, fled to the Czech Republic in an £8,000 car he had not paid for following the fatal collision near Sherburn-in-Elmet, North Yorkshire.

The Czech national was tracked down and extradited under a European arrest warrant back to Manchester Airport where he was arrested, York Crown Court heard.

Police investigators concluded the motorcyclist, Mr Stewart, a grandfather and father of two, from Wakefield, West Yorkshire, would have been in view for a mile in Pulko’s rear mirror before the crash.

Zdenek Pulko (pictured), 27, failed to look in his wing mirrors as he pulled out into the path of Ian Stewart, 63, on October 2018

The collision happened on Coldhill Lane, on the outskirts of Sherburn-in-Elmet, North Yorkshire, at around 1.45pm, October 18, 2018.

Mr Stewart, who was an experienced motorcyclist, died at Leeds General Infirmary on the night of October 19, 2018, when his life support machine was switched off.

Pulko had been driving a beige Skoda Octavia towards Sherburn when he crashed into Mr Stewart who was riding a blue and white BMW motorcycle in the same direction.

His widow Fiona told the court: ‘I will never forget the car driver for taking my husband from me.’

The couple, who had been married for 32 years and had run a business together, had returned from safari in Africa 12 days before Mr Stewart’s death.

Pulko, of no fixed address, pleaded guilty to causing death by careless driving and the theft of a car he bought on credit on November 8. He did not pay any instalments.

He was jailed for seven months and banned from driving for 15 months.

He had left the UK because his grandmother was ill and because he had lost his UK job.

He was planning to return when he was extradited and regretted causing Mr Stewart’s death. 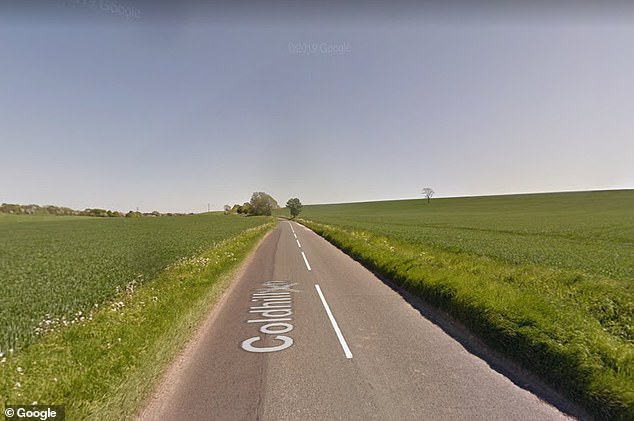 Prosecutor James Bourne-Arton said Mr Stewart was a very experienced motorcyclist and had been riding correctly.

He was on his way to meet a friend at Squires Cafe near Sherburn-in-Elmet.

He had indicated to overtake in a safe place and was overtaking, when Pulko, travelling at 50mph, moved out.

Pulko told police he was avoiding a pothole but police said there were none in the road.

The two vehicles collided in the opposite lane and the motorbike skidded over the far verge and into a tree.