A Manchester United fan has got the sack on his first day after taking a selfie with Man City star Riyad Mahrez – breaking COVID-19 social distancing restrictions by getting within two metres of the player.

Groundworker Craig Willis, 37, said he was shown the red card by bosses after asking the star for a photo – within hours of starting.

Mr WIllis had been hired by an agency to look after paving at a luxury apartment complex near Macclesfield in Cheshire.

But he failed to follow strict measures to keep his distance from other people under coronavirus rules. Craig Willis, 37, said he was shown the red card by bosses within hours of starting his new job after asking the Manchester City star for a photo, breaking the two metre social distancing rule

The dad-of-five said he spotted the pacy Algerian winger, 29, while he was being shown around the work site and approached him for a snap.

Mr Willis said: ‘Mahrez seemed pretty cool with it. I asked and he said: ‘Yes, no problem’.

‘I had the photo, had a fist bump – then got the call on the way home.’

But Mr Willis said he was called by his supervisor while on the way home on Monday and told not to return the next day.

His employer reminded him he had signed a form which made it clear that getting within two metres of anyone on the site was cause for instant dismissal.

The football fan was taking the snap for his friend who supported Mahrez’s team.

‘I took the selfie for my best mate – he’s a Manchester City fan. I support Manchester United. But it’s not everyday you see someone like that.’

Mr Willis said he returned to the site the following day to pick up his tools – when his sacking was confirmed. 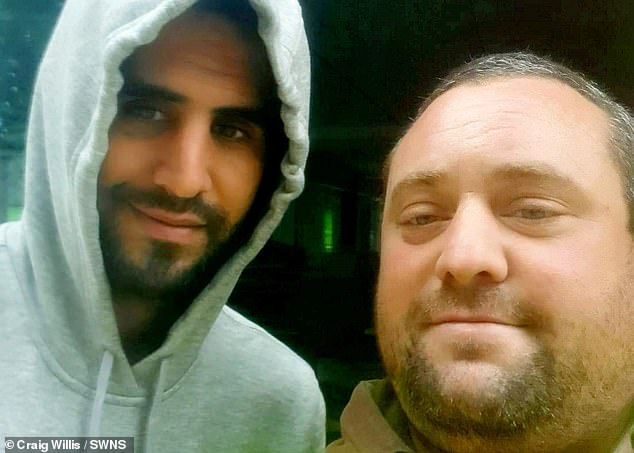 Mr Willis was called by his supervisor on Monday and told not to return the next day. His employer reminded him he had signed a form which made it clear that getting within two metres of anyone on the site was cause for instant dismissal

He called his sacking ‘a bit out of order’ but admitted he had broken the rules, claiming they were not explained to him properly in the first place.

‘If I’ve signed something then fair enough. You can’t tell lies. I didn’t think about it.

‘I’ve broken the rules. But it wasn’t explained properly. That’s the only thing I can say about it.

‘And I did ask him. I was working and he walked past. I said: ‘Are you alright for a photo?’. He then came towards me.’

Mr Willis was contracted to work for Pavetec. A spokesman for the company declined to comment.

A spokeswoman for the PJ Livesey Group, who is developing the Macclesfield site, said: ‘The safety and security of everyone on our sites is of paramount importance at all times and the rules on this are very clear.’

There is no suggestion that Mahrez complained or was involved in the decision.