Arson detectives are investigating the cause of a house fire after a man’s body was found during a blaze in a Melbourne bayside suburb on Monday night.

Police and firefighters attended a home in Ardoyne Street in Black Rock, 20 kilometres south-east of Melbourne’s CBD, shortly after 9.30pm following reports of flames inside the property. 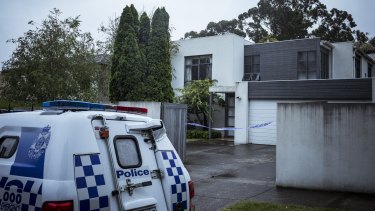 The property on Ardoyne Street, where the man’s body was found.Credit:Chris Hopkins

A deceased man was found inside the home by emergency services before the fire was fully extinguished. He is yet to be formally identified.

A Fire Rescue Victoria spokesman said it took eight firefighters less than half an hour to get the flames under control. The fire was contained to just one room, he said.

An arson chemist will attend the Black Rock property on Tuesday morning to determine the circumstances of the fire. The cause of the blaze is still unknown and police are have set up a crime scene while evidence is processed.

Police will prepare a report for the Coroner.