This is the moment three raiders armed with a meat cleaver, knife and baseball bat stormed into a jewellery shop and terrified staff before making off with £200,000 worth of designer watches.

Shocking CCTV shows the gang smashing glass cabinets as they plundered high-end watches from Elite HNW Boutique in Beaconsfield, Buckinghamshire, at 10.15am yesterday.

The masked men leapt out of a grey Audi with the partial registration of GK15 as their driver waited for them, before using a metal hydrant cover to smash the lower panel of the shop door and force their way inside.

A second video filmed in the street outside shows the men scarpering back into their vehicle as it speeds off in front of stunned bystanders. 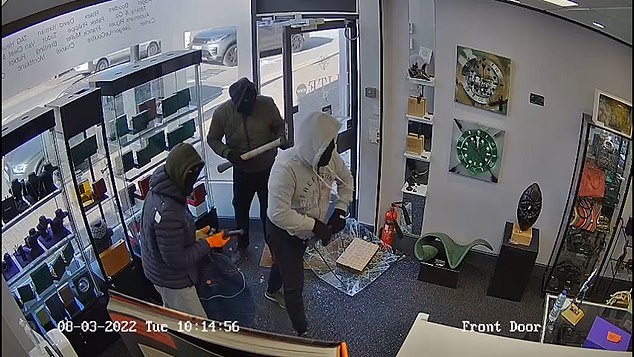 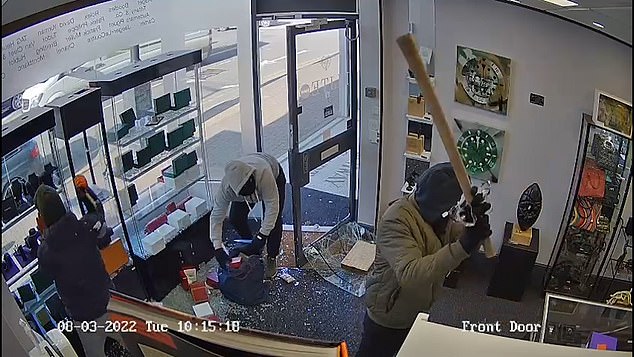 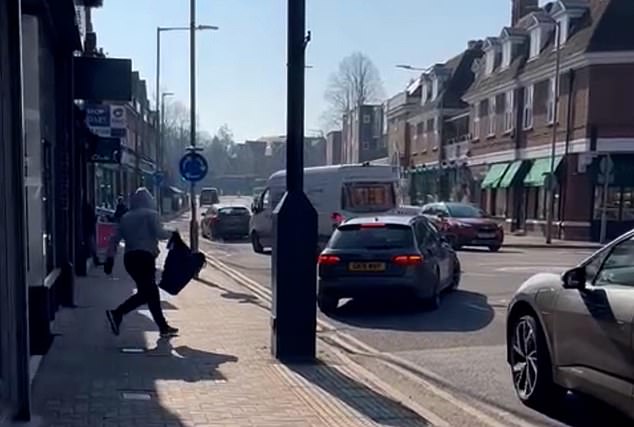 The boutique’s owner Max Thorne, 54, was in the store with two other staff members and attempted to confront the thieves but was threatened with a blade just inches from his face.

Mr Thorne said: ‘They went straight for the cabinets and smashed the glass with a baseball bat and a hammer.

‘The third man made an attacking motion with a knife to staff at the back of the shop. There was a lot of screaming from him, he was shouting ‘get down’ and ‘get out’.

‘I went forward with a view to approach him but I was met with what looked like a machete pointed in my face and thought better of it. It was absolutely terrifying.

‘The staff were amazing. They stayed calm even though they were obviously very shaken afterwards.

‘We were very grateful to get away. Later when the police came, I’ll admit I’ve never seen so many armed response vehicles and helicopters.’

Luckily, no one was injured in the incident.

Officers later found the discarded jewellery at a nearby bus stop on the A40 a short time later. 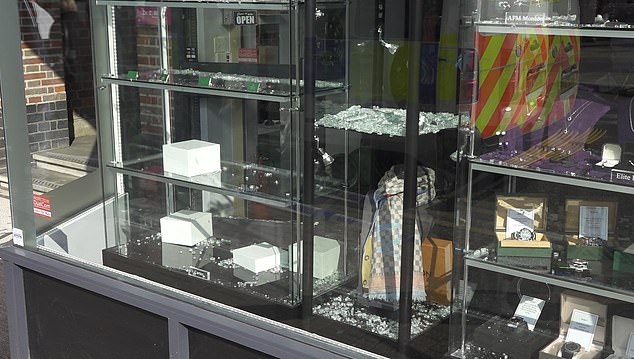 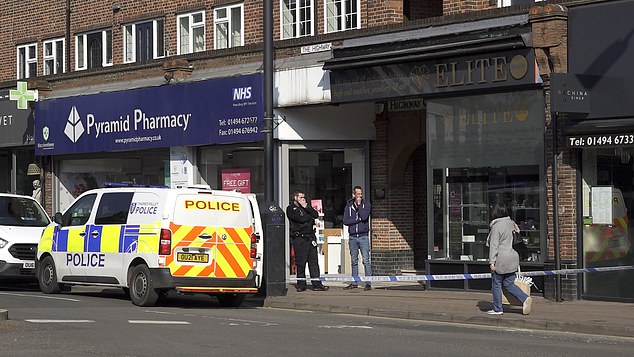 Mr Thorne added: ‘We’ve had so many lovely messages from the community, even people saying they didn’t know our shop was here they want to support us.

‘We’ve lost a lot of stock but there’s more on its way. We won’t be defined by people like this and we will be increasing our security – we’re working with police on that.’

Detective Constable Mark Banham, based at Amersham police station, said: ‘We are appealing for witnesses at two places in relation to this incident.

‘Firstly, at the jewellery store and then also anyone that witnessed the offenders discarding the jewellery at the bus stop a short time later.

‘I am particularly keen to speak to anyone that has dash-cam footage from Burkes Road and was in the area between 10.15am and 10.30am today.