THE investigation into Rep. Matt Gaetz was reportedly prompted by a bombshell text from a "Sugar Daddy" tax collector who made fake IDs.

Gaetz, a Republican of Florida, is being investigated by the Justice Department over whether he had a sexual relationship with a 17-year-old and paid for her travel, according to reports. 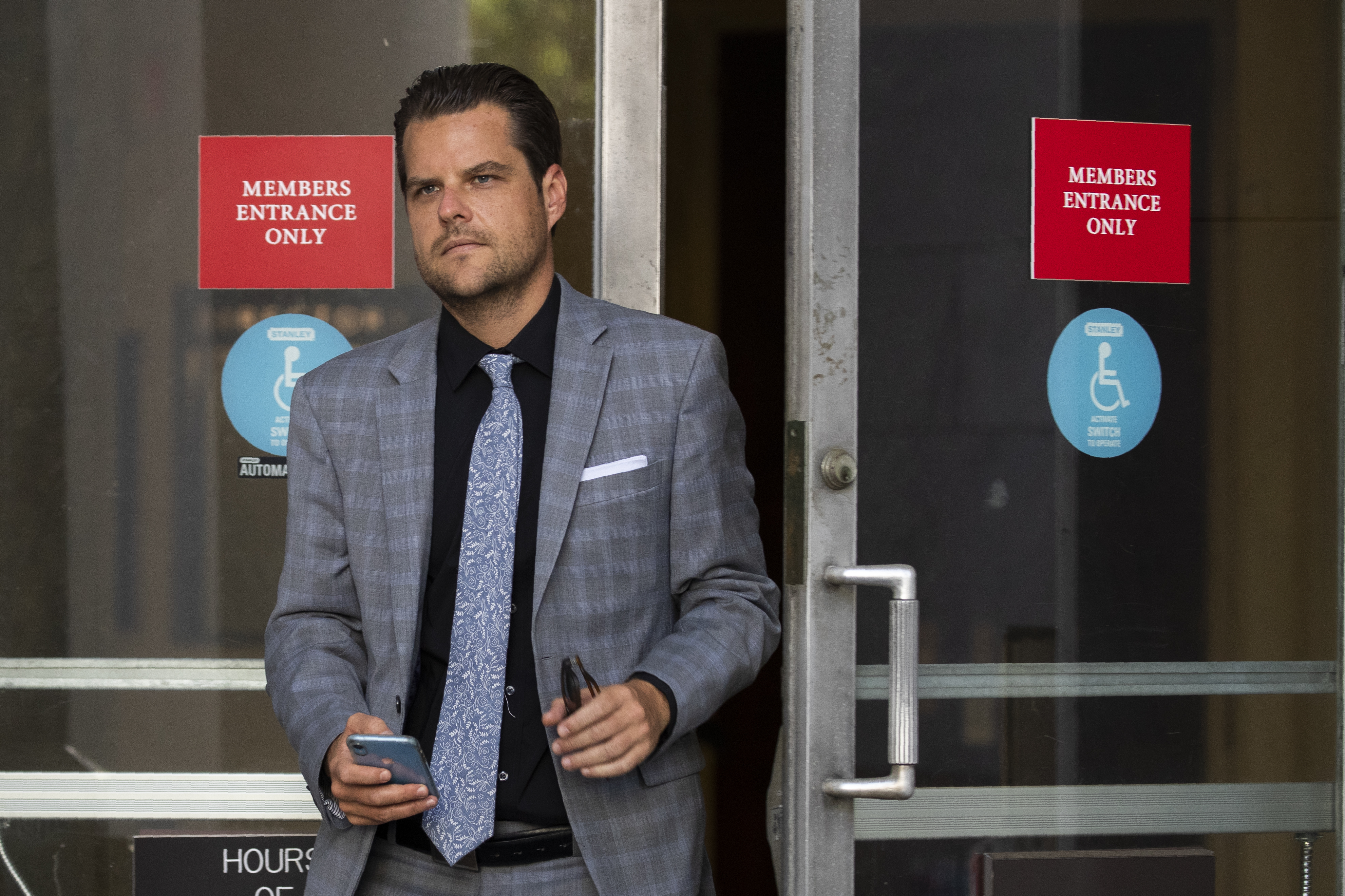 Investigators are examining whether Gaetz, 38, who was an ally to former President Donald Trump, violated sex trafficking laws, The New York Times reported.

The Times, citing people briefed on the matter, said the investigation into Gaetz's possible actions was opened in the final months of the Trump administration under Attorney General William Barr.

Gaetz told The Hill today he has no plans to step down and rumors of his resignation are "false" and it is "very safe" to say he does not intend to quit.

Sources said the investigation of Gaetz is part of a broader probe into Joel Greenberg – a political ally of Gaetz who has resigned from his role as a tax collector in Seminole County.

Last year, Greenberg was indicted on an array of charges, which included sex trafficking of a child and financially supporting people in exchange for sex.

Greenberg pleaded not guilty last year but he was jailed this month for violating the terms of his bail.

Sources have now told The Daily Beast that investigators received a tip that Gaetz accompanied Greenberg on a peculiar nighttime visit to a government office – where the official was allegedly making fake IDs.

The US Secret Service received the tip in the form of a text message which explained why Greenberg was allegedly in the office with Gaetz. 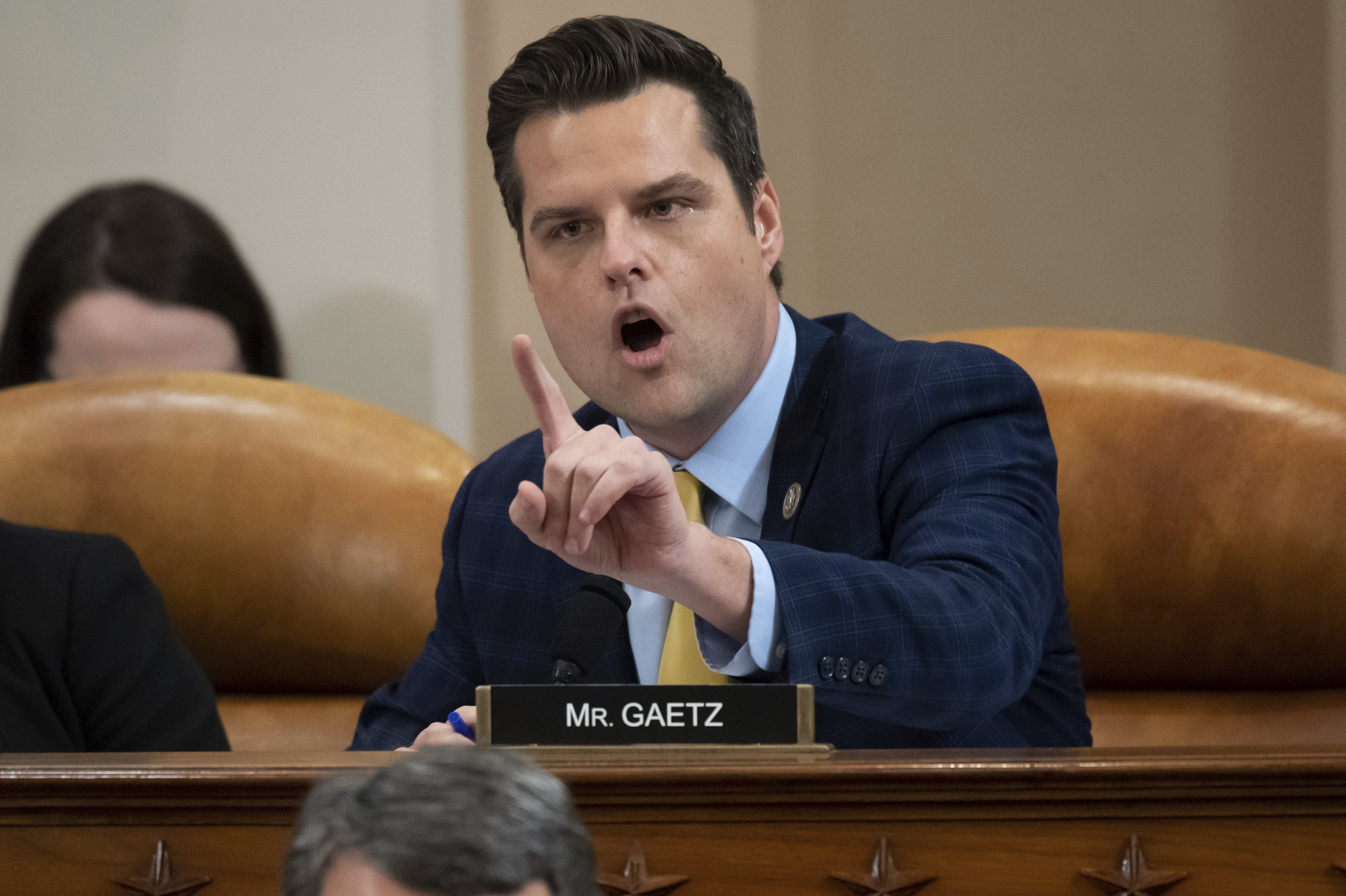 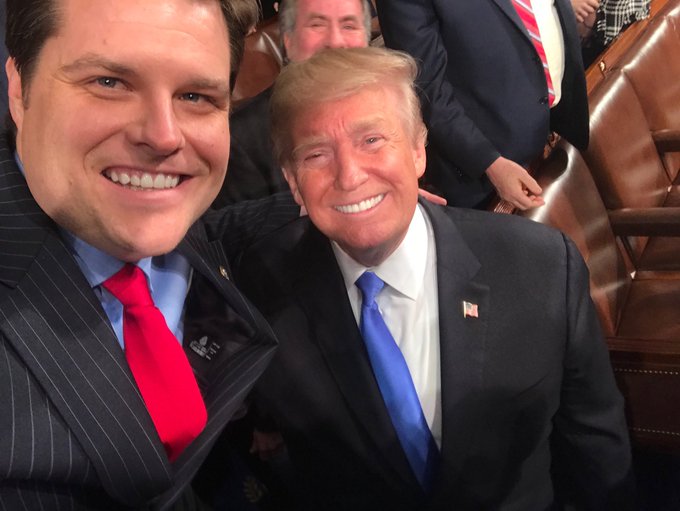 A timestamp on the text message thread, seen by The Daily Beast, shows the conversation took place on Monday, April 16, 2018.

"Did you happen to visit the Lake Mary Office on the weekend?" the text message read.

Greenberg allegedly responded: "Yes I was showing congressman Gaetz what our operation looked like. Did I leave something on?"

When agents later started investigating Greenberg for identity theft and stalking, officers spoke to former employees at the tax office to find proof of the public official's activities, according to reports.

And that’s when they were directed to Gaetz.

Greenberg has been accused of using his access to Florida’s driver license database to look up private information on "individuals" and "engage in ‘sugar-daddy’ relationships".

He has maintained a close relationship with Gaetz for several years – a photograph on Twitter from 2019 shows Greenberg visiting the White House with Gaetz.

No charges have been brought against Gaetz in the sex-trafficking probe, and it was not reported how the representative met the girl, who is believed to have been 17 at the time of the encounter, around two years ago. 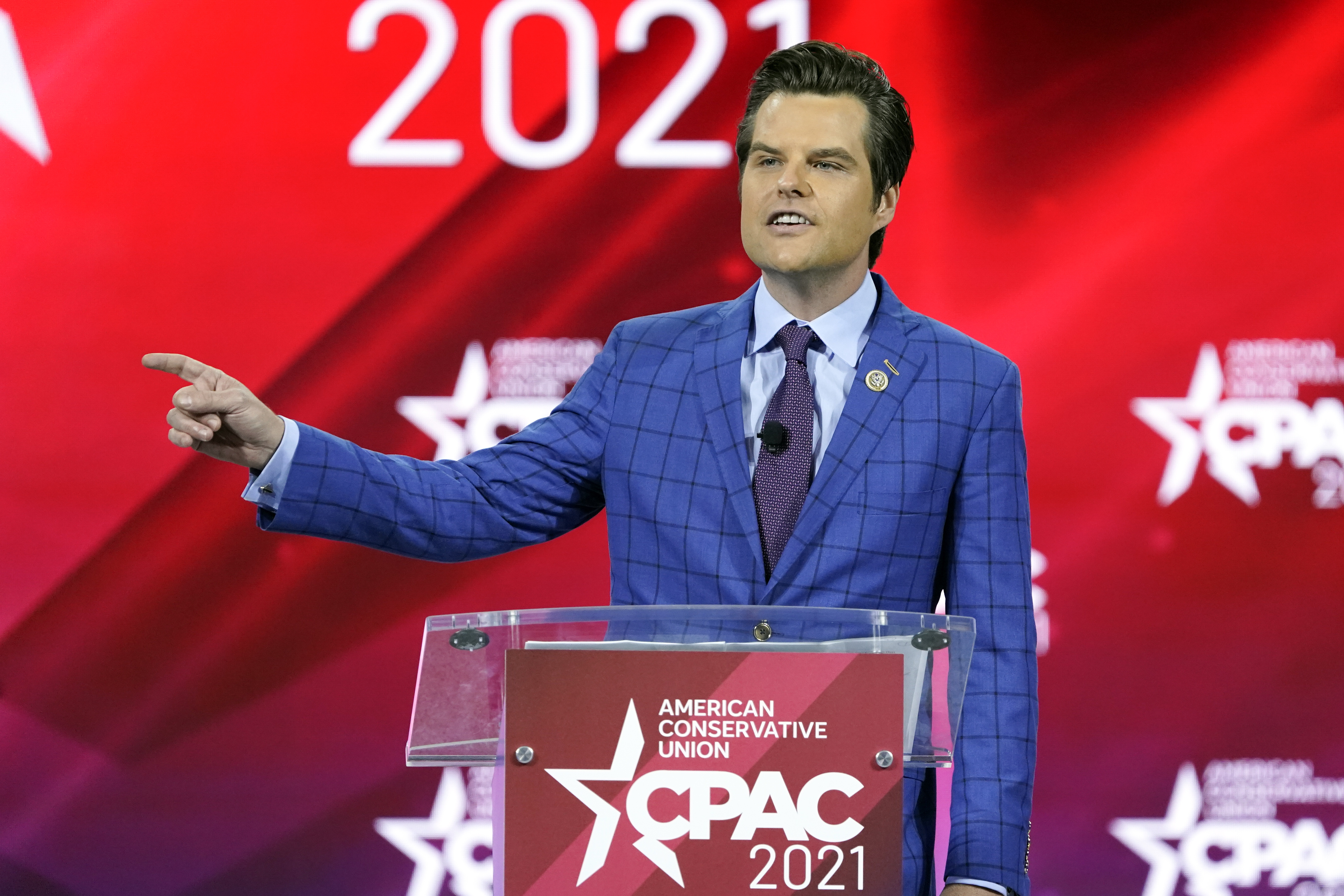 According to the Times, a number of federal statutes make it illegal to induce someone under the age of 18 to travel across state lines in order to engage in sex in exchange for money or something of value.

He told CNN that Congress would not open such an intense and "substantial" investigation unless there was a "a significant degree of information".

"It's substantial and very serious," he said, according to Newsweek.

"You know [after] 21 years of opening and overseeing, conducting investigations, I can tell you that nobody opens a sex trafficking investigation in which the subject is a sitting member of Congress without having a significant degree of information."

"In any case, I can assure you the FBI doesn't open these cases lightly, and don't get briefed to the attorney general without some significant momentum behind them," he later added.

Speaking to Fox News' Tucker Carlson on Tuesday evening, Gaetz denied the allegations, claiming that his family was being extorted by an ex-DOJ official. 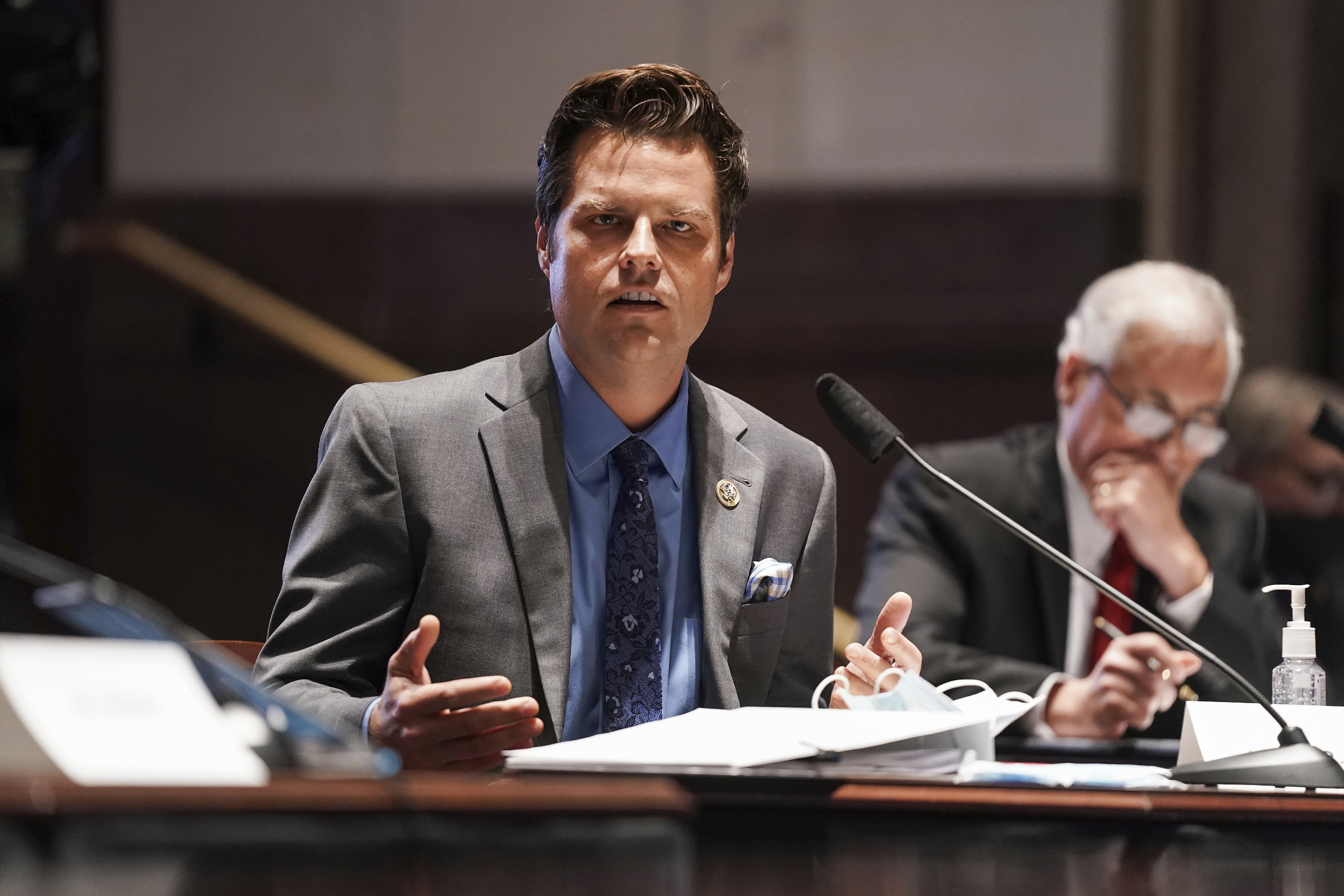 In a statement released on Twitter, Gaetz said: "Over the past several weeks my family and I have been victims of an organized criminal extortion involving a former DOJ official seeking $25 million while threatening to smear my name.

"We have been cooperating with federal authorities in this matter and my father has even been wearing a wire at the FBI’s direction to catch these criminals.

"The planted leak to the New York Times tonight was intended to thwart that investigation.

"No part of the allegations against me are true, and the people pushing these lies are targets of the ongoing extortion investigation.

"I demand the DOJ immediately release the tapes, made at their direction, which implicate their former colleague in crimes against me based on false allegations."

It's since emerged that former AG William Barr and Department of Justice officials were reportedly briefed "multiple times" about the alleged sex-trafficking scandal.

Sources told Politico that Barr did not take issue with the accusations after being alerted to the investigation in the summer of 2020, however.

Following the Times report, Gaetz said in a phone interview with Axios: "The allegations against me are as searing as they are false. I believe that there are people at the Department of Justice who are trying to criminalize my sexual conduct, you know when I was a single guy."

Asked what the charges could relate to, Gaetz said: "I have definitely, in my single days, provided for women I've dated.

"You know, I've paid for flights, for hotel rooms. I’ve been, you know, generous as a partner. I think someone is trying to make that look criminal when it is not."

Gaetz – who is engaged – has gained nationwide attention in the past, having appeared in a number of television interviews supporting Trump.

He also proposed to his girlfriend, Ginger Luckey, at Trump's Mar-a-Lago club in Florida on December 30.

Last summer, Gaetz also announced that he had an adult son, Nestor Galban, 19 – though Gaetz said that he is not Galban's biological father and has not formally adopted him.

Galban reportedly came to the United States from Cuba and was 12 when they met.

At the time, Gaetz was dating Galban's sister.