May offers 'confirmatory referendum' on her Brexit deal

May says if her deal is approved by parliament, politicians may then hold vote on putting deal to British public. 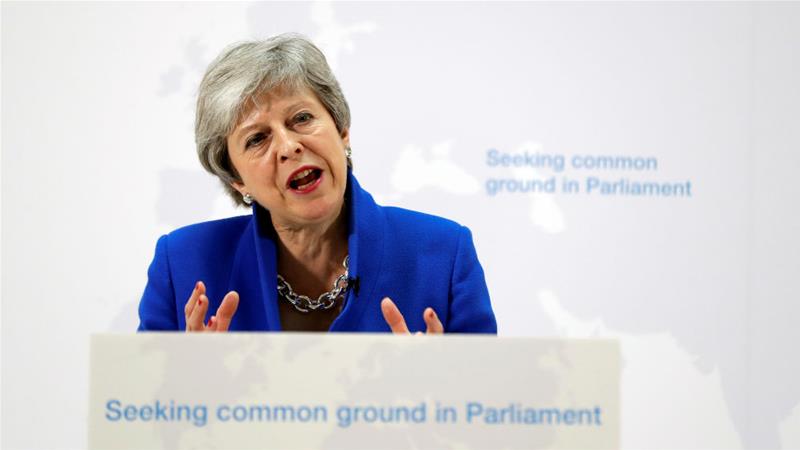 British Prime Minister Theresa May says she has “compromised” ahead of a last-ditch effort to get her Brexit deal approved by parliament.

On Tuesday, May attempted to win over opposition by offering the House of Commons a vote on whether to hold a confirmatory referendum on her Withdrawal Agreement – if it is pushed through parliament.

“I say with conviction to every MP of every party: I have compromised, now I ask you to compromise,” she said.

The holding of any fresh referendum for the British public would take a good deal of parliamentary wrangling to establish exactly what question should be asked, but a confirmatory vote would essentially be a choice between May’s deal and the cancellation of Brexit altogether.

“It’s her absolutely last throw of the dice to get her deal through and secure her legacy before she steps down,” said Al Jazeera’s Laurence Lee, reporting from London.

May’s deal has faced opposition on several fronts. Hardliners in her own Conservative party believe it doesn’t go far enough, leaving Britain part of several European institutions and structures such as the Customs Union.

And Labour, the principal opposition party, while politically committed to leaving the EU, also opposes the deal over issues of workers’ rights and those of EU nationals living in Britain and British nationals living within the EU.

Following May’s announcement on Tuesday afternoon, Labour leader Jeremy Corbyn said his party could not support the new Brexit Bill, saying it did not offer any significant change and was only offering a temporary customs union, not a permanent customs union, “which is what we want”.

May has said she has compromised on ten key points, but Al Jazeera’s Laurence Lee says most of the “concessions” were already known, and the only new offer was that of the confirmatory referendum.

“Will it work? Probably not,” he said. “Her half-in, half-out approach has appeased no-one at all. Her final throw of the dice will more likely be a one than a six.”

Opposition to May’s proposed referendum has been swift.

On the right, David Davis, a former Brexit minister, said he would not vote to approve the Withdrawal Agreement, because it risked a second referendum. Jacob Rees-Mogg, the ringleader of the most ardent Conservative Brexiteers, told The Daily Telegraph he “wouldn’t put money on my backing the deal”.

On the left, Labour’s Wes Streeting tweeted: “Lots of us have been very clear that the PM’s deal can pass on the condition that the people get to decide through a referendum. That’s not what the PM is promising I’m afraid.”

Reuters reported a DUP spokesperson saying: “We will have to await the publication of the text of the Brexit Bill to see what the proposals actually mean, but the fact is that the fatal flaws of the draft treaty remain.”

The prime minister’s spokesman told reporters that “dialogue continues” with the DUP and other groups in parliament. Six weeks of negotiations between May’s administration and Labour proved largely fruitless and collapsed last week, with the opposition stating that, with May having agreed to set out her departure timetable and Cabinet ministers already jockeying for position to replace her, there was no guarantee that the next administration would uphold any agreement made now.