The Duchess of Sussex smiled at him as he delivered a speech on Wednesday morning in a drought hit farm that had been praying for rain. 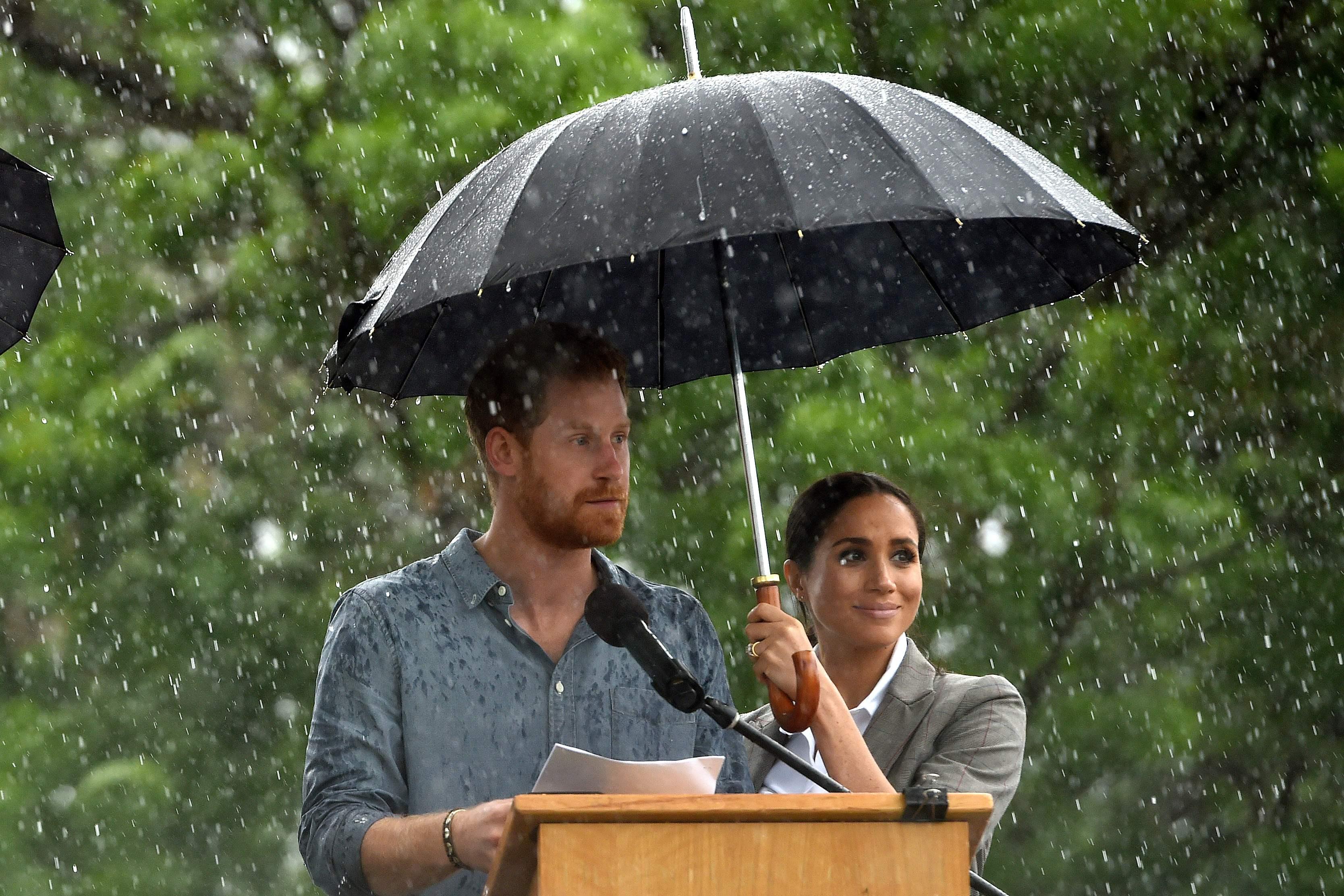 The Prince told the cheering crowd: "It's alright, I've got my wife" as the heavens opened.

He laughed and stumbled over his words as the showers got heavier as he spoke, soaking his blue shirt.

An emotional speech addressed his own battles with mental health after the death of his mother Princess Diana, and paid tribute to "salt of the earth" Australian people.

Pregnant Meghan earlier told the farm community that she was "running on adrenaline" during the extensive tour of Down Under. 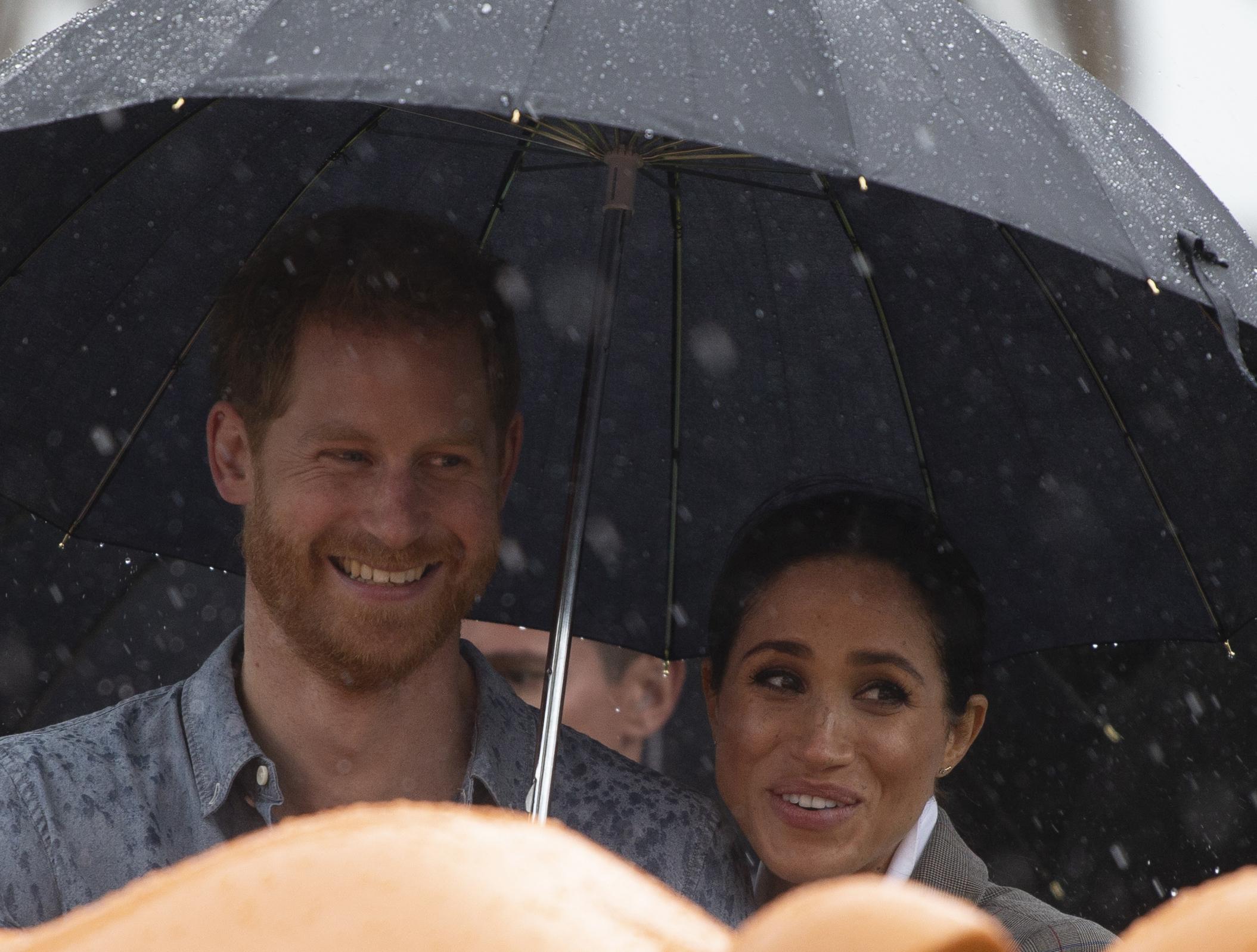 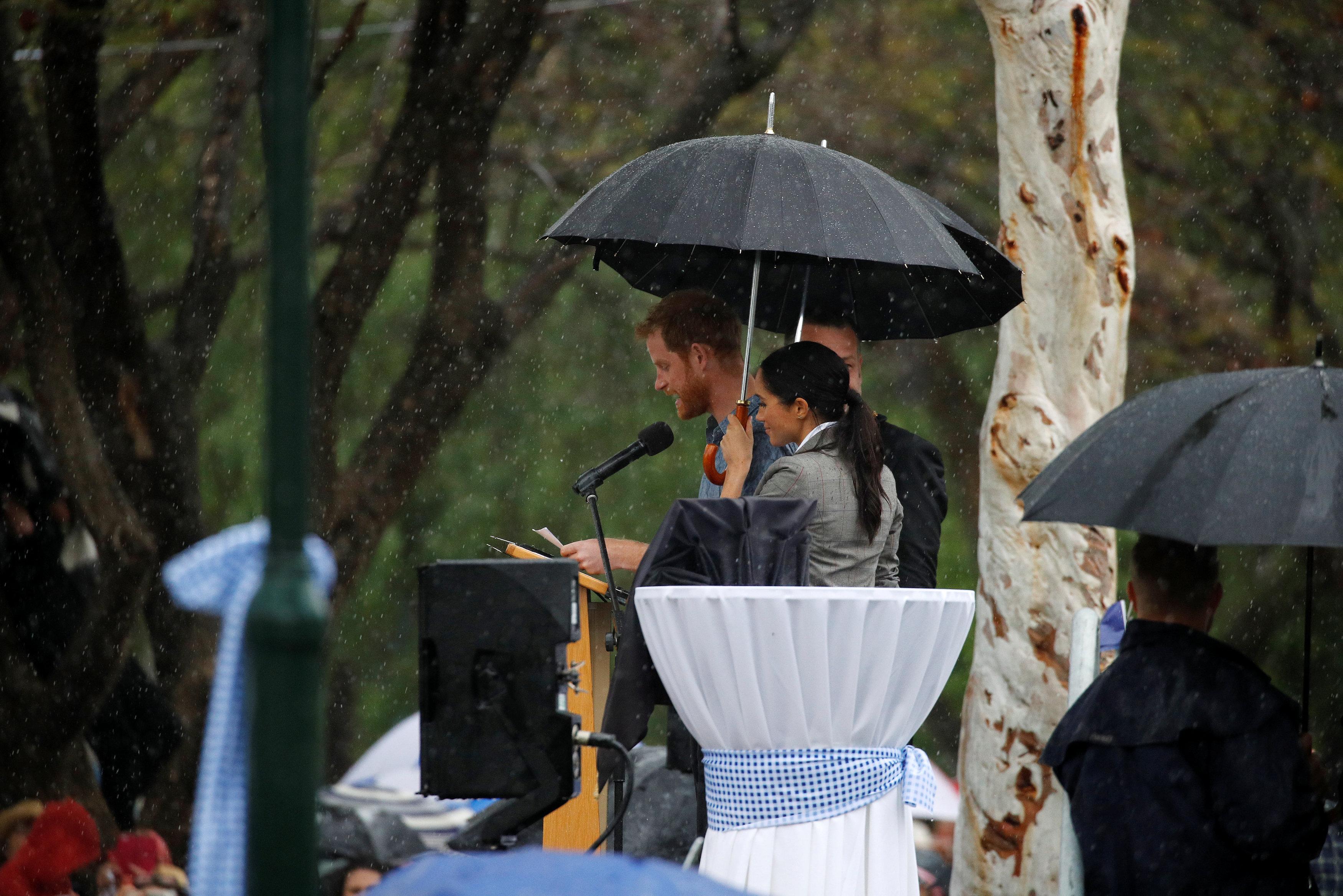 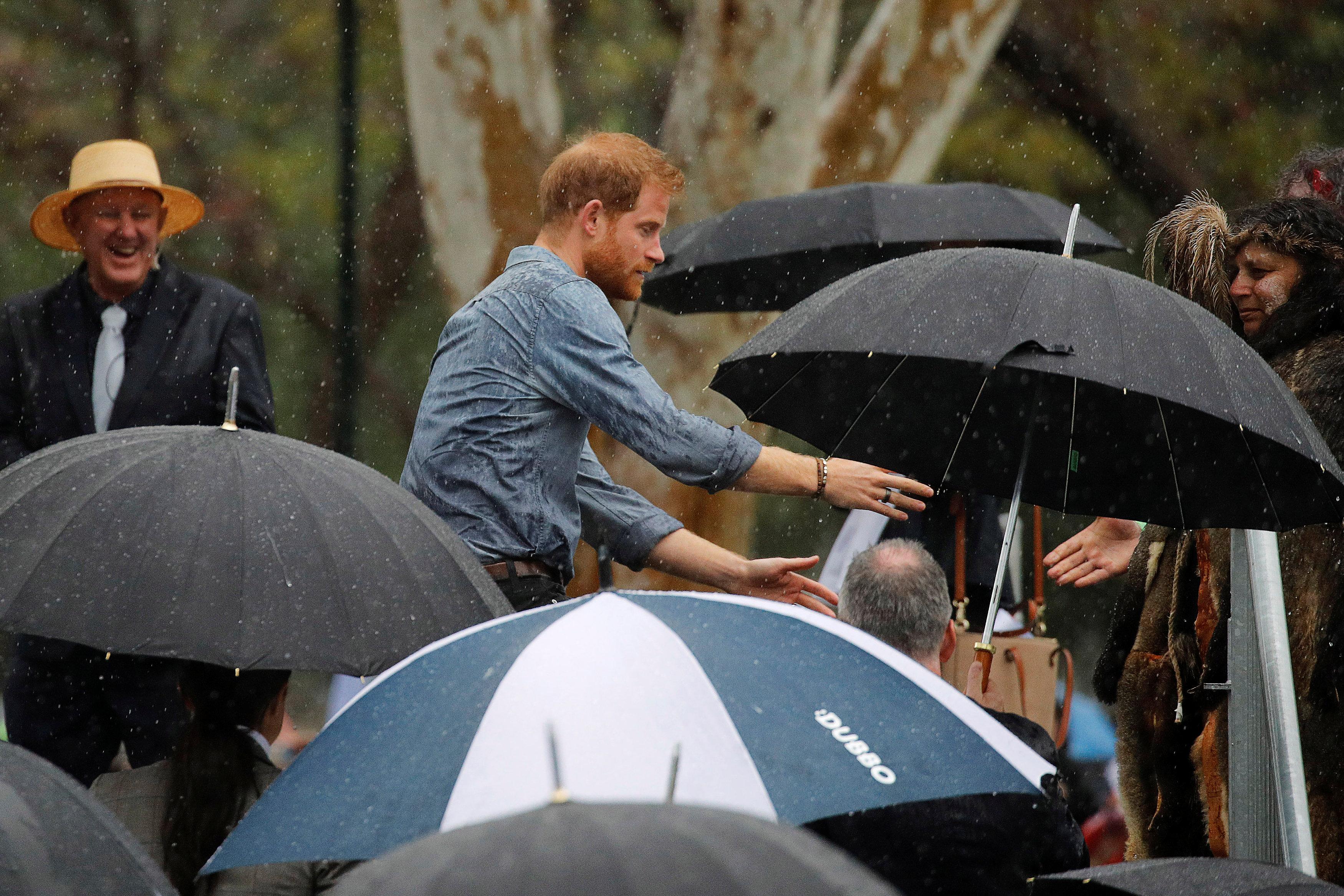 Harry told the crowd: "Honest, hard working and tough as they come and that resilience, sense of humour and commitment to the land are the qualities that make you unique."

Harry added: "We are all in this together. Asking for help was one of the best decisions I ever made."

Meghan smiled supportively as he spoke to the elated crowd.

The pair were visiting drought-hit farms in Victoria Park, Dubbo.

He told the rural community: "I know that life has not been easy.

"It must be hard not to lose hope when you endure so many dry months knowing you are powerless to do anything about it." 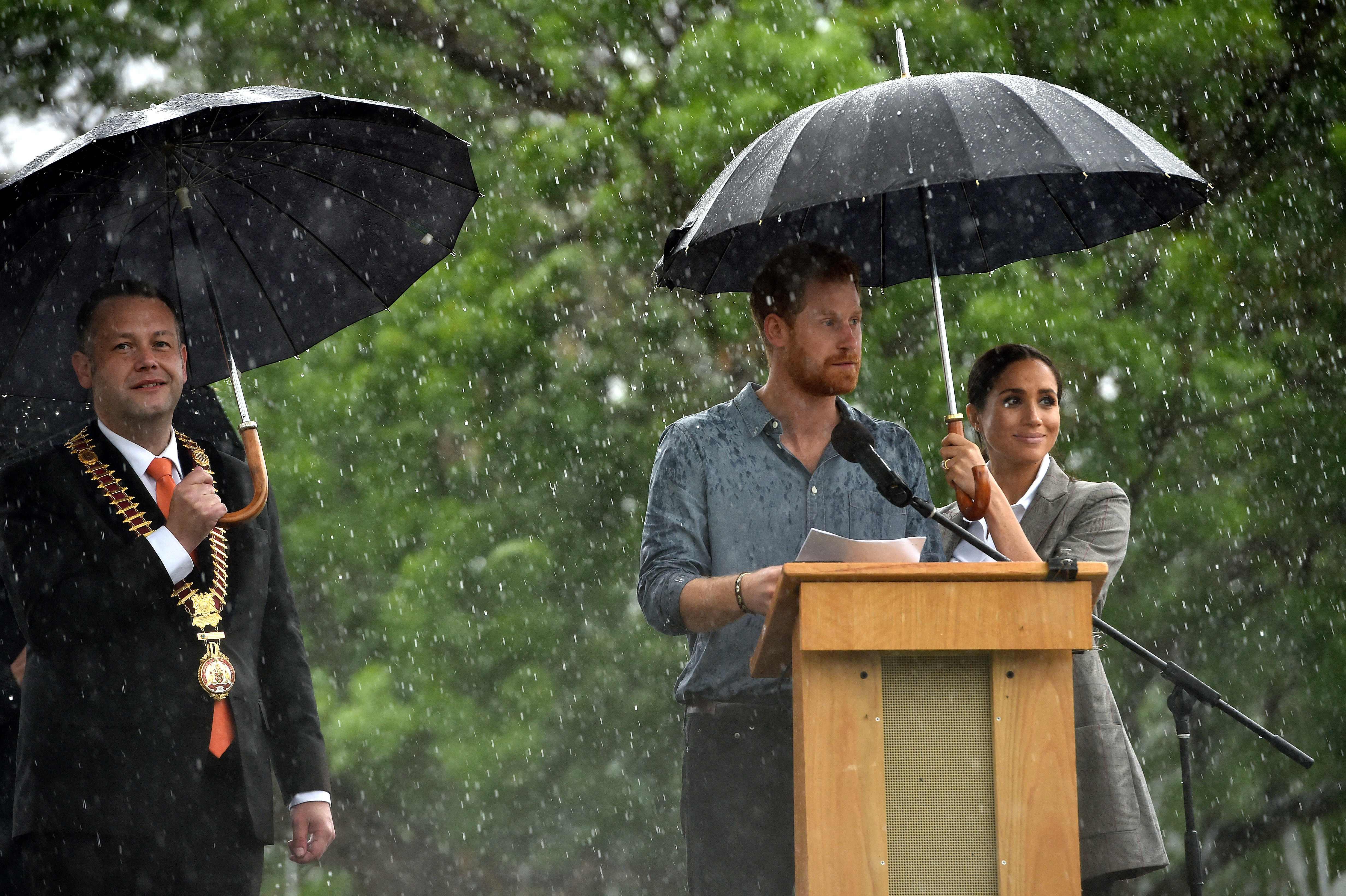 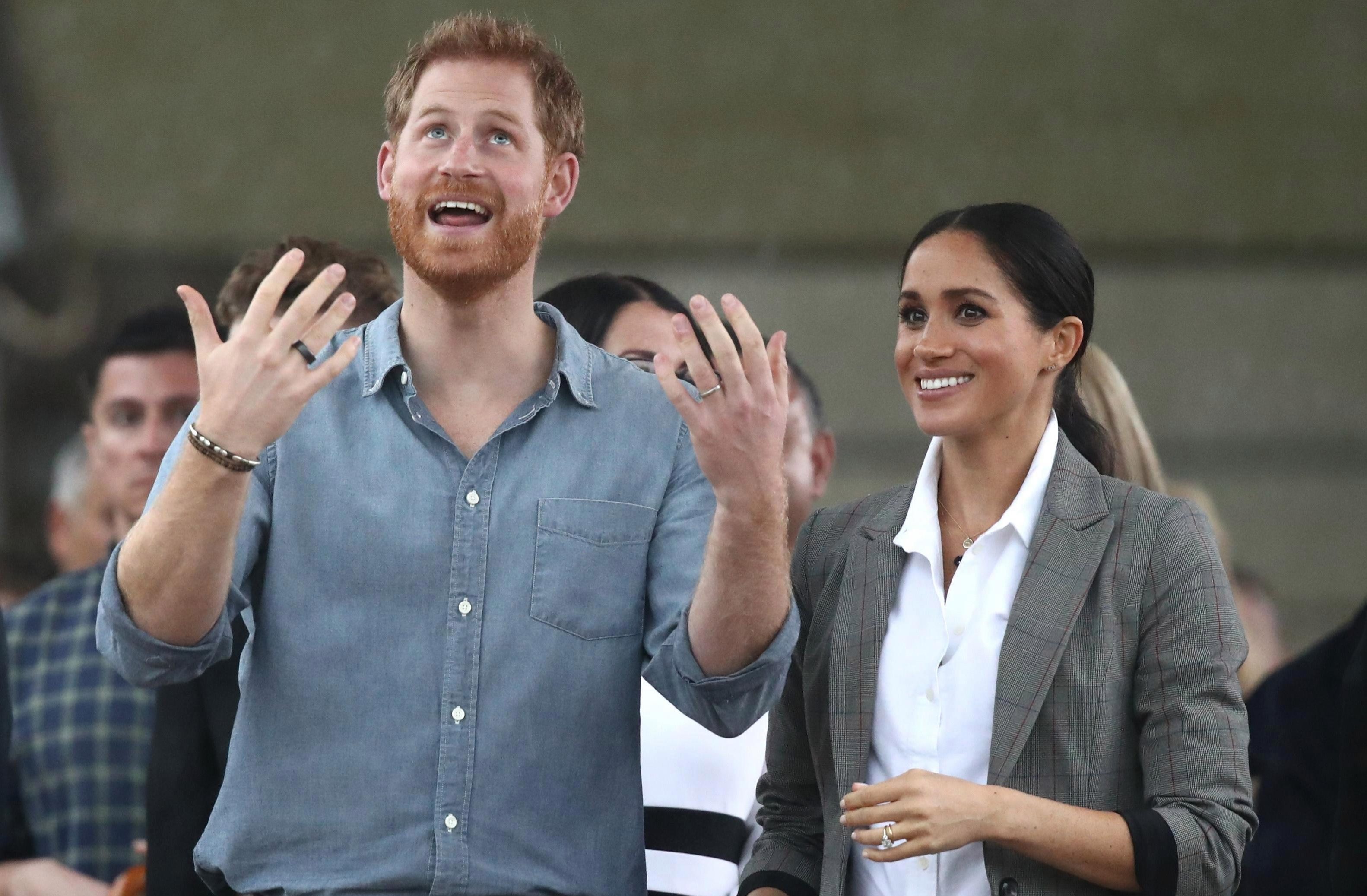 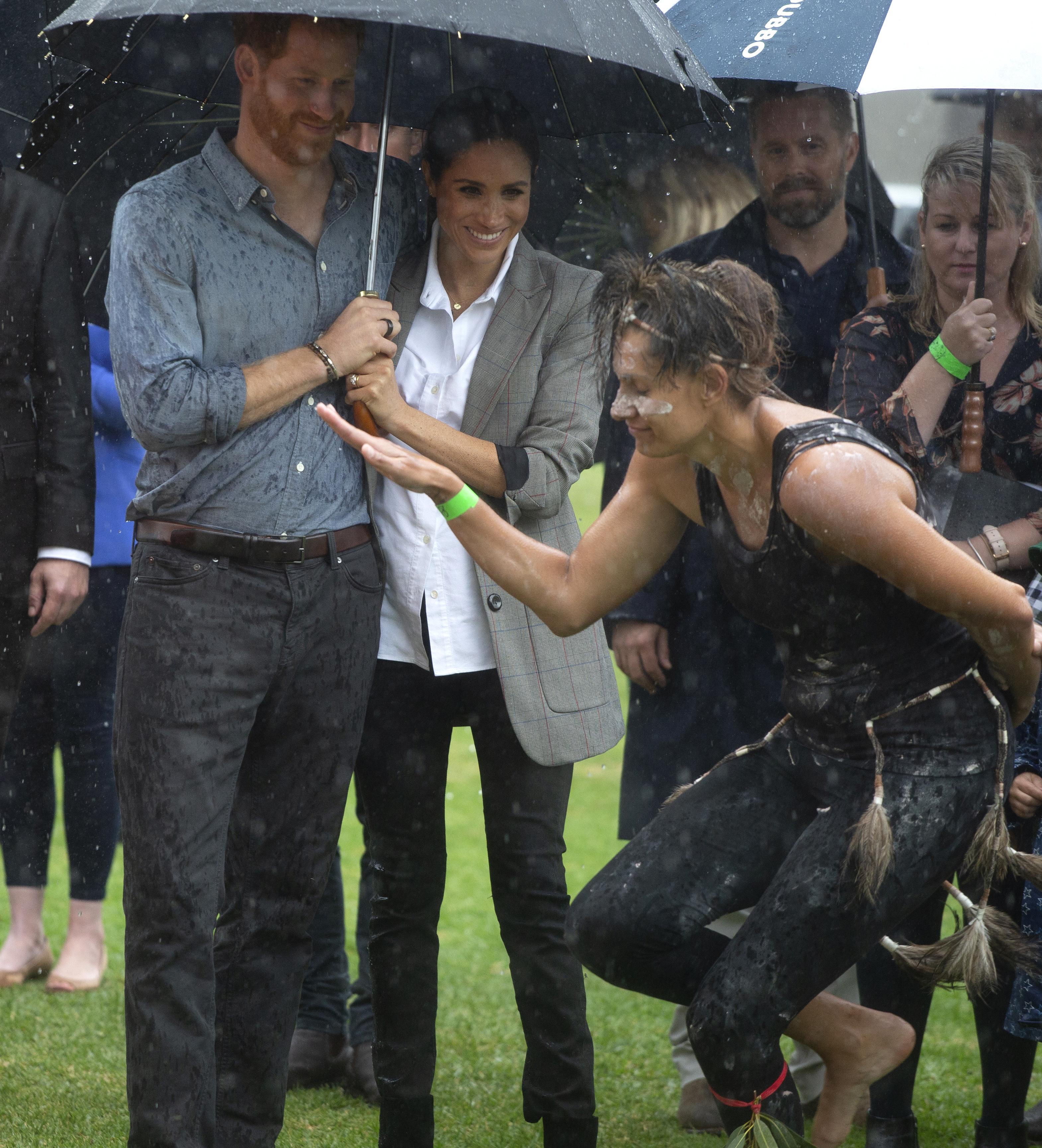 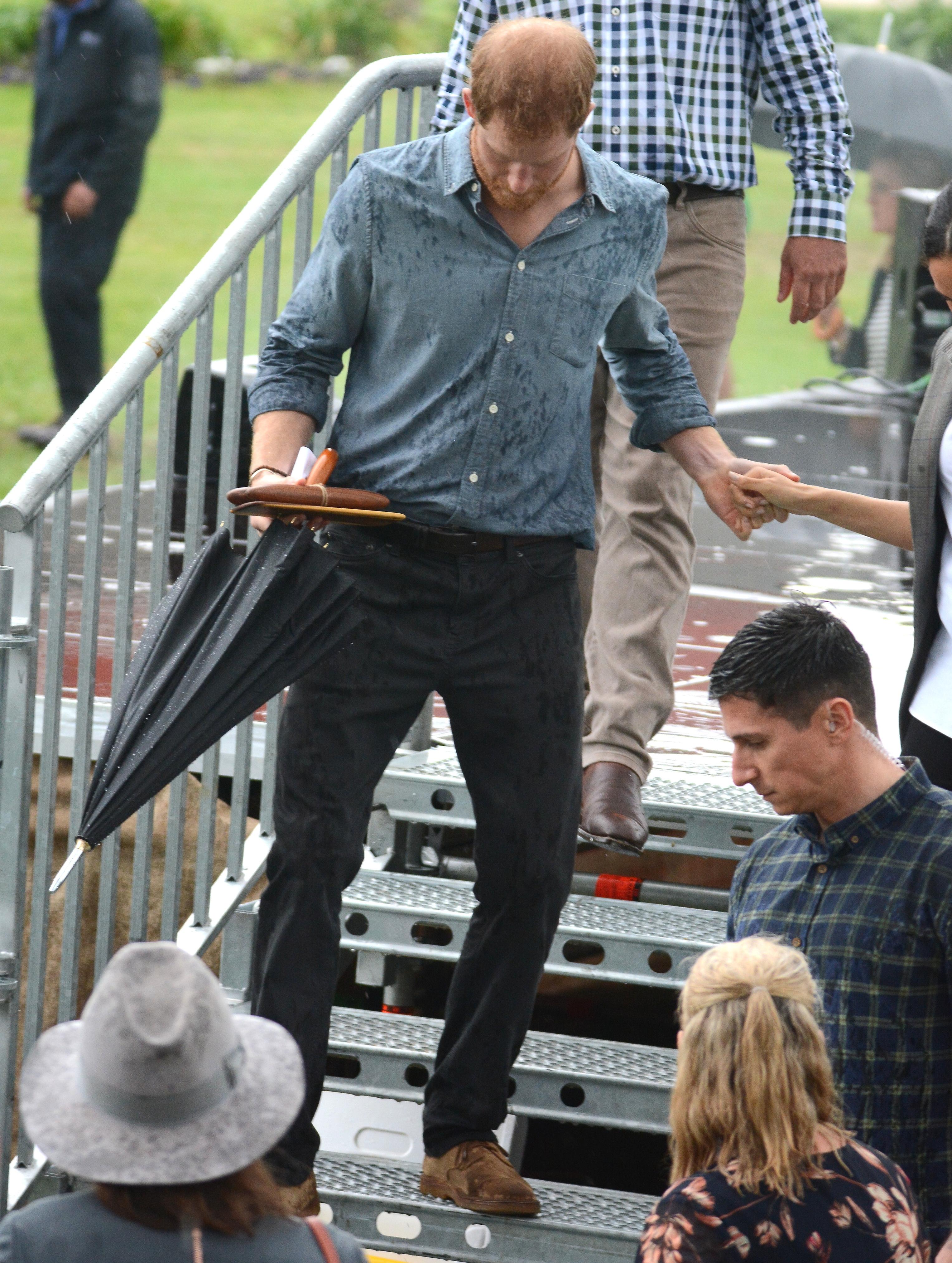 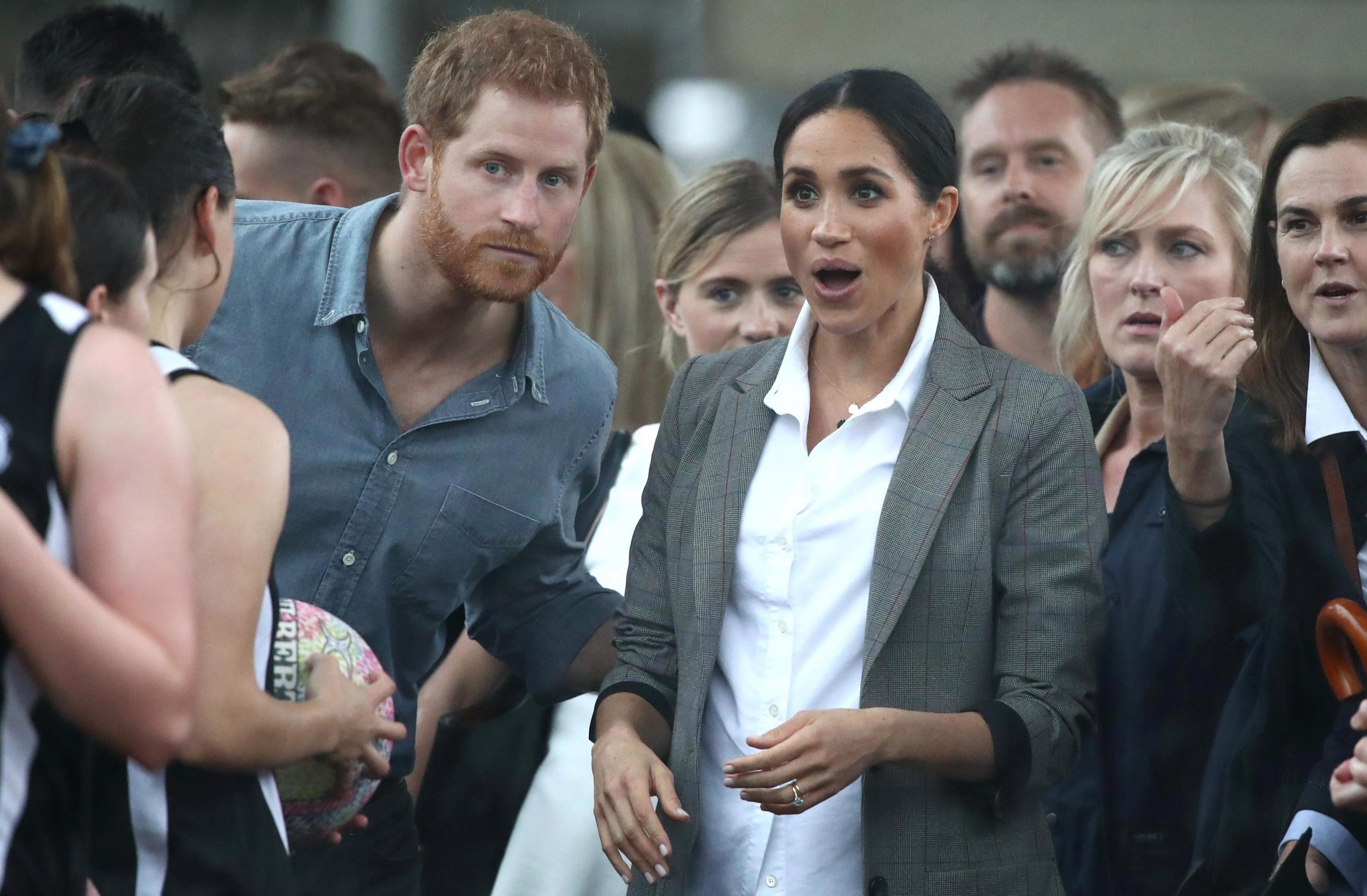 He even quipped at the end of the speech: "The rain was a gift."

But added: "Despite welcome rain it's going to take a lot more and a long time to recover."

They then met football and netball teams who had waited in the torrential downpour to shake their hands.

Earlier the royal pair rolled up their sleeves to feed cows and help with other rustic duties.

The Duchess of Sussex even rustled up a banana bread to bring to the picnic.

She reportedly made the treat last night in the kitchen at Admiralty House. 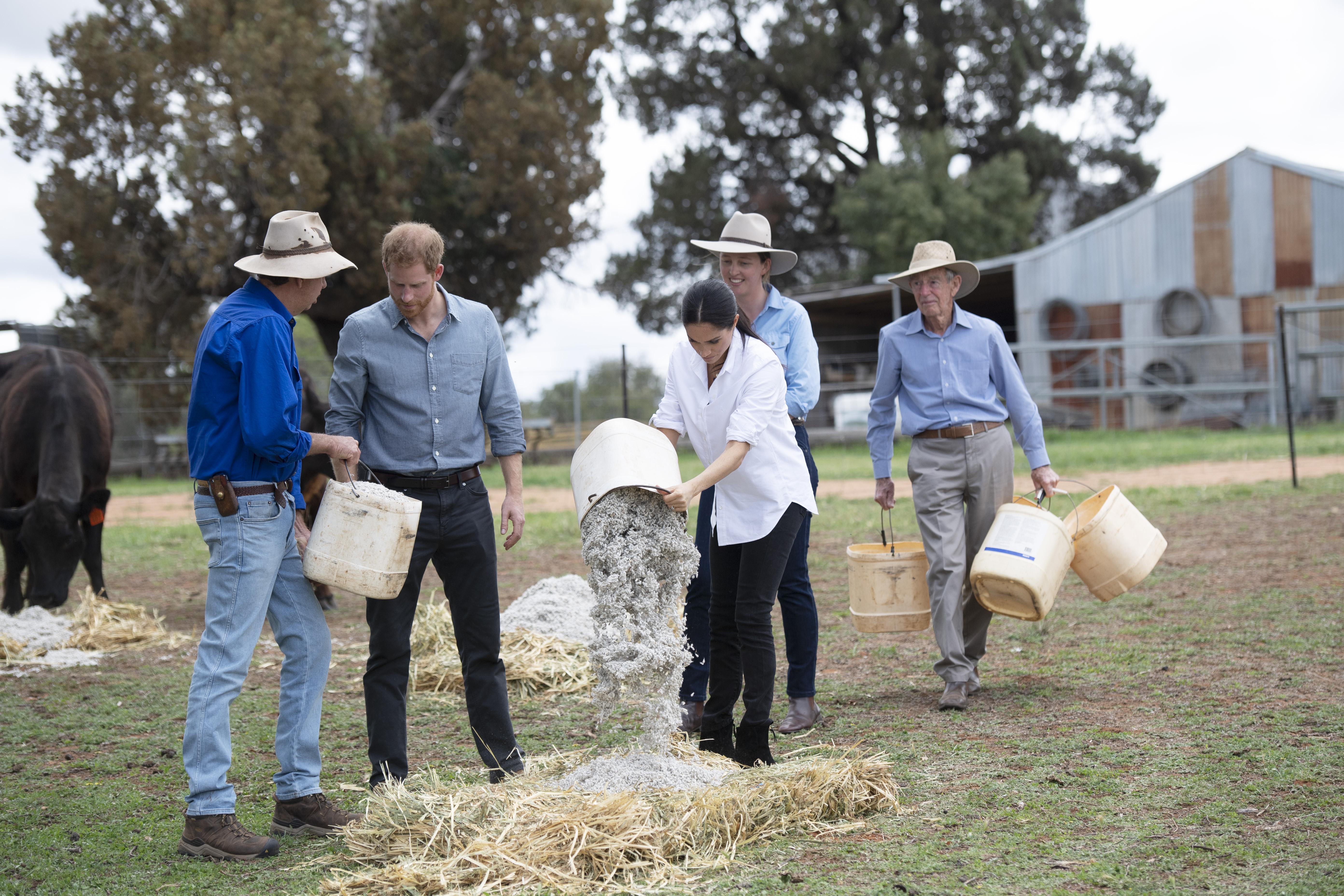 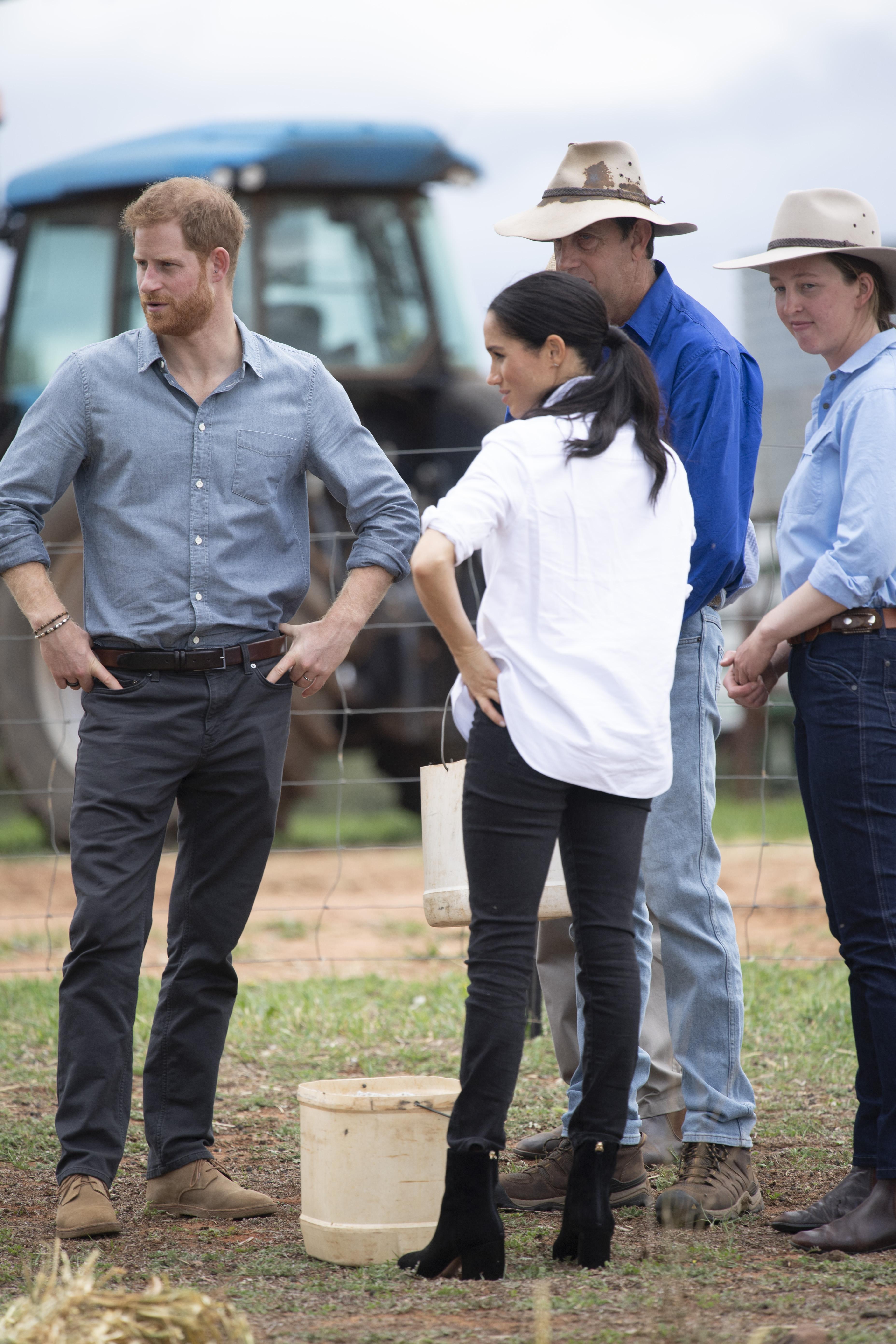 And she looked keen to get down and dirty on the farm – even if her JCrew footwear wasn't the most appropriate for agricultural hard-labour.

She later said: "Meghan told me that she’s feeling pretty good so far, which is great, and that she’s running on adrenaline."

“She said they’re doing 76 engagements in 16 days, with maybe one rest in the middle. She’s made for this royal business, isn’t she?”

Benita Woodley, 20, fifth generation of the farm family, said: “Meghan said if you go to someone’s house you always bring something, so she did." 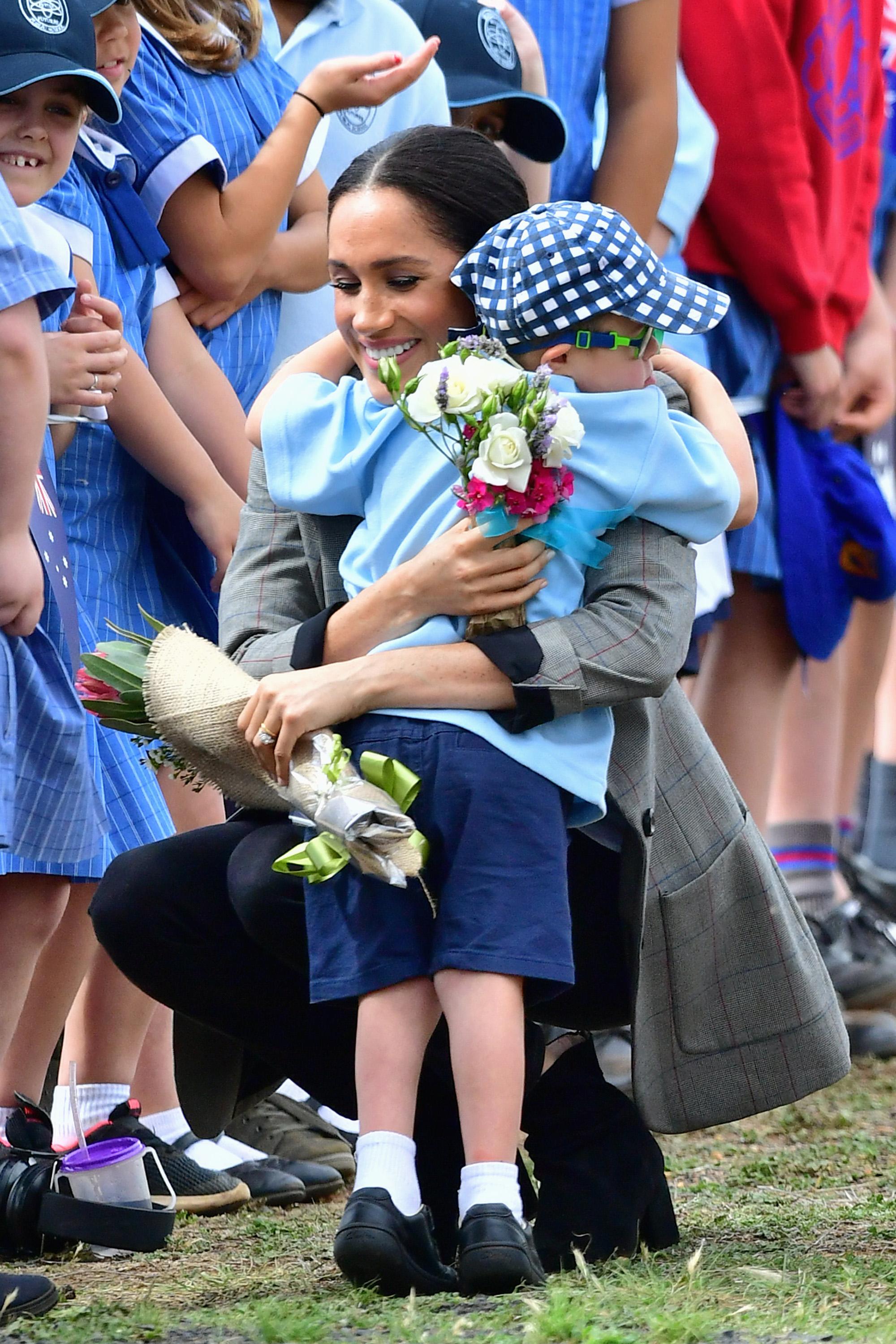 Meghan and Harry were greeted with hugs and flowers as they arrived.

Little Luke Vincent got up close and personal the royal couple, who announced they were expecting their first child on the eve of their first overseas tour together.

Both Meghan and Harry got an adorable hug from Luke, five, who told the Prince he was his favourite person after Father Christmas.

Mum-to-be Meghan arrived wearing jeans by Aussie brand Outland, a shirt from Maison Kitsune,  Boots from J Crew and a jacket from her friend Serena Williams' collection and necklace by Natalie Marie.

The royal couple headed straight from the airport to meet with flying doctors where they learnt about childbirth using a mannequin.

They even had to contend with flies as heroic Prince Harry stepped in to swat them away from one woman.

And they met Dubbo schoolgirls who are part of the Girls’ Academy, which supports pupils from aboriginal and Torres Strait Islander backgrounds.