Meghan Markle’s cannabis-growing nephew stands to make a fortune from ‘Markle Sparkle’, a new strain of marijuana created in honour of the royal wedding.

The £206-an-ounce ‘extremely potent’ blend is as ‘unique and individual’ as Meghan according to her nephew Tyler Dooley, 25, and is so strong ‘it will blow anyone’s crown off.’

Dooley, who grows marijuana in Oregon where, it is legal, plans to launch ‘Markle Sparkle’ on June 2 at the High Times Cannabis Cup in Sonoma, California – the world’s biggest celebration of marijuana which attracts tens of thousands of visitors from all over the world each year. 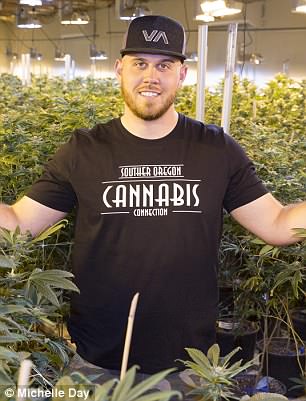 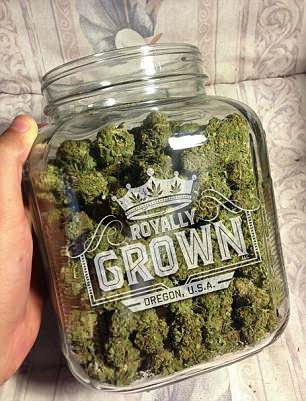 Dooley applied for the patent to the new strain this week: ‘It’s a secret blend and the high is amazing. It’s very potent and smells of blueberries. It is unique and classy like my aunt. She and Prince Harry are welcome to a free sample any time. I know Harry has always enjoyed a good party. I’d like to think he and my aunt will approve of this.’

Tyler and his mother Tracy Dooley, who was married to Meghan’s half-brother Tom Markle Jr., have created an umbrella company called ‘Royally Grown’ and could potentially earn millions from marketing the new strain alongside other products including edible products like Markle Sparkle-infused brownies, oils and tinctures.

There is a ‘Royal Relief’ oil made up of Cannabidiol (CBD) oil which does not contain any THC, the substance in cannabis which makes users high.

The medicinal marijuana oil is said to help relieve pain and reduce inflammation.

Businesswoman Tracy who is handling the legal and marketing side of the company, says they plan to expand ‘Royally Grown’ to offer dozens of products including an organic hemp clothing line, make-up, skincare products. jewelry and bath products: ‘Everything will be of the highest quality. We want to live up to the royal standard,’ Tracy said. 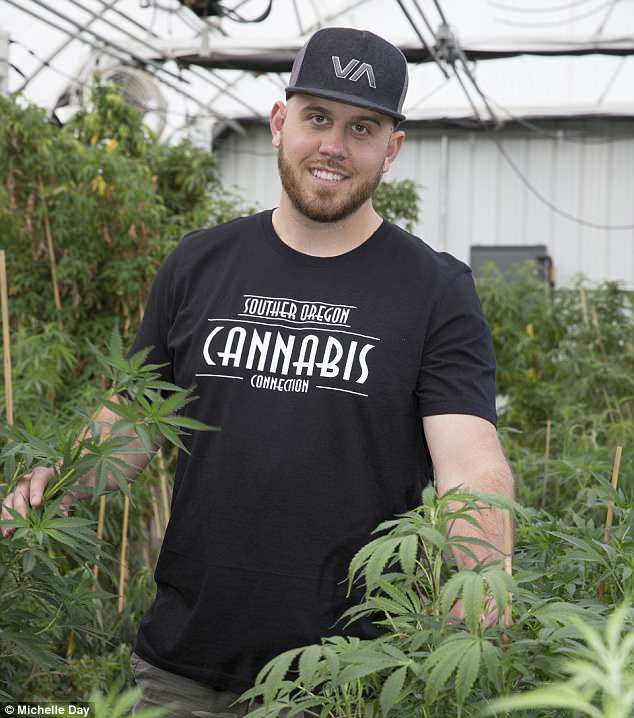 Mr Dooley has applied for a patent for the new strain, saying: ‘It is unique and classy like my aunt. She and Prince Harry are welcome to a free sample any time’

‘We plan to build a global empire like the Kardashians.’

Tracy, 50, known as ‘Mama D.’, started her first business at 15 and successfully ran four flower shops, added: ‘The company will encompass medical marijuana but also other hemp uses like clothing, paper goods and household items, fashion and beauty. We are all so proud of Meghan and everything she’s accomplished in her life. We want our products to live up to the royal standard.’

Tracy, Tyler and Meghan’s other nephew T.J.,26, will be in the UK as wedding correspondents for Good Morning Britain.

Tracy, a recovering alcoholic, says she believes Royally Grown will be part of the multi-billion dollar a year legal marijuana business: ‘Even though it is not yet legal in England medical marijuana is one of the fastest-growing businesses in the world, particularly here in the States.

‘Meghan has done brilliantly and has worked hard to achieve her dreams and now we’re hoping to achieve ours.’

Tyler added: ‘We’re going to make joint papers, accessories, grinders, edibles. In Oregon we produce the premier strains of outdoor, sun grown cannabis and Markle Sparkle is the best of the best. Harry has always enjoyed a good party. I like to think he’d approve.’

Experts predict the product will be a hit.

High Times spokesman Jon Cappetta said: ‘If the quality of the strain matches the hype over it’s name, Markle Sparkle has the potential to be very lucrative. Title strains like Blue Dream, Sour Diesel, or OG Kush are sought out by name across the world, and in turn can command higher rates. These are decades old strains we’re talking about. If this hits in the way they are hoping, it will not only make money for years to come, it actually has the potential to outlast the marriage.’