The Chinese company which won the $2.3 billion contract to build Melbourne's new train fleet is central to President Xi Jinping's controversial Belt and Road Initiative and was recently blacklisted by the US government due to the security risks posed by its ties to the Chinese government.

CRRC Changchun Railway Vehicles, which beat local bids in 2016 to win the contract to build 65 new high-capacity metro trains, is a subsidiary of major Chinese state-owned rolling stock manufacturer CRRC and has been identified as a beneficiary of Uighur labour. 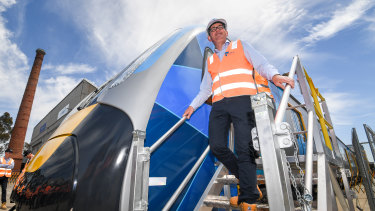 The news comes after fresh scrutiny on the Victorian government's dealings with the Chinese government with the revelation that Premier Daniel Andrews last year advertised the state as being “China’s gateway to Australia”.

The train project, which is more than 18 months behind schedule, was signed a week before Mr Andrews travelled to China in September 2016. Three years later, when the Premier sought more Chinese investment and gave his official endorsement to the BRI, China's expansionist infrastructure policy, the deal was held up as an exemplar.

But CRRC has been flagged by the US Defence Department as a potential cyber-security threat through its involvement in critical infrastructure. It was also listed in a March report from the Australian Strategic Policy Institute as one of 82 companies directly or indirectly benefiting from the use of Uighur workers through potentially abusive labour programs.

The report found KTK Group, a supplier to CRRC, began using Uighur labour in 2019 at one of its Chinese factories. The Victorian government has sought assurances from the company that it is not benefiting from exploited labour. 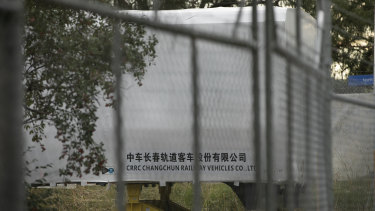 An Age and Sydney Morning Herald investigation has also found the Andrews government hired a person who had recently worked for Downer, which is part of the Evolution Rail consortium with CRRC, to play a key role in the tender process in 2015. Just months after CRRC and Downer won the bid in 2016, the official went back to work for Downer, raising questions about the impartiality of the tender process.

CRRC, now the largest rolling stock manufacturer in the world, was established in 2015 after two of China's biggest rail firms merged to create a national export champion. It turned over more than $44 billion in 2018 and employs about 180,000 workers at more than 40 subsidiaries.

Beijing's "Made in China 2025" policy lists 10 industries in which China seeks to become the global leader. At number six is rail equipment and CRRC is central to that ambition. The company is developing bullet trains for BRI signatory countries and has been involved in dozens of projects in BRI nations including Pakistan, Iran, Italy and Turkey.

In a 2018 CRRC report, in a section titled, "Promote the Interconnection of the World", the company said it "responded positively to the Belt and Road Initiative … from the traditional export markets of Asia, Africa and Latin America to Europe, the United States and Australia". The second project listed in the report was the Victorian train deal.

Though the Victorian government did not sign up to the BRI until 2018, it had embarked on its "China Strategy" in April 2016 which set targets for trade and strategic cooperation. The state government announced that CRRC won the contract on September 12, 2016, a week before Mr Andrews' 2016 trip to China to discuss with top Chinese officials the government's China Strategy and transport investment.

Mr Andrews signed a memorandum of understanding for the BRI deal in 2018 and officially signed up to the program in October 2019 in Beijing. In the October trip, he met with leaders of local infrastructure firms including CRRC. Speaking notes prepared for the Premier's address to a delegation stated: "I see Chinese companies establishing a presence in Victoria and actively bidding for Victorian projects as essential."

"You will find the Victorian market accessible, and my government will welcome your participation and do what it can to facilitate success. My government is dedicated to this effort, and I will personally continue to share the opportunities present in my state's infrastructure agenda". 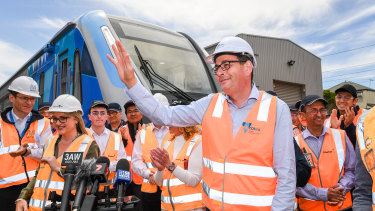 The CRRC offering was chosen ahead of bids that would have resulted in the trains manufactured locally at established factories in either Ballarat, owned by Alstom, or Dandenong, owned by Bombardier. CRRC did not respond to requests for comment.

The federal government has repeatedly criticised the Victorian government for signing onto the $US1 trillion infrastructure-building plan and is preparing legislation that could be used to cancel Victoria's BRI deal. Many western governments and foreign policy experts believe the initiative is used by China to increase its geopolitical power and coerce developing nations by saddling them with debt.

CRRC has also been active in trying to increase its footprint in the US over the past decade. It has built trains for the cities of Boston, Chicago and Los Angeles. However, increasingly, politicians from the left and right have voiced concern about CRRC's involvement in critical infrastructure.

In June, the US Defence Department made public for the first time a list of Chinese companies operating in the US that have close ties to the Chinese government or military. Companies on the list, which includes Huawei and CRRC, can be subject to emergency economic powers and sanctions by the US president.

"As the People's Republic of China attempts to blur the lines between civil and military sectors, 'knowing your supplier' is critical," Pentagon spokesman Jonathan Rath Hoffman said in a statement. "We envision this list will be a useful tool for the US government, companies, investors, academic institutions, and like-minded partners to conduct due diligence with regard to partnerships with these entities, particularly as the list grows."

The transport department in Washington DC last year inserted cyber-security safeguards into its tender for metropolitan trains that CRRC hoped to build. Andrew Grotto, a former senior director for cyber-security policy on the US National Security Council, said malware could divert data collected from trains' security cameras and be used for facial recognition and to track riders.

"The Chinese Communist Party's use of predatory economic practices like illegal state-sponsored cyber-theft reinforce concerns about Chinese companies playing a role in critical infrastructure – whether it be rail cars or 5G telecommunications networks," Mike Andrews, a US Defence Department spokesman, said in January 2019.

China-Australian relations expert John Fitzgerald, emeritus professor at Swinburne University of Technology, said claims CRRC trains could be used for espionage or cyber warfare were "overstated". However, Professor Fitzgerald said the train deal could expose Australia to further economic coercion by China, which he said "had shown many times it is willing to leverage Australia's economic dependence for its political advantage."

For the first half of last decade, he said, Australian governments had often opted for low-cost suppliers of core manufacturing such as automobile and rail equipment. As a result, Australia had lost its independent capacity for rolling stock manufacturing and had become reliant on China, exposing the nation to coercion.

Professor Fitzgerald said the "extraordinary focus" on China by the Victorian government may come at the expense of deeper engagement with India and Japan. "Did [Mr Andrews] offer similar investment opportunities on projects to Japanese, Indian and other regional partners?" he asked.

A person formerly employed as a contractor by Downer, a member of the same consortium as CRRC, returned to work at Downer shortly after holding a top role in the Victorian government's high-capacity train tender process.

The former worker was the Transport Department's project director, according to his LinkedIn profile which says he "managed a team of more than 100 staff and advisers to deliver and procure the [public-private partnership] up to financial close". He finished his role with the department in May 2017, eight months after the train contract was awarded, and soon afterwards, in July that year, took up a contractor job as Downer's director of major projects. He had also worked for Downer prior to working for the Victorian government.

A 2018 Independent Broad-based Anti-corruption Commission report on corruption risks states that movement between the public and private sectors is common and can be beneficial but sometimes presents risks. The report urged the Victorian government to consider Commonwealth Public Sector Commission guidelines that recommend restricting successful tenderers from employing government officials who managed the tender process after it is completed.

One of the key risks, according to the federal guideline, is that "the employee, while still employed in the [public service], would use their position to influence decisions and advice in favour of the prospective new employer."

Downer spokesman Michael Sharp said the employee's "position at Downer has never posed a conflict of interest," and that "he has never held a Downer-related high-capacity metro train position". Downer did not begin contract discussions with the man until after he had completed his contract with the Victorian government, Mr Sharp said.The company "strongly rejected any questioning of probity" on the matter.

The train deal is running more than 18 months late as trains have arrived from China with significant faults. According to leaked cabinet documents reported by The Age in September, the government is hoping for a December roll-out but pandemic-related delays could occur.

The Victorian government announced in 2016 that 60 per cent of content used to build the high-capacity metro trains would be locally manufactured. However, work that was originally being done in Melbourne was off-shored to CRRC's factory in April 2019 in order to meet efficiency targets. Multiple union officials familiar with the project say trains now arrive in Melbourne with electrical wiring and cabin installations already completed, representing many hundreds of hours of lost local work.

The Victorian government said the plan to do more work in China did not impact on the number of local jobs or the local content target. "We've been through a rigorous and competitive tender process to deliver brand new trains that will travel through the Metro Tunnel. The train design meets and in many cases exceeds all of our requirements and standards," a government spokeswoman said.

Luba Grigorovitch, secretary of the Victorian Rail, Tram and Bus Union, said in October 2019 that the state government was allowing the rail consortium to "prioritise meeting deadlines at the expense of local jobs."

CRRC had a history of low local content usage and late delivery before the HCMT project. The company used no minimal local content to build NSW's Waratah trains from 2006 which were delivered years late and arrived with defects. In South Africa, trains had defects and criminal charges were laid over corruption allegations. About 40 CRRC trains were taken off the tracks in New Zealand due to asbestos contamination in 2014 and the Singaporean government shipped back 26 faulty trains in 2016.

Victorian officials were repeatedly made aware of CRRC's past issues during the procurement process, according to an industry source with first-hand knowledge of the tender process who was not authorised to speak publicly by their company. The strange reason Dolly Parton likes to spend time in cemeteries
We and our partners use cookies on this site to improve our service, perform analytics, personalize advertising, measure advertising performance, and remember website preferences.Ok