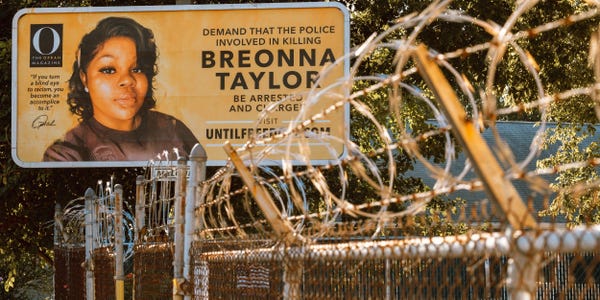 Kentucky Attorney General Daniel Cameron, announcing last month that no police officers would be charged with homicide for killing Breonna Taylor, claimed members of a grand jury agreed with him in finding that cops "were justified" in opening fire.

On Sept. 23, the grand jury in Louisville, Kentucky, indicted just one of the cops involved in the incident that led to Taylor's killing by police, indicting former officer Brett Hankinson on three counts of first-degree. "While there are six possible homicide charges under Kentucky law," Cameron said at the time, "these charges are not applicable to the facts before us," he said, asserting that "the grand jury agreed."

But one member of the grand jury says Cameron's version of events does not reflect what happened at all. In a statement issued Tuesday, an anonymous juror said they were never given the option to indict anyone for homicide. And, they added, the fact that the jury did not indict anyone on charges they were not presented with should not be read as an endorsement of any police officer's behavior.

"The grand jury didn't agree that certain actions were justified," the juror stated. "The grand jury was not given the opportunity to deliberate on those [other] charges and deliberated only on what was presented to them."

"I cannot speak for other jurors," they added, "but I can help the truth be told."

Now members of the public may get a chance to see for themselves exactly what such jurors were told. On Tuesday, a Kentucky judge ordered that grand jury records in the case be unsealed so that people might see if "publicly elected officials are being honest," as NBC News reported.

Taylor, a 26-year-old Black woman, was shot to death after Louisville police executed a no-knock warrant on the apartment where she was staying with her boyfriend, falsely believing that illegal drugs were being sold on the premises. Taylor's boyfriend opened fire on police, claiming they never announced they were law enforcement.

Attorneys for Taylor's family are calling for a "new independent prosecutor" to take over the case.

"We now know what we suspected: Attorney General Daniel Cameron took the decision out of the grand jury's hands," lawyers Ben Crump, Sam Aguiar, and Lonita Baker said in a statement on Tuesday. "It is a despicable miscarriage of justice that is disrespectful to the life of Breonna Taylor that AG Cameron white washed what his office presented to the grand jury."

Have a news tip? Email this reporter: [email protected]