A video clip of the Prince of Wales greeting officials in Israel shows him walking along the front row of seats, shaking hands with several world and Jewish leaders but completely missing the US vice president.

In one side-splitting meme, a man called Chrissy Stu, asked: ‘How come #PrinceCharles didn’t shake that #MikePence hand? Have they got beef?’

The tweet was accompanied with a GIF of Will Ferrell’s Anchorman character beckoning the viewer for a fight.

In a similar fashion, other users used GIFs to illustrate the awkwardness of the apparent snub.

A user named TAXO opted for Tina Fey’s character in 30 Rock to portray the rejection.

Others used the opportunity to take a dig at the US President and Pence.

Terae Raymond said: ‘All Mike Pence ever does is stand behind his crooked boss Donald Trump like a wooden statue. Can’t blame Prince Charles for overlooking an empty suit. #princecharles’

While many mocked Pence, others spoke of a new found respect for the Prince of Wales.

ECMKat said ‘Not a fan of Prince Charles but this deserves respect’, accompanied by a GIF of a youngster tipping his cap.

Earlier today, Prince Charles walked past a selection of dignitaries, greeting them at an Auschwitz memorial event in Jerusalem.

But when he came to Pence, the heir to the throne merely looked him in the eye before moving on to shake hands with Israeli Prime Minister Benjamin Netanyahu.

Both the White House and Buckingham Palace denied it was a snub and said the pair had met before entering the hall, exchanging smiles and joking with each other, and shaken hands after the event.

Katie Waldman, the Vice President’s press secretary, tweeted a video and picture of Pence and Charles together before the event.

In the clip the Prince first speaks to the German president Frank-Walter Steinmeier, then shaking hands with Moshe Kantor, founder of the World Holocaust Forum which held the event.

He is then seen walking past Pence to shake hands with Netanyahu and the Israeli President, Reuven Rivlin.

The Prince did not appear to make an effort to approach Pence and his wife, Karen, as the VP then patted the Queen’s first son on the back as he spoke to Netanyahu.

Strictly speaking, Prince Charles followed protocol, shaking hands with a head of state – the German president – then his hosts, Kantor, Netanyahu and Rivlin; Pence is not not a head of state or a host.

But the optics of the apparent snub were impossible to miss – as was Pence’s expression.

Once Charles walked past Pence, he then took his seat next to French President Emmanuel Macron and warmly shook hands with Russian President Vladimir Putin.

After a friendly discussion with Netanyahu, Prince Charles then shook hands with Macron.

The Prince greeted Putin with a handshake and a smile in a separate clip posted online.

Charles had been meeting including world leaders at the event to mark the 75th anniversary of the liberation of Auschwitz.

A Buckingham Palace official denied this was a snub, telling the BBC the prince and Mr Pence had a ‘long and warm conversation’ before the ceremony began.

Katie Waldman, the Vice President’s press secretary, also denied the prince had blacked Pence, saying the pair had spoken prior to the event and were pictured smiles and sharing a joke.

She tweeted alongside the photograph: ‘This is not true. VP and Prince Charles spoke prior to entering the event floor and after his remarks as well.’ 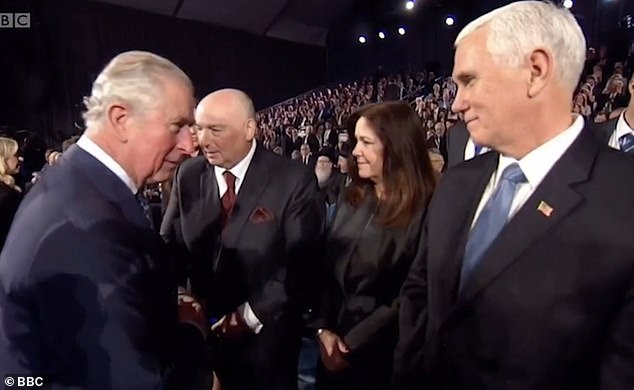 The Prince of Wales approached Mike Pence at the event in Israel as he greeted dignitaries, but did not shake his had after looking him in the eye 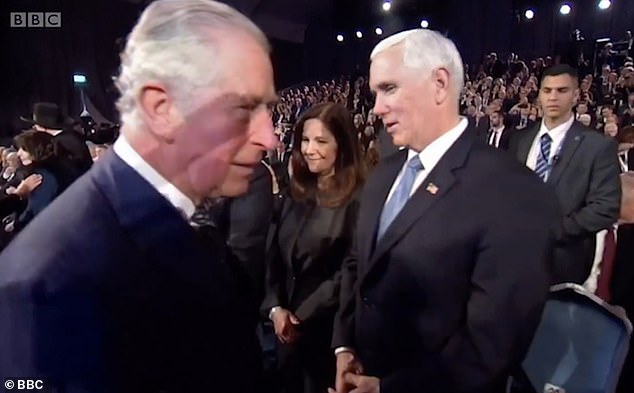 A video clip of the Prince of Wales greeting officials in Israel shows him walking along the front row of seats, shaking hands with several dignitaries. But when he came to Pence, the heir to the throne merely looked him in the eye before moving on to shake hands with Israeli Prime Minister Benjamin Netanyahu 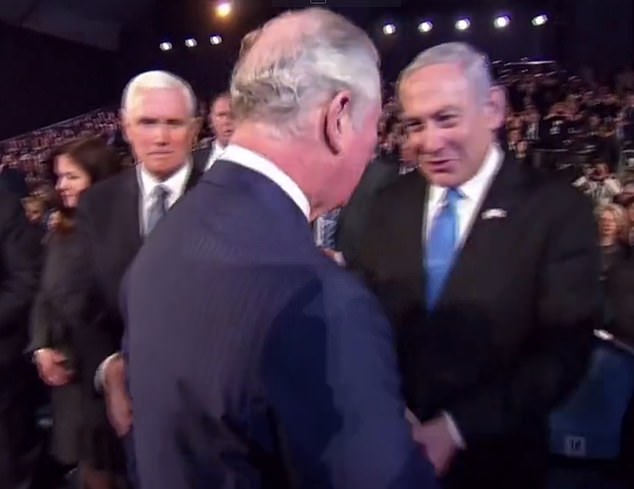 Waldman added in a statement: ‘Vice President Pence and the Second Lady spoke with Prince Charles for five minutes in the pre-program before they entered the hall. Also they shook hands at the end of his remarks.’

Earlier at the memorial, Prince Charles told invited guests that the stories of the Holocaust belonged to many of those in the hall and Jewish people across the globe.

He added: ‘But we must never forget that they are also our story: a story of incomprehensible inhumanity, from which all humanity can and must learn. 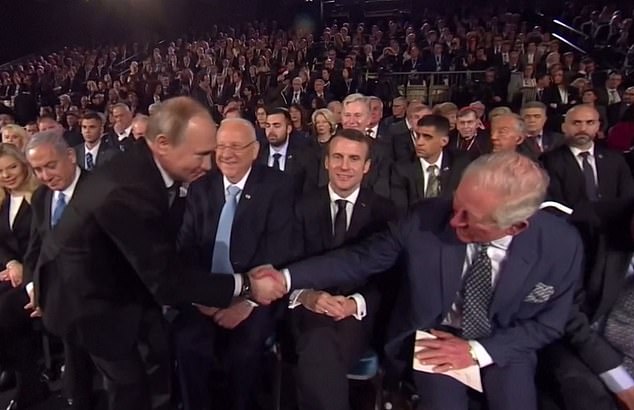 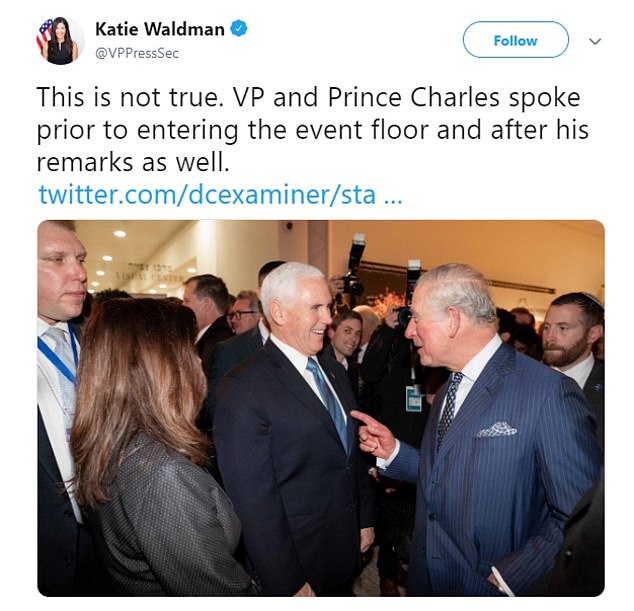 When Pence spoke he urged the international community to ‘stand strong’ against Iran, calling it the only country where Holocaust denial is ‘state policy’.

Putin used his platform at the event to take political aim at Poland. Polish politicians have been infuriated by the central role given to Putin at the historic commemoration. 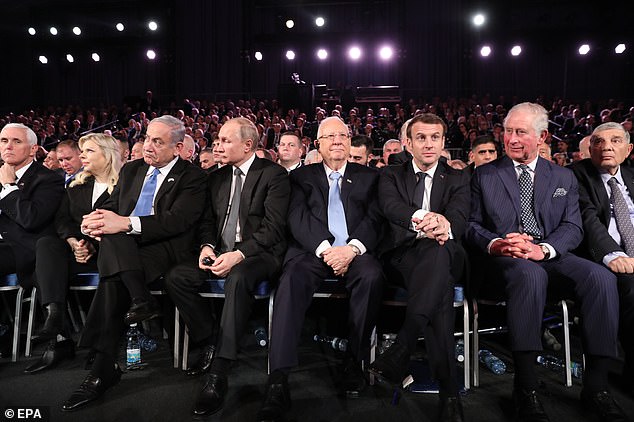 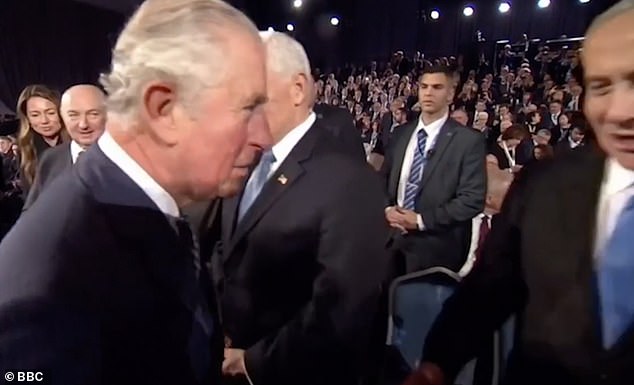 The Russian leader has tried to blame the country for the outbreak of WWII to detract from the Soviet-Nazi pact made in 1939 that carved up Eastern Europe.

The Prince of Wales has urged nations to learn the ‘lessons’ of the Holocaust as he joined world leaders in condemning the scourge of anti-Semitism, during an event marking 75 years since the liberation of Auschwitz.

Charles described the extermination of six million Jewish people during the Second World War as a ‘universal human tragedy’ affecting all, not just the families of those killed by the Nazi regime.

The heir to the throne spoke during the World Holocaust Forum in Israel and told guests, who included Russian President Vladimir Putin and France’s President Emmanuel Macron, the story of ‘incomprehensible humanity’ must not be forgotten. 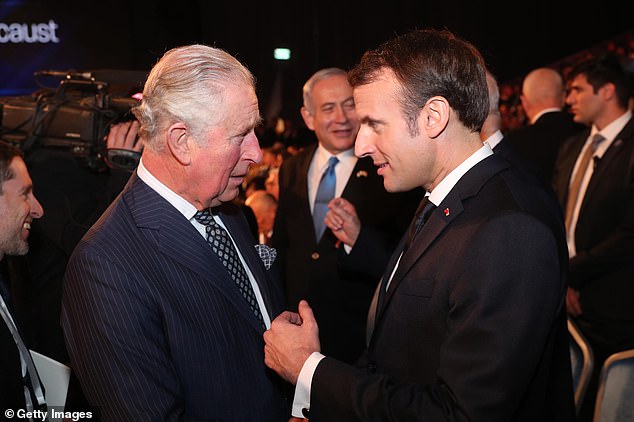 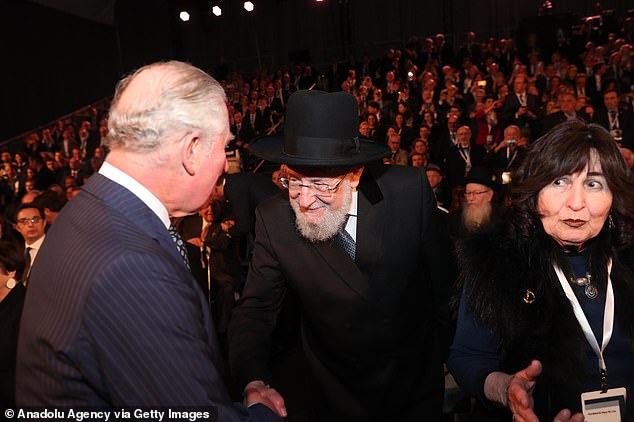 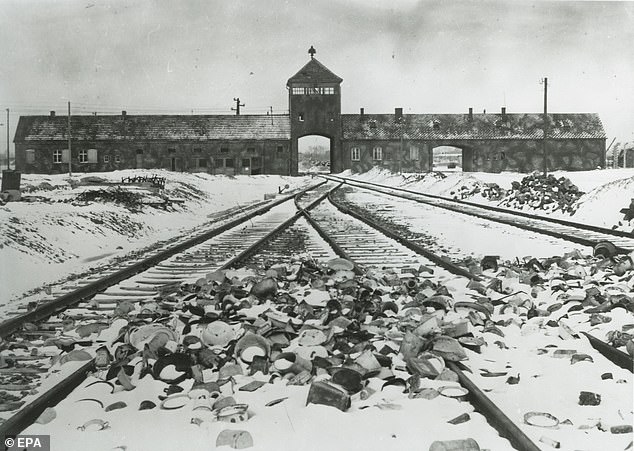 The unloading ramp and the main gate called the ‘Gate of Death’ at the former German Nazi concentration and extermination camp Auschwitz II-Birkenau in Brzezinka, Poland, February or March 1945

And he warned that ‘hatred and intolerance still lurk in the human heart’ but society must remain ‘resolute in resisting words and acts of violence’.

Speaking at the gathering, the largest international event in Israel’s history, staged at Yad Vashem, the World Holocaust Remembrance Centre in Jerusalem, Charles said: ‘The Holocaust was an appalling Jewish tragedy, but it was also a universal human tragedy, and one which we compound if we do not heed its lessons.’

He told the guests, who featured the Kings of Spain and the Netherlands, the stories of the Holocaust belonged to many of those in the hall and Jewish people across the globe.

Charles added: ‘But we must never forget that they are also our story: a story of incomprehensible inhumanity, from which all humanity can and must learn. 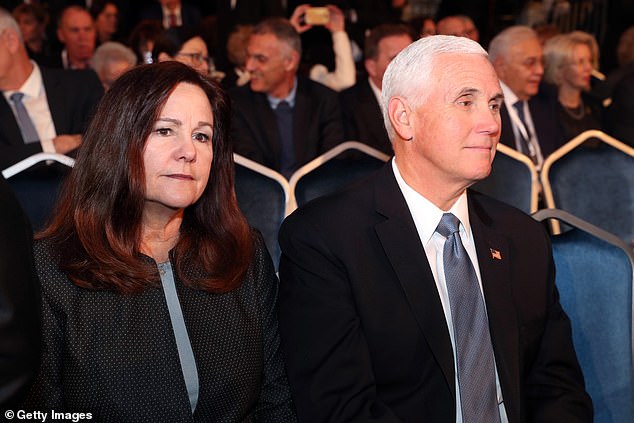 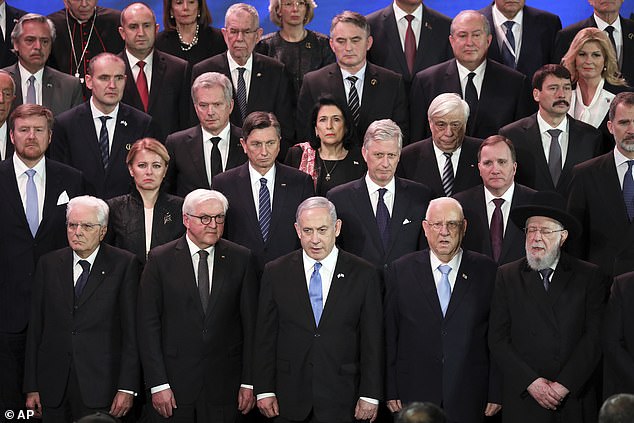 World leaders pose for a family photo during the World Holocaust Forum in Jerusalem. Vice President Mike Pence, Russian President Vladimir Putin, French President Emmanuel Macron, and the presidents of Germany, Italy and Austria were among the more than 40 dignitaries attending

Warning that intolerance was never far away, he said: ‘We must be vigilant in discerning these ever-changing threats; we must be fearless in confronting falsehoods and resolute in resisting words and acts of violence.’

During his speech Charles also paid tribute to the ‘selfless actions’ of his grandmother, Princess Alice, who in 1943 while living in Nazi-occupied Greece sheltered a Jewish family in her own home.

In 1993 Yad Vashem bestowed the title of Righteous Among The Nations on her and she is buried at the nearby Mount of Olives.

Charles described the title as ‘a fact which gives me and my family immense pride.’

The presidents of France, Germany and Russia were among those to deliver speeches to the forum, held to commemorate the 75th anniversary of Auschwitz being liberated by Soviet troops on January 27 1945.

German President Frank-Walter Steinmeier acknowledged during his speech that ‘the worst crime in the history of humanity was committed by my countrymen’.

He added: ‘Seventy five years later after the liberation of Auschwitz I stand before you all as president of Germany and laden with the heavy historical burden of guilt.’