Two thieves impersonating NYPD officers raided a home in the Bronx, N.Y., earlier this month, tying up the homeowners and making off with more than $100,000 in cash and jewelry, authorities said.

Authorities in New York City have released footage of a harrowing home invasion that unfolded earlier this month as detectives search for two suspects who posed as armed NYPD officers and tied up the homeowners before making off with more than $100,000 in cash and jewelry.

The NYPD released new video on Monday of the suspects barging into the home on Country Club Road near Polo Place in the Bronx just after 8 a.m. on Nov. 9.

The two men are seen wearing sweatshirts with the NYPD logo on them, what appears to be a police badge and an NYPD hat. 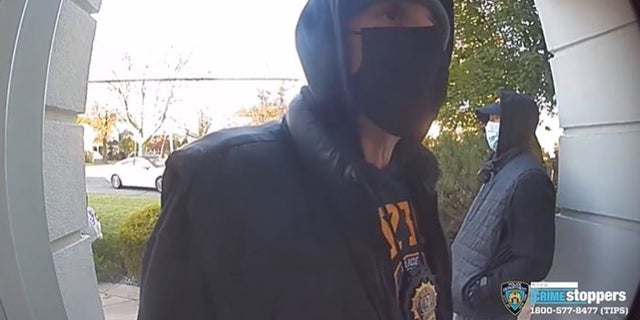 The suspects were described as White males in their 50s who wore surgical masks and sweatshirts with the NYPD logo on them, police said.
(NYPD)

The suspects, who have yet to be identified, were also wearing surgical face masks and described as White males in their 50s.

Police said the suspects had a handgun gun and tied up the two victims, a 50-year-old male and a 40-year-old female, with zip ties inside their home. 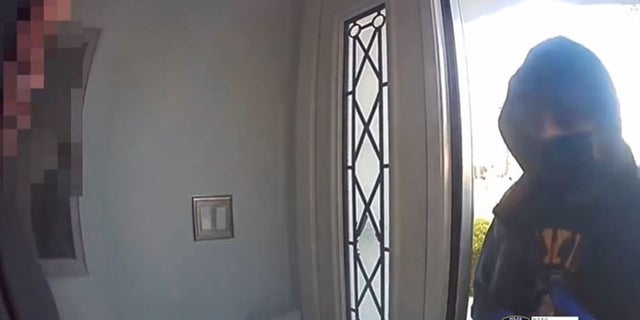 The men stole $30,000 in cash and $100,000 worth of jewelry before fleeing in a white BMW SUV, which was later recovered unoccupied nearby, according to police.

First Deputy Commissioner Benjamin B. Tucker addressed the robbery and police impersonators on Tuesday morning during an appearance on Spectrum News NY1. 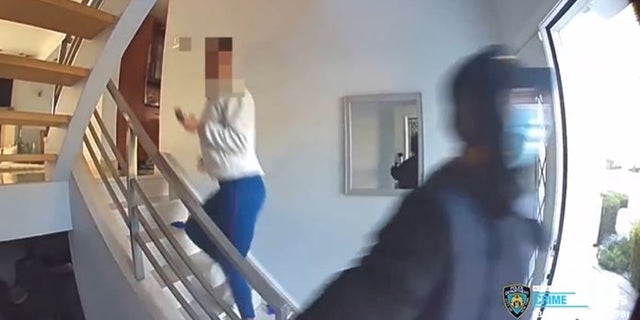 The suspects tied up a 50-year-old male and a 40-year-old female with zip ties inside their home.
(NYPD)

“If you’re not sure, you can ask for identification if you want more verification that they’re officers,” Tucker said. “But if they’re wearing a shield or they show you an ID card, if you request that, that should be enough proof.”

The first deputy commissioner said that the department does not generally get a large number of police impersonation cases, but that when they do, a unit in the internal affairs bureau investigates it thoroughly.

No arrests have been made as of Tuesday morning.

Authorities are offering a reward of up to $3,500 for information that leads to an arrest.