The Iran nuclear deal is set to dominate the agenda when German Chancellor Angela Merkel visits the White House later on Friday.

Merkel is heading to the White House for talks with Donald Trump and is facing an uphill struggle to save the nuclear deal, avoid a trade war and make her relationship with the US president functional again.

The German leader’s visit has already been overshadowed by a backslapping three-day festival of ‘fraternite’ between Donald Trump and French President Emmanuel Macron earlier this week. 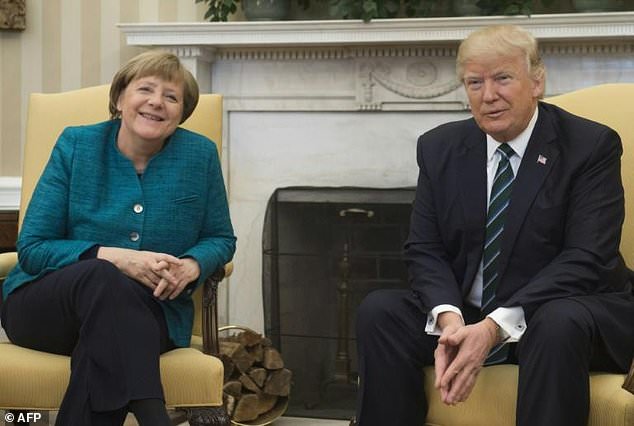 This time around, the tricolor French flags were only just removed in time for Merkel’s arrival for a one day, run-of-the-mill ‘working visit.’

The stylistic differences between the Macron and Merkel visits are ‘very telling’ according to Mona Krewel of Cornell University.

It points, she said, ‘to the much more difficult relationship Trump has with Merkel.’ 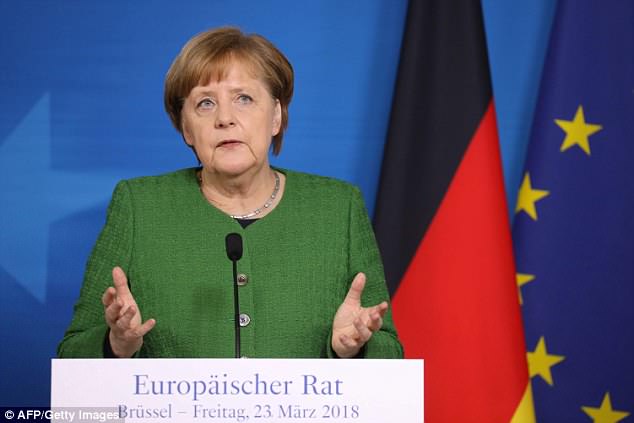 That is a dramatic change in fortunes for the German leader who, for more than a decade, was seen by Washington not just as a sensible and pragmatic interlocutor, but the de facto leader of Europe.

Her relationship with Barack Obama was particularly close, officials from that administration have said, so much so that he was a powerful voice encouraging her to run for a fourth term.

Their partnership has proven, along with centrists claiming her as the new ‘leader of the free world’, to be a poisoned chalice for Berlin in the age of Trump.

Just hours before the chancellor landed late Thursday, some 15 months after Trump was sworn into office, the Republican Congress finally got around to confirming an ambassador to Germany.

Shortly after his nomination, Richard Grenell, who is known for his pugilistic conservatism and combative defense of Trump’s ‘America First’ policies, told AFP it was ‘humbling’ to be chosen for a post once held by John Quincy Adams, and he vowed to work diligently.

‘There is a special responsibility that all US officials have to reject partisan politics when they take government service jobs,’ he said.

Merkel this week stressed that, despite the differences, she wants to preserve the bedrock strategic partnership.

‘The transatlantic alliance, given the many non-democratic developments in this world,’ she said, ‘is a great treasure that I certainly want to cherish and nurture.’

Despite her more sober style, she is unlikely to diverge much from Macron on substance.

She will be trying to persuade Trump to back off his dual threats of punitive metal tariffs that could spark a transatlantic trade war and his instinct to scrap the Iran nuclear deal. 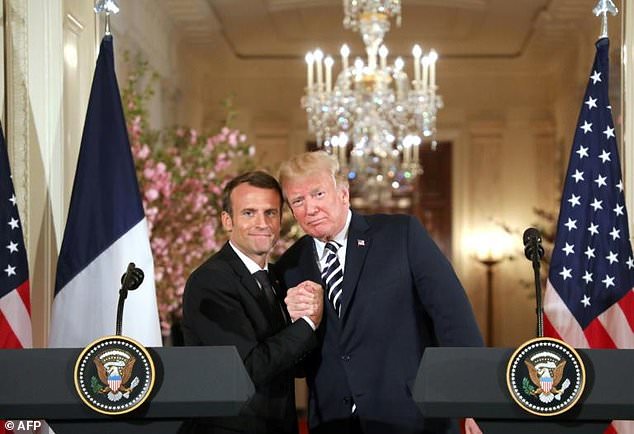 Merke’s trip to Washington comes on the heels of visit by French President Emmanuel Macron, who was given a lavish welcome by Trump

Trump last month announced tariffs of 25 percent on steel and 10 percent on aluminum, claiming foreign imports were harming US national security by undermining the domestic production needed for military readiness.

After an outcry from US allies, he granted a temporary exemption to key partners including the European Union, but this expires on May 1.

Trump’s National Economic Council Director Larry Kudlow told CNBC Thursday that Washington would continue to exempt allied economies, including the EU, if they make concessions, citing the example of ‘equal treatment of automobiles.’

On the eve of Merkel’s US visit, Berlin’s hopes were dim.

‘From today’s perspective, we must assume that the tariffs will come on May 1,’ said a German government source. ‘And then we will see how we will handle it.’

The next looming deadline is May 12, the date by which Trump has threatened to tear up the landmark 2015 agreement to stop Iran from developing nuclear weapons in return for relief from international sanctions.

Trump has called the agreement, which Germany helped negotiate, ‘insane’ and the ‘worst deal ever,’ demanding that its ‘disastrous flaws’ be fixed.

Macron came away from his meetings speculating that Trump would kill the deal, but debate continues to rage.

US Secretary of Defense Jim Mattis on Thursday said Washington was yet to make ‘any decision’ on tearing up the deal, but stressed that some aspects needed to be improved.

It is unclear how Mike Pompeo’s confirmation as Secretary of State will tilt the debate.

Despite his hawkish views on Iran, his criticism of the deal had been somewhat tempered in internal discussions, officials said.

As head of the CIA, for instance, he had relayed the spy agency’s institutional assessment that Iran was broadly complying with the terms of the agreement, despite Trump’s public pronouncements.

The German foreign ministry has insisted that ‘the biggest priority is maintaining the existing nuclear accord,’ while Merkel has also called Iran’s ballistic missile program a ’cause for concern.’