‘We were burgled and told to send an EMAIL’: Fury after DOZENS of Met cops were sent to tackle squatters at Oleg Deripaska’s £50m Belgravia home – while other victims are told to track down robbers with a ‘burly mate and dial 999 if it goes pear-shaped’

The Metropolitan Police has been ridiculed online over Scotland Yard’s response to a break-in at Russian oligarch Oleg Deripaska’s Knightsbridge mansion.

The property, on Belgrave Square, west London was targeted by a group of anarchists in the early hours of Monday morning.

The Metropolitan Police responded to the criticism claiming they responded in the same manner as they would any other incident in London, which angered many crime victims.

Police received reports of the break in at the luxury mansion at 1am on Monday and deployed several dozen officers, including the Territorial Support Group and a specialist negotiator. 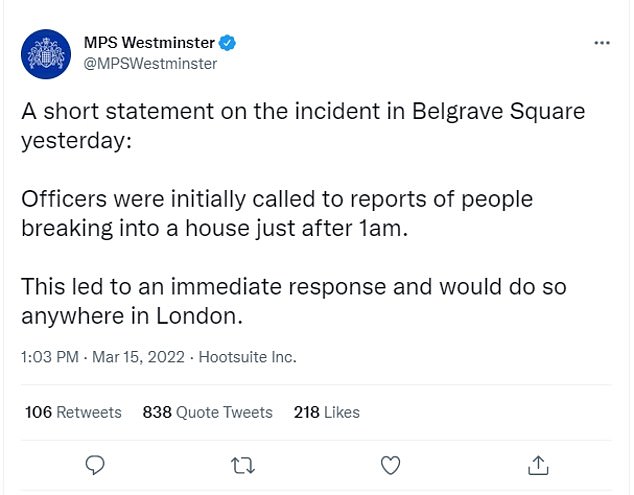 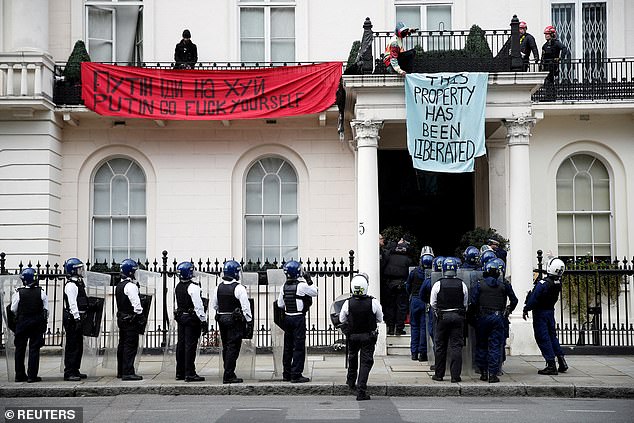 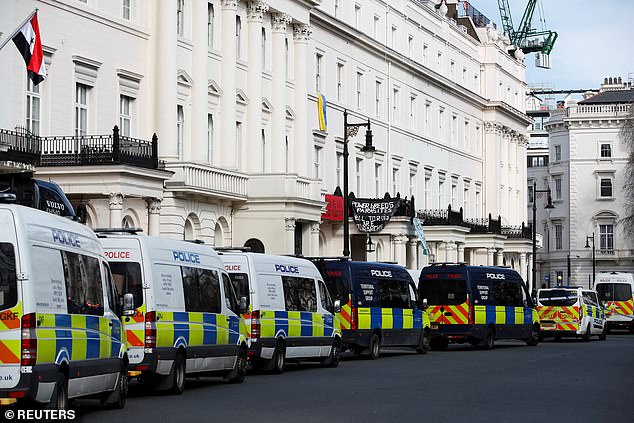 Crime writer David Beckler said he is a novelist who ‘makes up stuff all the time’ but said the Met’s response was ‘too far-fetched’. He said: ‘Nobody will believe it and they’ll just laugh at you’

Dr Alison Webster said someone tried to break down her front door and it took an hour for the first officers to respond, by which time the suspects had fled

The Met also sent a JCB cherry picker to lift an officer up to the mansion’s balcony  to talk directly with the protesters.

However, dozens of people on Twitter rejected the claim and suggested ordinary Londoners who have fallen victim to a break in are lucky to receive any response at all.

One Londoner told MailOnline: ‘The Belgravia Square response stands in stark contrast to the police response to a break-in at my South London home, when three bikes were stolen.

‘No one has so far taken a statement, the crime scene wasn’t investigated and even when I found one of the bikes on an online advert and supplied the police with the mobile phone number of the suspect selling it, I was told the police didn’t have the resources to investigate.

‘I spoke to a 101 officer who suggested I could always go and meet the suspect myself and get two friends to discreetly film him – and dial 999 if anything “went pear-shaped”. DIY policing. I should add, though, that the police, after I wrote to my local MP about the matter and nudged them a bit, have finally launched an investigation.’ 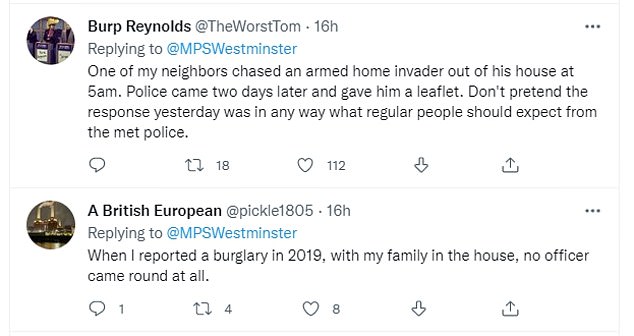 Dr Alison Webster said someone tried to break down her front door and it took an hour for the first officers to respond, by which time the suspects had fled.

Crime writer David Beckler wrote: ‘Mate, I’m a novelist and make stuff up all the time. The secret is to make it believable.

‘This is just too far-fetched. Nobody will believe it and they’ll just laugh at you.

‘Tone it down a bit so at least some people, those from outside the UK, might think, “could be true”.’

The squatters broke into the property at around 1am on Monday declaring the mansion ‘belongs to Ukrainian refugees’.

At least 10 police vehicles and 30 officers were used during the operation to clear the property.

Officers wearing harnesses first tried to deploy a ladder to access the balcony but after the squatters sat in the way to obstruct them, a JCB crane was moved in to lift them up instead.

The squatters call themselves the London Mahknovists, after Nestor Makhno, who led an anarchist force that attempted to form a stateless society in Ukraine during the Russian Revolution of 1917-23.

They hung a Ukrainian flag and two signs which read ‘this property has been liberated’ and ‘Putin go f*** yourself#. 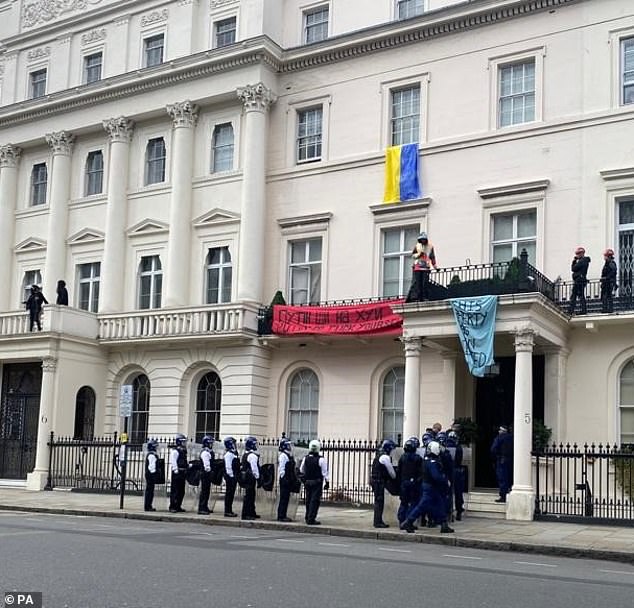 They also danced, played music and one man sang lines from the Dirty Dancing song (I’ve Had) The Time Of My Life.

Mr Deripaska has been described as ‘a prominent Russian businessman and pro-Kremlin oligarch’ who is ‘closely associated’ with the Russian government and President Vladimir Putin.

His wealth is estimated to be £2.3 billion and he has a multimillion-pound property portfolio in the UK which includes the house at 5 Belgrave Square, according to a 2007 High Court judgment.

Records indicate it has not changed hands since and is owned by an offshore British Virgin Islands company.

Mayor of London Sadiq Khan, who holds the Metropolitan Police to account, questioned whether the force’s response to protesters breaking in to the Belgravia home of Oleg Deripaska was ‘proportionate’.

On Monday a series of Tweets was sent from the Met’s @MPSWestminster account defending the action, saying: ‘Officers were initially called to reports of people breaking into a house just after 1am. This led to an immediate response and would do so anywhere in London.

‘Once at the property officers were told the intrusion was for the purposes of a protest. However, squatting in a residential property is a criminal offence. 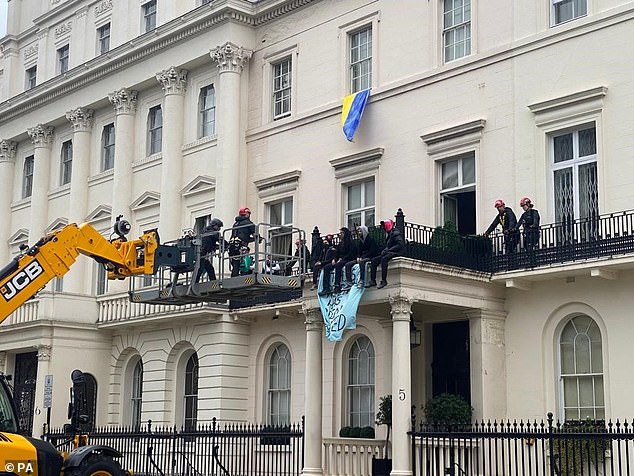 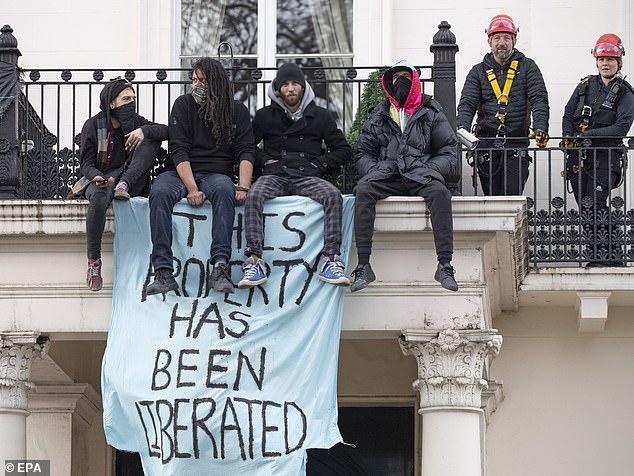 The group of anarchists have claimed to have ‘liberated’ the property

‘In addition, officers faced difficult decisions as they had not independently verified what was taking place inside the property, who was present and whether there were other risks.

‘Over the following hours we deployed the resources necessary to resolve the situation swiftly but safely, both for our officers and the protesters.’

Footage posted on social media showed some of the protesters shouting abuse at the officers as they made their way to the building.

Speaking to LBC’s Tonight With Andrew Marr programme on Monday, Mr Khan said the police response – which included deploying a JCB crane to gain access to the mansion and cordoning off the street – ‘does raise questions’.

‘I’m unclear what the police were responding to because we know no-one’s living there,’ he said.

‘But I’m not sure if there were concerns about any crimes being done to any neighbouring properties, so those are the questions.’

He said he would raise the issue with the outgoing Commissioner Dame Cressida Dick or another senior officer. 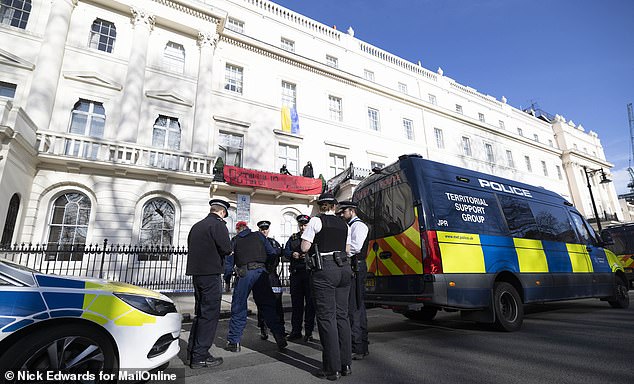