Trump said Obama got into Harvard Law because of ‘f***ing affirmative action,’accused Nelson Mandela of turning South Africa into a ‘s***hole’ and watched a golden shower show in Vegas strip club ‘with delight’, Michael Cohen claims in new book

In the book, Cohen reveals information about a variety of alleged Trump actions and statements that have made headlines since the former reality TV star ran for office, according to the Washington Post, which obtained an advance copy of it.

Cohen writes that he was ‘one of Trump’s bad guys,’ while calling Trump – who he had previously defended to the hilt – ‘a cheat, a liar, a fraud, a bully, a racist, a predator, a con man.’ 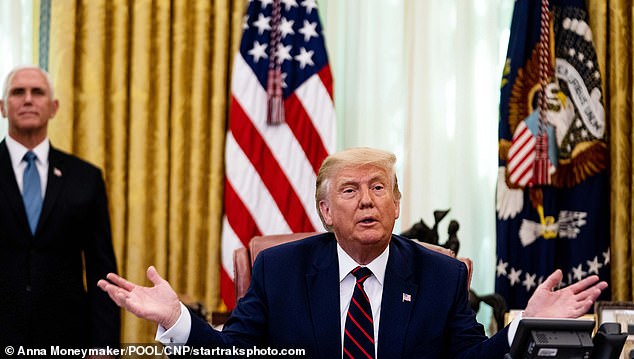 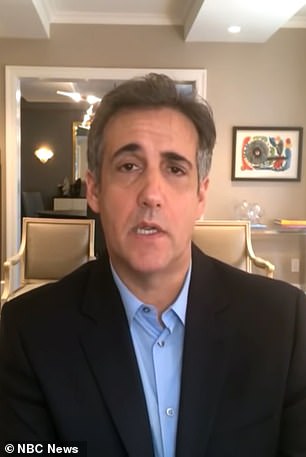 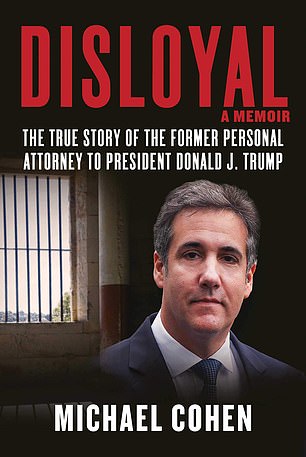 Cohen, who is still serving prison time for federal convictions, wrote of Trump’s ‘hatred’ for Barack Obama and also presented alleged instances of his racist commentary

He wrote that during the 2016 campaign, Trump allegedly said that minorities were ‘not my people’ and that the president also supposedly claimed he would ‘never get the Hispanic vote,’ because, ‘Like the blacks, they’re too stupid to vote for Trump.’

The disbarred lawyer detailed Trump’s ‘hatred and contempt’ of Obama, too.

Cohen revealed that at some point in time, Trump allegedly hired a ‘Faux-Bama’ to star in a video, in which Trump ‘ritualistically belittled the first black president and then fired him,’ CNN reported Cohen as having written.

The news organization, which also obtained a copy of the memoir, said that the actor who played Faux-Bama was not named and there’s no hint of when or why the video was filmed.

But, the book does include a color picture in which Trump can be seen sitting behind a desk opposite a besuited black man with greying hair and an American flag pin on his lapel.

One of the books on Trump’s desk reads ‘Obama.’

Over the years, Trump has been criticized for spreading ‘birther’ statements, which insinuated that Obama was unqualified to be president because he might not have been born in the US – an untrue theory.

Among Cohen’s book’s claims was that Trump said the only reason why Obama had been admitted to Columbia University for undergrad and then Harvard Law School was because of ‘f—ing affirmative action.’

Cohen also wrote that Trump’s ‘low opinion of all black folks’ included him allegedly saying: ‘Tell me one country run by a black person that isn’t a s—hole. They are all complete f—ing toilets.’ 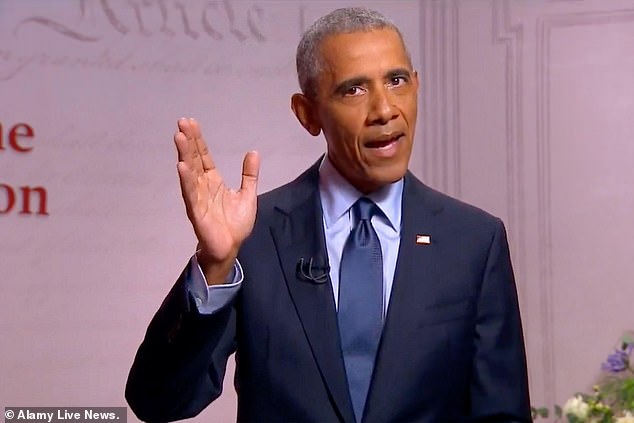 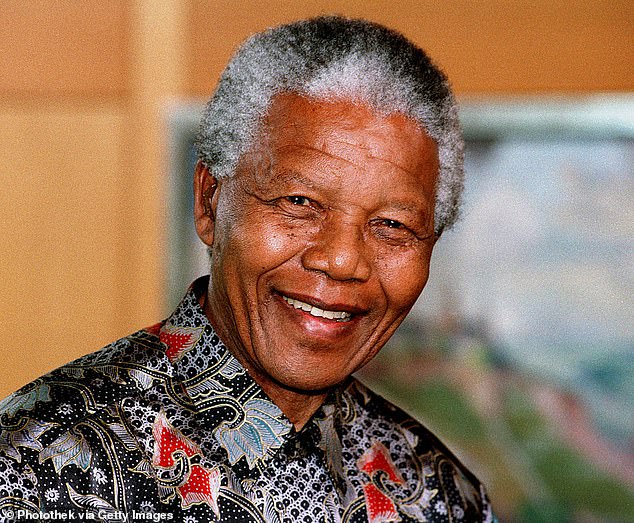 When Mandela died in 2013, Cohen wrote that Trump didn’t think Mandela ‘was a real leader — not the kind he respected.’

Cohen claimed that Trump said ‘Mandela f—ed the whole country up. Now it’s a s—hole. F— Mandela. He was no leader.’

Mandela was a key figure in ending apartheid in South Africa, a practice which divided the country along racial lines.

Trump was slammed in January 2018 after he allegedly said, during an Oval Office meeting about the visa lottery, ‘Why do we want all these people from “s**thole countries” coming here?’ while supposedly referring to Central American and African nations.

Despite all this, Cohen wrote that he never heard Trump utter the ‘N-word.’

In another anecdote that bites from headline-making news about Trump, Cohen wrote about a supposed 2013 visit Trump made to a Las Vegas strip club.

During the visit, Cohen claimed that they watched as one of the strip club performers simulated urinating on another performer, who then pretended to drink it.

According to Cohen, Trump reaction to what they saw on stage was ‘disbelief and delight.’ 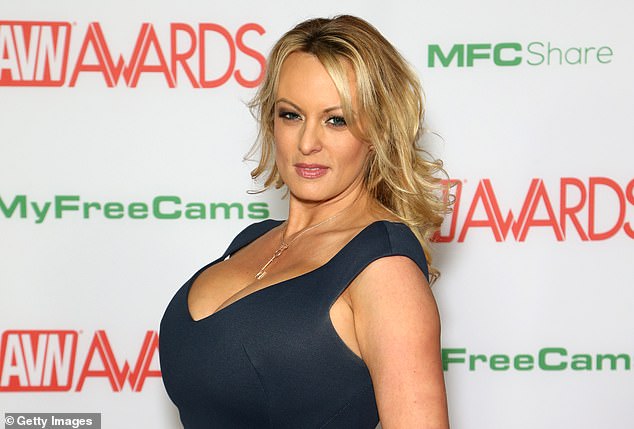 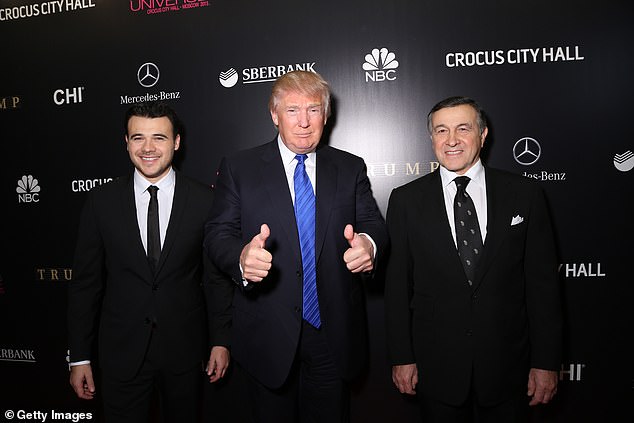 Cohen also said that while there was no collusion with Russia during the 2016 election, Trump (left) had cozied up with President Vladimir Putin (right) to help push along a future real estate development deal in Moscow

In January 2017, word surfaced of a so-called ‘pee tape,’ which was supposedly filmed at the Ritz-Carlton Hotel in Moscow in 2013, when Trump was attending the Miss Universe pageant there.

In the alleged video – described in the Steele Dossier – Trump was said to have watched two prostitutes as they urinated on a bed Barack and Michelle Obama supposedly slept in.

The tape was supposedly made because Russia’s state security agency, the FSB, had the hotel under surveillance and had multiple microphones and hidden cameras in the room.

Cohen wrote of the tape that ‘this claim never occurred, to the best of my knowledge and investigations.’

He did write that he was once approached by someone who claimed to have the tape in 2016, but that when Cohen asked to see a few seconds to determine it was real, the called demanded $20million and hung up. The person never reached out again, Cohen wrote.

In discussing Trump’s supposed admiration of Russian President Vladimir Putin, Cohen wrote that Trump admired Putin’complete control over the country, but that there was no collusion with Russia during the 2016 election.

‘What appeared to be collusion was really a confluence of shared interests in harming Hillary Clinton in any way possible, up to and including interfering in the American election,’ Cohen wrote, also claiming that Trump campaign officials were too disorganized to coordinate with Russia anyway.

Cohen wrote that Trump hadn’t expected to win the presidency and that his purpose in playing nice with Putin was an effort to make money off of a real estate development he was planning in Moscow post-election.

Cohen also devoted portions of his book to Trump’s alleged role in the Stormy Daniels hush money scandal, in which she claimed that she had an extramarital affair with Trump, but was paid $130,000 to keep her quiet prior to the 2016 election.

Cohen admitted to using his own money to pay Daniels off, but said that Trump reimbursed him with ‘fake legal fees,’ according the AP, which also obtained an advance copy of the memoir.

On a more personal note, Cohen included some alleged details about Trump’s much discussed hairstyle.

In the memoir, Cohen wrote that the distinctive hairdo is a ‘three-step’ combover, which was developed as a way to hide what Cohen called ‘unsightly scars on his scalp from a failed hair-implant operation in the 1980s.’

Cohen wrote that he once saw Trump post-shower, when his hair was down.

According to Cohen, Trump’s ‘strands of dyed-golden hair reached below his shoulders along the right side of his head and on his back, like a balding Allman Brother or strung out old ’60s hippie.’

While making all these alleged revelations about his former client, Cohen also wrote: ‘I care for Donald Trump, even to to this day.’

He also noted: ‘and I had and still have a lot of affection for him.’

Cohen wrote that his support of Trump for president was due to thinking ‘Trump was a visionary with a no-nonsense attitude and the charisma to attract all kinds of voters.’ he writes.

But, wrote that he really wanted Trump in the White House ‘because I wanted the power that he would bring to me.’

Cohen wrote in the memoir that things that Trump has been maligned for after he became president weren’t obvious until after he was elected.

‘Locking up your political enemies, criminalizing dissent, terrifying or bankrupting the free press through libel lawsuits — Trump’s all-encompassing vision wasn’t evident to me before he began to run for president,’ Cohen wrote.

‘I honestly believe the most extreme ideas about power and its uses only really took shape as he began to seriously contemplate the implications of taking power and how he could leverage it to the absolute maximum level possible.’

In a statement to the Washington Post Saturday, White House press secretary Kayleigh McEnany said that ‘Michael Cohen is a disgraced felon and disbarred lawyer, who lied to Congress. He has lost all credibility, and it’s unsurprising to see his latest attempt to profit off of lies.’

The White House, meanwhile told the AP that the memoir amounted to ‘fan fiction.’

Cohen ‘readily admits to lying routinely but expects people to believe him now so that he can make money from book sales,’ White House spokesman Brian Morgenstern said in a statement to the news agency.

‘It’s unfortunate that the media is exploiting this sad and desperate man to attack President Trump.’