Mick Fanning, the group text and the mud army fighting for the Northern Rivers

Taking out his phone, Mick Fanning looked at the group video message from friend Joel Parkinson in the middle of the rising floods.

The former world surf champion, known as Parko, was astride his jet ski outside the submerged Tumbulgum Tavern, near Murwillumbah in the Northern Rivers of NSW.

“That’s the pub, boys,” Parkinson said on the first Monday afternoon of one the nation’s biggest flood disasters. “I’ve literally rescued cats, dogs, and 10 to 15 people on the ski. It’s been hectic, just picking people up and going to higher ground.” 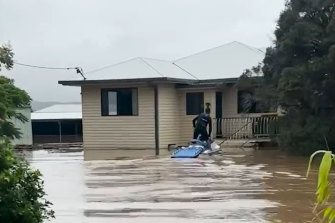 Joel Parkinson and Api Robin ob a jet ski checking out a house at Tumbulgum, near MurwillumbahCredit:Joel Parkinson

The next message to the group chat, an emotional Parkinson and jet ski partner Api Robin, husband of comedian Celeste Barber, came across a seemingly empty, flooded home, only for a small boy wearing a life jacket to open the door.

“Nobody flinched,” Fanning said from his Gold Coast home. “They said to Parko, we’re grabbing our skis and boats and coming with you tomorrow.”

From that moment, the three-time world surfing champion Mick Fanning and others in the group chat, surfers from Currumbin to Byron Bay, knew what they would do.

The group text message is a basic social unit of 21st century life, usually exclusive and small in numbers. This message, however, snowballed and morphed into a private search and rescue team involving hundreds of volunteers and community leaders and requiring a reluctant leader Fanning to negotiate directly with NSW Premier Dominic Perrottet for help. 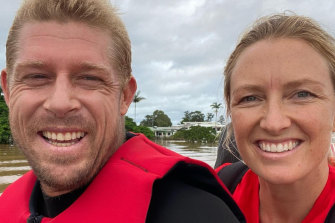 One of those enlisted, David Gyngell, the former Nine Entertainment chief executive, and a surfing friend of Fanning, said the Northern Rivers community stepped up to meet the challenges posed by the disaster.

“This flood came hard and fast,” Mr Gyngell said. “I think the scarce local resources were targeted understandably at Lismore, which was devastated.

“I’m respectful of (NSW Premier) Dominic Perrottet and (federal Defence Minister) Peter Dutton that they started out slowly, but they look to be coming home strong now. I know that some people that were inundated may have a different view.

“Anyway there were a lot of gaps, and people gathered around Mick’s group, as well as Norm Black, the TripADEAL founder, and many other smaller groups up and down the coast to fill those gaps.

“I’ve been privileged to have seen some pretty impressive people, but someone like Mick, a person with no formal leadership training, to see the community organisers and volunteers follow him was pretty special.”

Fanning said that the second day went from dark to dark for the rescuers. 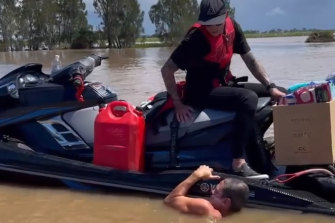 “There was some super dangerous areas,” he said.

“And a lot of stuff to deal with in the water with eddies, logs, furniture, shipping containers, animals, cows. You had to be on all day, it was dangerous, and even when getting into people’s houses to get them off boats and skis we were getting dragged around, because there was so much water moving through there.”

The rescuers got to Murwillumbah and realised from community leaders that the evacuation centre had nothing. The hospitals had nothing. Aged care homes bereft.

The further they ventured from their Tweed base they realised that people were without food, water and essential medication.

The group chat evolved, absorbing volunteers plugged into their communities, strategising where the greatest help was required, as well as sourcing goods and services.

It was almost like an emergency Airtasker operation. Hundreds of people, 25-35 jet skis, 20-25 boats, vehicles and trucks and four choppers were working across the entire Northern Rivers.

For the next five days, the private rescue operation acted largely independently. Fanning went public with their activities to help bankroll the operation for supplies. Then Mr Perrottet got in touch with Fanning and asked what was required in the area, with NSW Police Deputy Commissioner Mal Lanyon clearing a number of roadblocks for the group.

The Fanning group relinquished their rescue and recovery activities to police last weekend, although many volunteers are still helping with clean up work in the Northern Rivers communities.

Norm Black, the TripADEAL founder, who lives in the Byron Shire hinterland, used his national network, as well as local business and sport contacts, to assist with flood rescue and relief operations. He said the lack of urgency and central coordination at a government level had been very concerning for him.

“When we first went into South Lismore there were people thirsty and starving. It was beyond anything you could imagine,” he said.

“We choppered in 4500 bottles of water through (former Socceroo) Tim Cahill’s brother Chris. Last Saturday, with a number of Lismore blokes, Darren Perkins and Chris Haywood, we organised 2000 sausage sangas and 1000 steak sandwiches and every one of them went.

“We got medication like asthma puffers, insulin pens and more into a lot of areas by chopper.

“And all I could think was surely in this country we can do better than this.“

Some of the the community teams and rescuers are now suffering from the shock of the past fortnight.

On Wednesday, Parkinson said that rescuers including himself were dealing with the aftermath. “I get emotional even talking about it now,” he said. “I had to get away for a surf trip to help me out a bit. There are others receiving counselling.”

Fanning said the recovery planners will need to address the mental health issues arising from the disaster. He said victims’ families and friends, the flood survivors and rescuers would need support.

“I can only speak for myself,” he said. “On Sunday. I pretty much just curled up in a home and just cried all day.

“And I feel like I’ve got tools to deal with that sort of stuff, so it’s going to be a long road back, mentally and physically and emotionally.”

Mr Gyngell said the death toll would have been higher if the community volunteers had failed to step into the breach, and the government needed to acknowledge their efforts, as well as the difficulties that they had been placed under by systemic failings.

“I’m not just talking about Fanning and Parko, but the blokes and women with their tinnies, what they call the mud army volunteers up here, after two years of COVID, for a community to respond this way to make their world a better place is quite inspiring.”