Millionaire entrepreneur accused of trafficking marijuana from his private jet

He expanded his new spa company, became a partner in local bars and bought up rural northern California land, court records show. But what really brought in the profits, federal authorities say, were the California fields that produced marijuana for sale across the US. 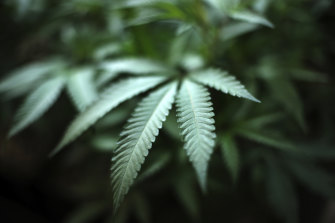 While he appeared to be a successful businessman on the surface, Justin Magnuson is accused of running a marijuana trafficking operation out of his private jet. Credit:AP

Magnuson, 39, has multiple college degrees, was partly raised by a former Drug Enforcement Administration agent and was once named one of Dallas’ most eligible men.

Now he sits behind bars awaiting trial in North Texas, accused of being a leader in a large marijuana trafficking conspiracy.

Authorities say Magnuson and other defendants transported marijuana inside soft drink vending machines in semi-trailers and then used his private jet to fly the cash proceeds back to the west coast. Magnuson, who had been attending UCLA, laundered drug profits through his various Dallas businesses, including It’s a Secret Med Spa and a bar named Vice Park, prosecutors say.

Magnuson gave his co-defendants shares in his spa chain in exchange for drug-related cash, said Ryan Slicker, an Irving police investigator assigned to a DEA task force, during a hearing.

A lawyer for It’s a Secret Med Spa said Magnuson stepped down in August or September and is no longer affiliated with the company.

When agents raided Magnuson’s penthouse Dallas condo this summer, they found a pile of cash; an “arsenal” of guns; a bulletproof helmet and body armor; and a “go-bag” packed with survival guides and gear, court records show. Slicker called it a backpack “loaded and ready for him to flee”.

A federal judge ordered in August that the brothers remain in custody pending trial.

“Each of them has a go-bag,” said Assistant US Attorney Heather Rattan during their detention hearing in Sherman. “Justin’s was more sophisticated than Clay’s was, but each of them have something that they can grab and go and get out quickly.”

Defence attorneys for the brothers told the judge their clients’ marijuana growing operation in California was legal.

One of Justin Magnuson’s lawyers, Mike Uhl, said his client pleaded not guilty and is presumed innocent. He said he and his co-counsel are “busy obtaining and reviewing the evidence the government claims demonstrates Justin’s guilt.”

“We will evaluate the evidence and conduct our own independent investigation,” Uhl said on Friday.

Attorneys for Clay Magnuson and Edmonds declined to comment.

Since California legalised marijuana in 2016, the state has become a major source of illegal growing and trafficking operations, taking business from Mexico’s drug cartels. Cannabis is now legal in 35 states for medical use and in 15 states for adult recreational use, but remains illegal under federal law.

Police have seized multiple shipments of California-grown marijuana on highways and in airports. California authorities said last year they seized more than $US1.5 billion worth of illegal marijuana, roughly equal to the state’s legal cannabis market.

The DEA began investigating Magnuson’s drug trafficking organisation in 2018 after learning about the Northern California properties, court records show. Rattan said the conspiracy operated for 10 years and involved California, Nevada, Texas, Oklahoma and New York, with hundreds of acres of land and thousands of pounds of marijuana.

Police have seized at least $US5 million in drug proceeds from the organisation, according to court records.

Magnuson is also under federal investigation on suspicion of health care fraud related to his former diagnostic company, according to court testimony in the case.

Justin Magnuson achieved business success at a young age with a company that pioneered technology to monitor sleep patterns and other functions. Alliance Family of Companies, based in Las Colinas, provided neurodiagnostic, cardiac and sleep testing services.

It began around 2011 when a sleep lab company Magnuson started merged with another sleep diagnostics company to become Alliance. As CEO of Alliance, Magnuson developed in-home testing with electroencephalogram devices, which detect electrical activity in the brain using electrodes attached to the scalp.

He employed the same technology for at-home cardio-diagnostic testing and monitoring. Alliance said it provided diagnostic programs to hospitals, physicians and other health care providers.

By 2016, the company was earning more than $US50 million in revenue and was considered the “leading provider of neurological, cardiological and sleep diagnostic services in the United States,” according to Magnuson.

The following year, federal authorities began investigating Magnuson’s ties to the alleged marijuana smuggling organisation. They discovered trucks carrying California marijuana to Texas, where it was unloaded and taken to stash houses, court records say. Cash from the drug sales was then loaded into the soft drink machines for transport back to California.

Police stopped two of the trucks on their return trips and seized cash, Slicker said. One was pulled over in Abilene in February 2019 with about $US500,000. Another truck with about $US1 million was stopped in September 2019, according to court records.

Magnuson then began flying the cash proceeds in his private jet, Slicker said. He estimated the group averaged between $US3 million and $US6 million in profits annually.

Steve Lambert, who was Alliance’s controller, said that he was “shocked” to hear the allegations and that Magnuson treated him well.

“He was a very successful businessman,” he said. “I can’t explain it … I never saw that coming.”

Slicker testified that Magnuson was responsible for manufacturing, transporting, distributing and storing the drug. He also laundered the drug proceeds using his businesses or those of his friends, Slicker said. Magnuson became involved when he bought two Northern California properties, each between 30 to 40 acres, for growing the marijuana, prosecutors say.

Investigators have audio recordings of Magnuson discussing money from marijuana sales as well as “the enforcement of payment obligations,” prosecutors said.

He stored the cash in his Dallas home and also held meetings there to discuss growing operations and distribution, authorities said. Magnuson lives in a $US3 million penthouse apartment atop a residential tower, court records show. He was arrested in August outside his home.

The “go-bag” agents found in his apartment contained, among other things, survival guides, a “special warfare book,” a shovel, fire starters, a change of clothes and a bulletproof plate, court records show.

Agents found in the home more than 20 firearms, including pistols, shotguns and “assault-style” rifles like an AR-15 and AK-47, Slicker said. Also taken were five sets of body armor, about $US25,000 in cash and a credit card with no spending limit, he said.

Authorities say Magnuson’s net worth is estimated to be more than $US13 million.

Slicker said Magnuson was a flight risk because he’s travelled outside the country over 250 times and has vast resources, including 24-hour access to his banker. He owns a home in Costa Rica as well as residences across the US, including in California and Colorado, Slicker said.

Magnuson was recorded saying he “could be in Mexico in two hours,” court records show.

Rattan also presented evidence of what she said was Magnuson threatening violence in his attempt to collect on a drug debt. In a phone call, he told co-conspirators he would “send muscle” if a person began avoiding them. “If people start skirting me, I’m sending somebody to break their —-ing kneecaps, I’m not —-ing around, no one is stealing from me,” he said in the phone call that was played for the judge.

Uhl suggested that his client was just “venting” and that it wasn’t clear from the recording what the debt was for.

But Magistrate Judge Christine A. Nowak ruled in August that Magnuson should be detained until trial, citing “his ability to travel internationally, his expansive wealth, ownership of several residences, ready access to a private jet, and his assertion that he can get to Mexico in the span of a few hours.”

Lambert said that Magnuson invested in bars but that he never suspected any involvement in drugs.

“I don’t know why he would do something like that,” Lambert said. “He didn’t need the money.”

Clay Magnuson, 26, also is charged in the case. The DEA says he works for his brother and was sent to California to learn how to grow and harvest marijuana. He lived on his brother’s property during the grow season, Slicker said.

Slicker testified that Clay Magnuson transported hundreds of thousands of dollars between Austin and Dallas and that he had delivered about $US50,000 in drug money to an undercover officer. He also said Clay had travelled outside the US more than 45 times and was in Mexico two weeks before his arrest.

“Slicker testified that he believed if released Defendant could ‘get on a private jet and disappear,’” court records said.

When Clay Magnuson was arrested after leaving his downtown Dallas apartment this summer, police found a rifle in the back seat, a backpack with a loaded pistol and his passport, court records say.

“I found that highly unusual because most people don’t carry their passport with them everywhere they go,” Slicker said at the detention hearing.

A search of Clay Magnuson’s apartment turned up a “stack of bills” and multiple firearms, court records show. His attorney, Todd Shapiro, noted that his client has a concealed carry license and that nothing found in his car or apartment was illegal. Like his brother, Clay Magnuson also received a master’s degree from SMU, Shapiro said.

His mother, Sally Magnuson, talked about Clay’s “strong leadership skills and giving spirit” during the detention hearing. She also said she was aware of her son’s involvement in the marijuana growing business but didn’t ask questions. She said Clay has never been in trouble.

The former high school and college quarterback from Houston got a job with the Deloitte accounting firm right out of graduate school. He quit the job about six months later to work for his brother’s chain of spas. The business had as many as 10 locations and 100 employees at one point, according to testimony.

But prosecutors said they have “multiple recorded conversations” in which Clay Magnuson discusses his involvement in the drug conspiracy.

“Clay is part of a large-scale, multi-state marijuana grow operation utilising multiple properties in California,” Assistant US Attorney Lesley Brooks said in a filing. “The organisation exports large quantities of the marijuana to Texas, launders large amounts of money and is willing to use violence to collect debts.”