Prime Minister Boris Johnson is to hand a cabinet minister the power to veto the removal of statues and monuments to help fight back against woke campaigners and ‘bullying’ local officials.

Housing Secretary Robert Jenrick would have the final say on what statues and memorials could be removed from public view.

The decision currently sits with the local councils.

If the move goes ahead, it would mark the Government’s first legal intervention in the wake of a public reconsideration of Britain’s monuments and statues.

Many statues of figures with alleged links to slavery have been targeted by Black Lives Matter protesters since the killing of black man George Floyd in the US. 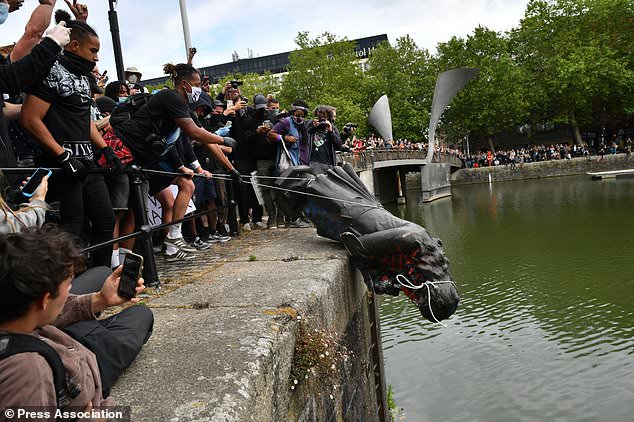 A bronze memorial to Edward Colston in Bristol was pulled down during a Black Lives Matter protest on June 7, before being dumped in Bristol Harbour 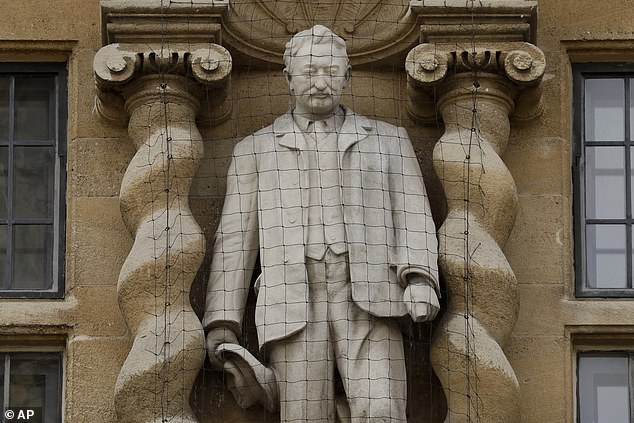 In June, the governing body of Oxford University’s Oriel College said it wanted to remove the controversial statue of Cecil Rhodes (pictured)

Since Edward Colston’s statue was thrown into Bristol Harbour, there has been a wave of attacks from vandals on various monuments across Britain.

A statue to Winston Churchill was defaced with the words ‘was a racist’ and ‘f*** your agenda’ written underneath the memorial to the war time PM in Westminster Square, London.

Slave trader Robert Milligan’s was covered with a shord and the message ‘Black Lives Matter’ was placed on it in West India Docks amid calls for it to be taken down. It was later removed by Tower Hamlets Council. 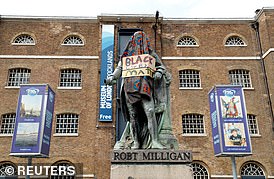 Less than a year after it was erected, ‘Nazi’ was scrawled underneath a statue of Nancy Astor, the first woman to take a  seat in Parliament, in Plymouth.

A monument to 19th-century politician Henry Vassall-Fox, the third Baron Holland, was left splattered with red paint in Holland Park. A cardboard sign reading ‘I owned 401 slaves’ was perched in the bronze statue’s arms, with the number painted on the plinth alongside red handprints.

A Grade II-listed monument to Admiral Lord Nelson, Britain’s foremost naval hero, which stands in the grounds of Norwich Cathedral, was sprayed with a black ‘V’ in the middle of a circle – an anarchist symbol.

In Kent, a former councillor wrote ‘Dickens Racist’ outside a museum dedicated to the beloved 19th century author. Letters sent by the Oliver Twist author showed he wished to ‘exterminate’ Indian citizens after a failed uprising.

A statue of Civil War leader Oliver Cromwell in Wythenshawe Park, Manchester, had the words ‘Cromwell is a cockroach,’ ‘f*** racist’ and the Black Lives Matter acronym ‘BLM’ scrawled across it last month. Thousands of people were massacred during the Cromwellian conquest of Ireland.

BLM was also scrawled across the Worcester Civil War memorial in Royal Park.

Protesters in Bristol tore down the statue of slave trader Sir Edward Colston on June 7, on the same day a memorial to Winston Churchill in London was defaced with the words ‘was a racist’ written on its plinth underneath.

It prompted a wave of statues being targeted with graffiti or being attacked during protests, culminating in some statues, including ones of Nelson Mandela and Churchill’s, being covered up to be protected from vandals.

Other monuments have since been toppled by protesters or removed by local authorities or property owners.

The Topple the Racists campaign launched a comprehensive list of statues it wanted to see removed as it believed the names behind the monuments held racist beliefs.

It led to Oriel College at Oxford University voting to remove a statue of Cecil Rhodes, a colonialist politician in southern Africa in the 19th century.

Culture Secretary Oliver Dowden this week called on Britons to be proud of the nation’s history rather than ‘trashing’ it, saying it was a sign of weakness to seek to ‘eradicate’ history.

He said of cultural institutions: ‘Of course they should be talking about their history, I always say ‘keep stuff in place, keep your monuments in place and use them to explain our history, don’t hide it away’.’

Mr Dowden added: ‘We should stand up for our cultural values.

Mr Dowden acknowledged there were ‘dark moments’ in the history of the UK but people should also celebrate its strength.

He added: ‘Clearly slavery was a terrible stain on the British Empire, but it is equally true that we abolished slavery – we were one of the first nations to abolish slavery – and actually it is the case that the Royal Navy spent huge amounts of our national wealth, according to some estimates up to 2 per cent of our national wealth every year, patrolling the North Atlantic to stop the evils of the slave trade.

Tower Hamlets and Lambeth councils in London are said to be the latest authorities to consider removing statues and memorials from their boroughs, The Telegraph reports.

Prime Minister Boris Johnson said in June: ‘We cannot now try to edit or censor our past.

‘We cannot pretend to have a different history.

‘The statues in our cities and towns were put up by previous generations.

‘They had different perspectives, different understandings of right and wrong.

‘But those statues teach us about our past, with all its faults.

‘To tear them down would be to lie about our history, and impoverish the education of generations to come.’

After Sir Winston Churchill was covered up in June to protect it from further attacks, historian and bestselling author Tom Holland said many Britons would regard the move as ‘sinister’.

Mr Holland, 52, also claimed the sight of locals in Poole, Dorset, needing to defend the statue of founder of the Scouting movement Robert Baden-Powell ‘does not do anti-racism campaigners any favours.’

Scouts from all around the country arrived to defend the statue of Baden-Powell after it was added to a ‘topple the racists’ list compiled by Black Lives Matter supporters. 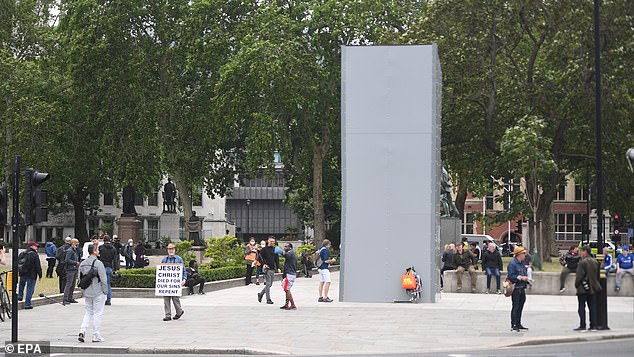 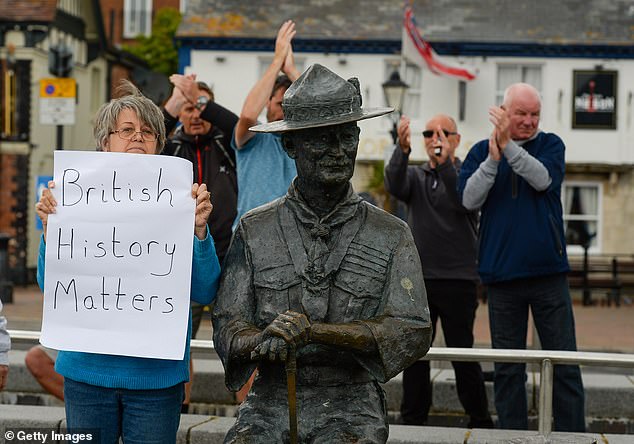 Mr Holland, 52, also claimed the sight of locals in Poole, Dorset, needing to defend the statue of founder of the Scouting movement Robert Baden-Powell ‘does not do anti-racism campaigners any favours’

Speaking exclusively to MailOnline, Mr Holland said: ‘The sight of Churchill boarded up is to large numbers of Britons very sinister.

‘As is the sight of scouts defending Baden Powell, it doesn’t do anti-racism campaigners any favours. It will turn people against them.’

The historian, who took no issue with the toppling of the statue of slave trader Colston, added that protesters were at risk of looking ‘ridiculous’ if they widened their focus to too many British national figures. 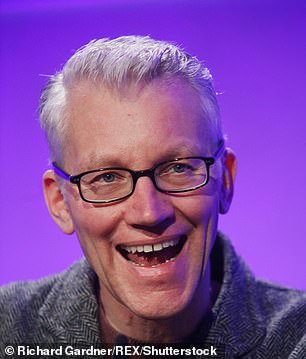 ‘I think the danger is for anti-racism campaigners is that the Colston statue, as a one-off, as a bracing way of getting people to talk about slavery and the legacy, it reverberated profoundly, but as so often happens with tidal waves of moral outrage they end up turning either sinister or ridiculous.’

After the Colston statue was toppled, other statues including those of Lord Horatio Nelson, King James II, Charles I, Oliver Cromwell, Francis Drake and Sir Robert Peel were targeted.

Mr Holland said anti-racism campaigners risked turning ordinary Britons against them by widening their focus to other statues and historical figures.

‘I am generally not enthused by the idea that groups of people should feel themselves empowered to defacing or vandalising statues willy nilly,’ he said.

‘Purely on the level of strategy, people who want a debate about the inheritance of slavery and racism in Britain need to think tactically and strategically.

‘The way that this has spiralled out of control will play into the hands of people who don’t want to have a discussion about it.’

He said last night, ‘In recent months, Policy Exchange has documented more than 100 cases where aspects of our shared past – from statues to street names and what is taught in schools and universities – are being erased, without genuine debate and with very little consultation with the public who pay the bills.

‘For example, it was shocking to see a statue in Bristol be torn down against the will of the only black mayor of a large British city.

‘We should recognise changes in public sentiment, but our response in a democracy must not be driven just by those who shout loudest.’