For two months the inquiry into hotel quarantine has been leading to this point; a political reckoning where government ministers responsible for a program that unleashed a second wave epidemic upon this state are held to account.

Now that we are here, two things are clear: a basic question about the program will remain unanswered, and ministerial responsibility in Victoria – at least in any traditional sense of what it is supposed to mean – was dead long before this virus struck. 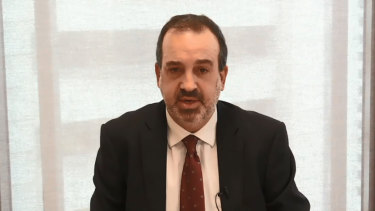 Jobs Minister Martin Pakula says he was not consulted about Victoria’s hotel quarantine — despite briefly being the minister responsible.Credit:Video grab

Whose idea was it to use private security guards in quarantine hotels?

According to Lisa Neville, Victoria’s Police Minister responsible for the governance of our emergency services, and Martin Pakula, the Minister of Jobs whose department contractracted the security companies, they were not consulted, nor told about the final decision.

Nor, apparently, did either of them seek to find out.

Neville and Pakula have served a combined 32 years in Parliament including 16 years as ministers in some of the state’s most senior and complex portfolios.

Yet, on March 27, the day state and territory governments were forced to respond urgently to a National Cabinet decision to subject returned travellers to mandatory quarantine in hotels, no one sought their input about how this might work.

Called on Wednesday as the first government ministers to testify before the inquiry, Pakula and Neville recounted how they learned of the quarantine program. In each case, they were informed as a courtesy after decisions had already been made. 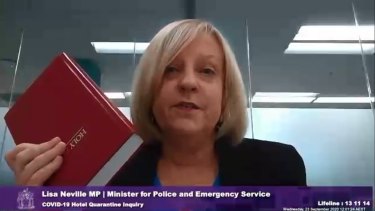 By the book: Police Minister Lisa Neville swears on an upside down bible that she doesn’t know who made the decision to use private security guards.Credit:Video Grab

Pakula said he was first told about the program in a telephone conversation with the secretary of his department, Simon Phemister. At that stage, their department was to be the lead agency for the program. This would have made Pakula the minister responsible for it.

Instead, for reasons no one has ever explained to Pakula, a decision was taken as early as the next day to shift responsibility for the program to the Department of Health and Human Services.

Pakula said the decision was "seemingly determined at a bureaucratic level". Did this raise any concerns? "Not particularly, other than I was aware that Mr Phemister was a bit put out by it."

Putting the feelings of Phemister to one side, what does this tell us about how decisions are made by the Andrews government? If a senior minister is not consulted about decisions that directly affect their portfolio responsibilities, what exactly are they there for?

Neville said she was first told about the hotel quarantine program by someone from within the Department of Premier and Cabinet. She said both she and police chief Graham Ashton learnt about the plan to enforce the program with private security guards rather than police from Emergency Management Commissioner Andrew Crisp.

How did Crisp know? He disputes he did. Whose plan was it? If success has 1000 fathers, the hotel quarantine debacle was apparently delivered by stork.

Why weren’t the Victoria Police Chief Commissioner and Police Minister consulted on a decision affecting the public safety of all Victorians? Neville says Ashton should have been. 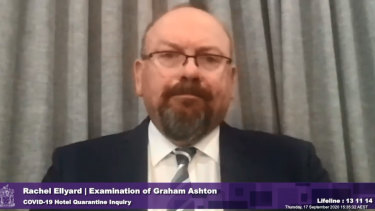 If Neville was troubled by this she gave no outward sign. According to her evidence, she took no steps in the days that followed to elicit further information about what was going on.

"I did not participate in any other meeting, briefing or discussion during 27, 28 or 29 March about the role of Victoria Police in the HQP [hotel quarantine program]," her statement reads.

One thing on which Pakula and Neville agreed is that responsibility for hotel quarantine belonged to Victoria’s beleaguered DHHS. The next witness before the inquiry is Minister for Health Jenny Mikakos.

Perhaps ministerial responsibility is not dead; just misunderstood. In Victoria, the responsibility of all ministers is to ensure someone else carries the can.