Ministers are drawing up plans to fine Europe-bound lorry drivers £150 if they enter Kent without a negative Covid-19 test in a bid to keep borders flowing smoothly post-Brexit.

Around 60 per cent of lorry drivers, or 2,400 a day, are understood to be arriving at the UK-EU border without having taken a test, despite the Government setting up 34 testing centres for them across Britain outside of Kent.

Officials believe there are too many drivers not getting tests and, combined with new post-Brexit trading rules, fear it could fuel snarl-ups in the coming weeks when traffic crossing the Channel is expected to significantly rise.

But the Road Haulage Association said the new measure under consideration would penalise foreign drivers ‘for nothing more or less than not having English as a language and so not being aware’.

The volume of lorries passing through is currently lower than normal partly due to businesses stockpiling ahead of December 31, when the UK fully left the EU. 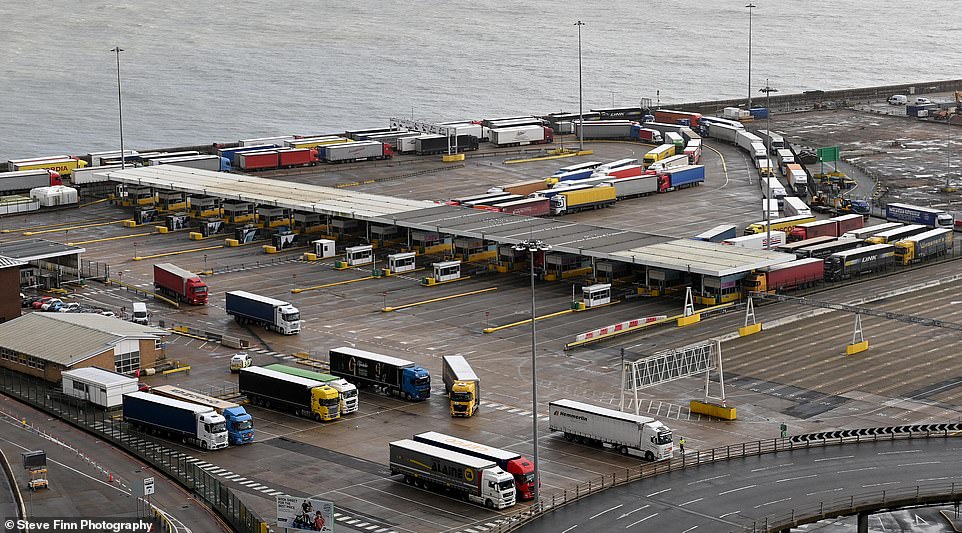 Lorries are pictured at the Port of Dover ferry terminal in Kent today, as ministers draw up plans for a new fines regime 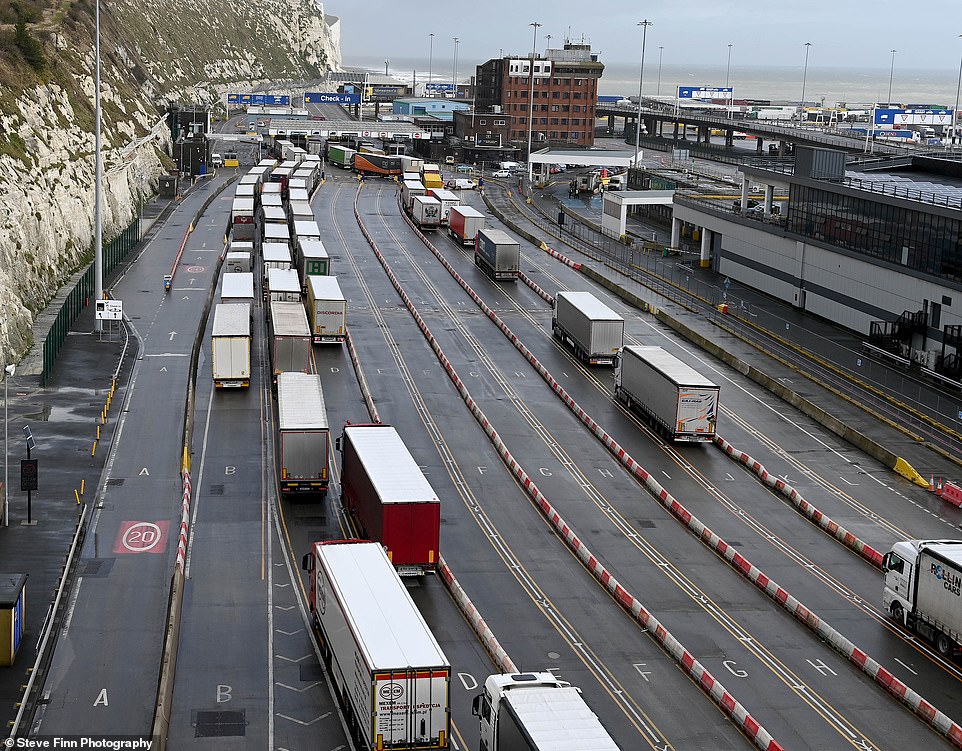 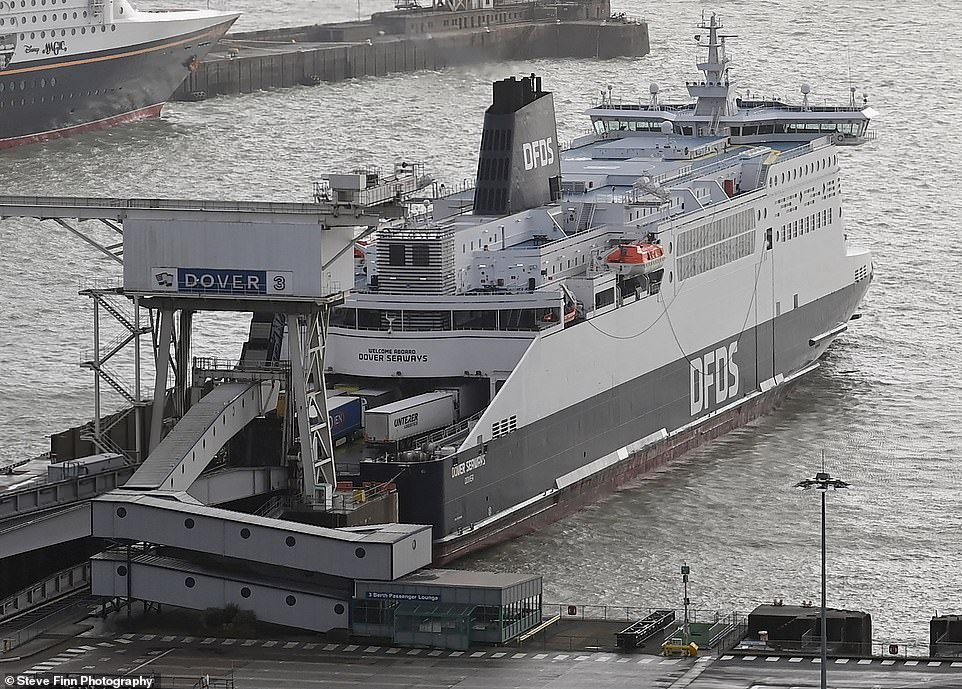 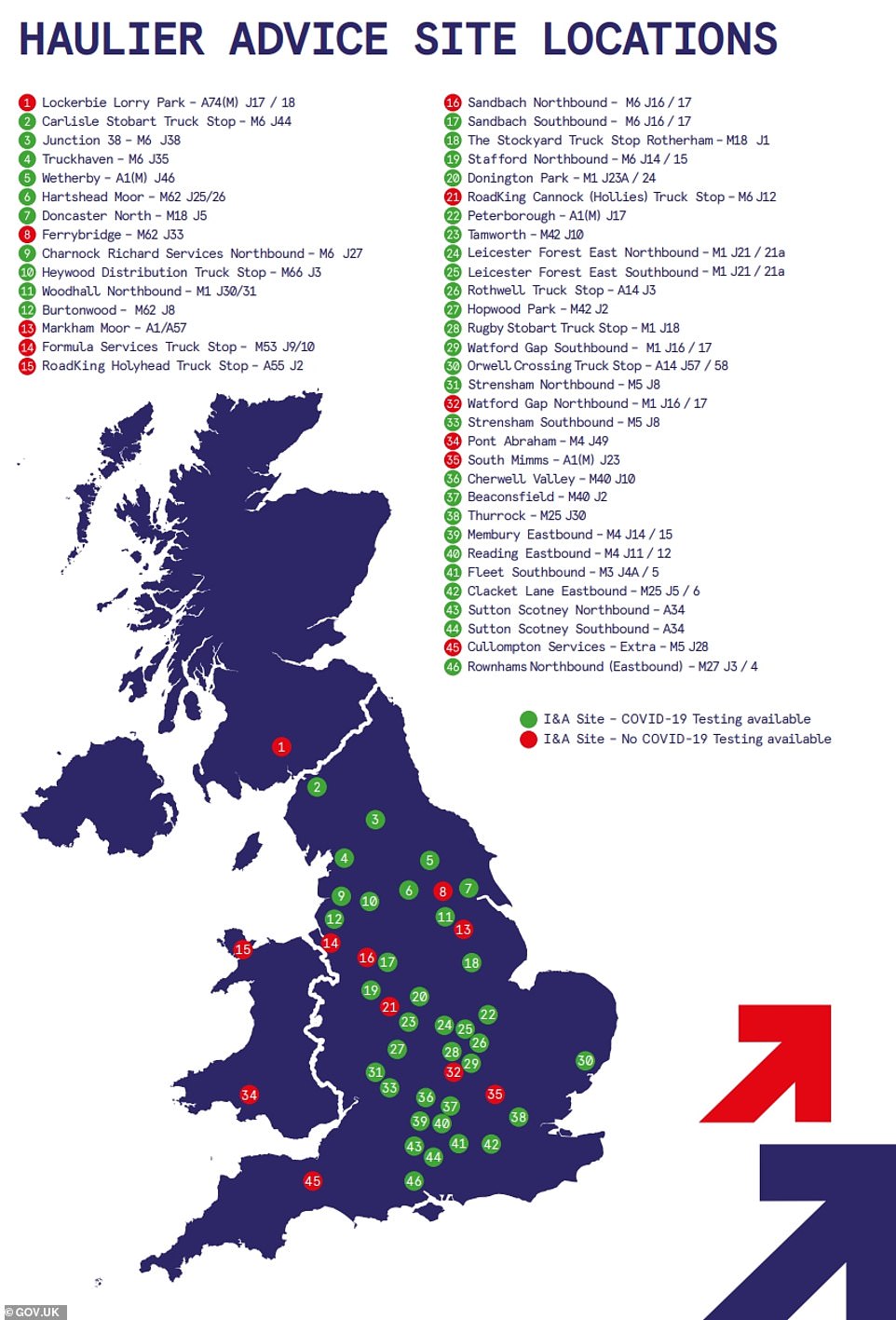 Predicted tailbacks as a result of the switch to new trading terms have so far failed to materialise.

The requirement to test negative before crossing the Channel came in after France banned all arrivals, including hauliers, after the Kent mutant strain of Covid-19 emerged last month.

It led to chaos and tailbacks of thousands of lorries, with some hauliers having to spend Christmas Day in their cabins. Under pressure from fellow European leaders French president Emmanuel Macron lifted the outright ban.

But lorry drivers must still show proof of a negative test taken within 72 hours or be blocked from crossing. Last week France extended the condition indefinitely.

Under the rules hauliers can take a rapid ‘lateral flow’ test which produces results in under an hour.

Department of Transport officials have set up 34 centres across the country where hauliers can get advice and a test before heading back towards Kent after dropping off their cargo. 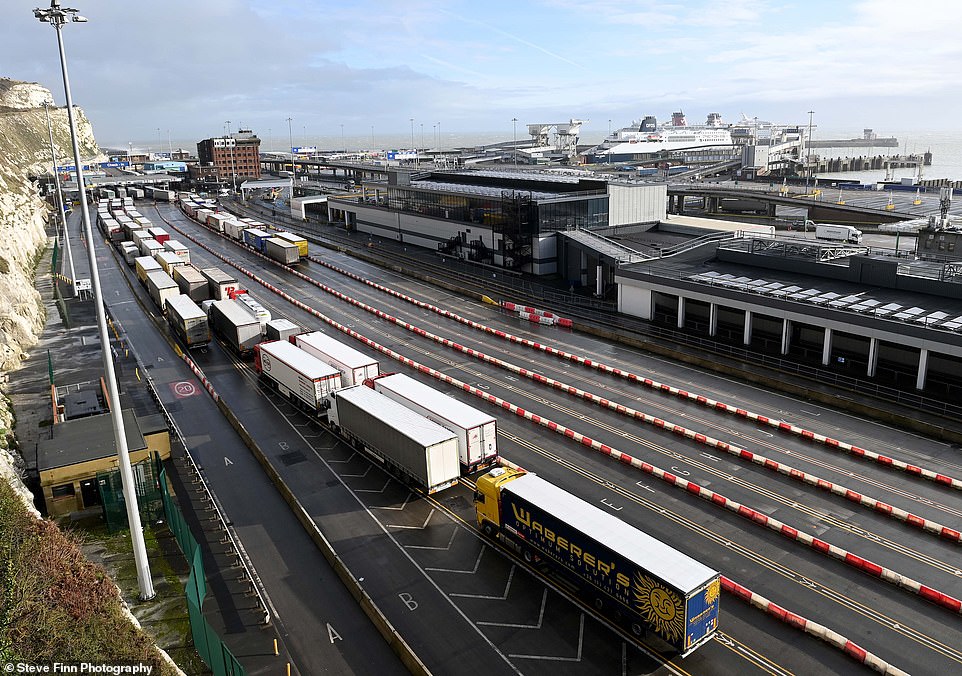 2,400 lorry drivers a day are thought to be arriving at the UK-EU border without having taken a test. Dover is pictured today 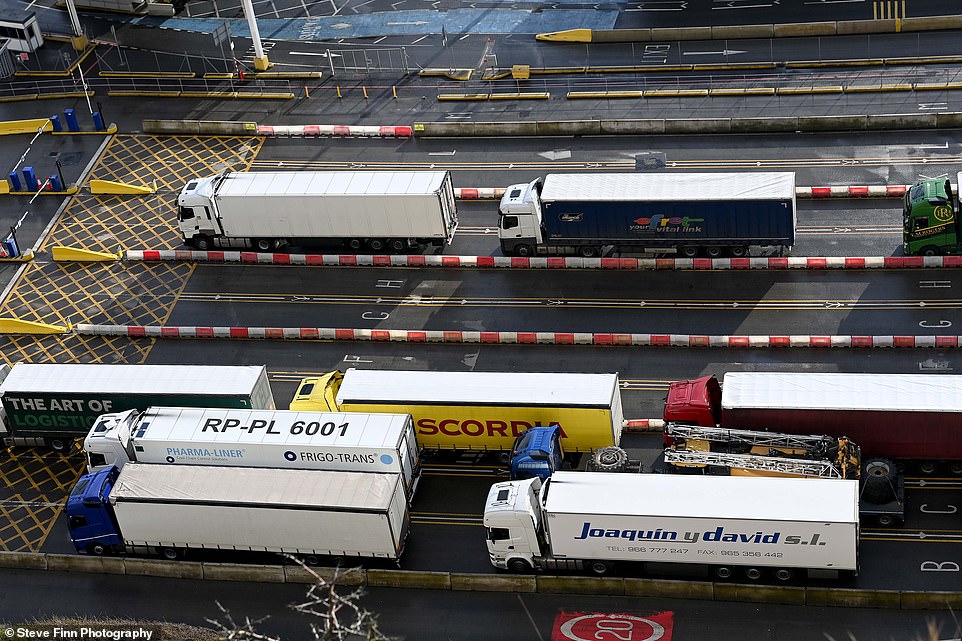 The volume of lorries passing through is lower than normal partly due to businesses stockpiling. Dover is pictured today 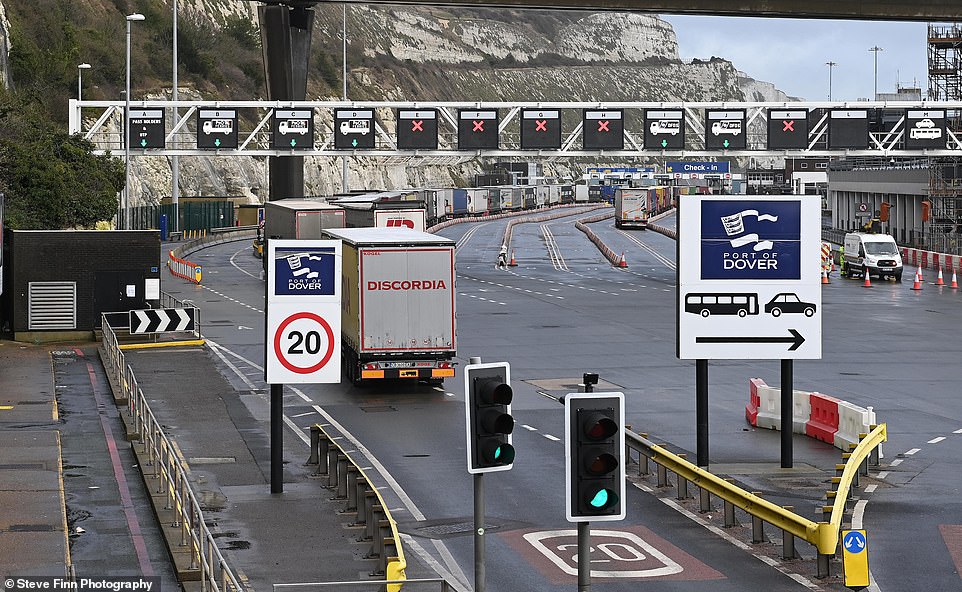 Lorry drivers must still show proof of a negative test taken within 72 hours or be blocked from crossing at Dover, seen today 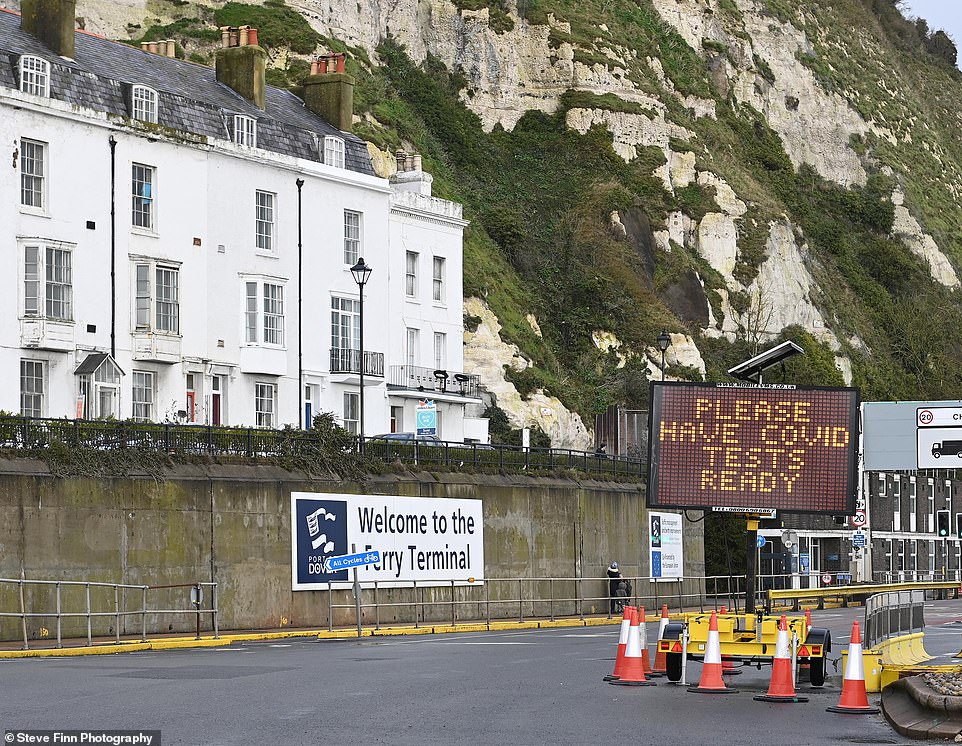 But the majority are arriving in Kent untested, and having to be re-directed to nearby testing sites before re-joining the queue to cross could significantly increase traffic and potentially cause blockages. 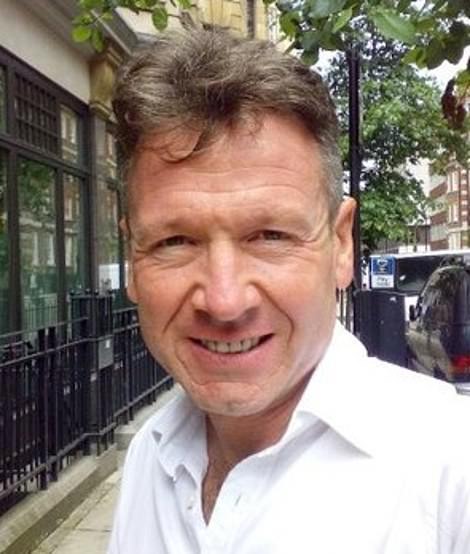 Rod McKenzie, managing director of policy and public affairs at the Road Haulage Association, told the Daily Mail they were expecting thousands more lorries to be crossing in the coming weeks with traffic levels returning to normal.

However, he said the new measure being mulled by ministers would penalise foreign drivers. It is understood the vast majority who turn up untested are from eastern Europe.

Mr Mckenzie said: ‘There is an issue about fairness and we are going to end up penalising drivers for nothing more or less than not having English as a language and so not being aware.

‘We would urge the Government to increase the communication to drivers of different nationalities that they will need a Covid-19 test.

‘A good job has been done with British drivers, but what we are hearing is that the guidance translated to different languages isn’t so good. If people blatantly ignore the advice once they know, then of course that deserves a fine.’

Lorry drivers already require a Kent Access Permit to enter the county under post-Brexit rules. They are fined £300 without one. 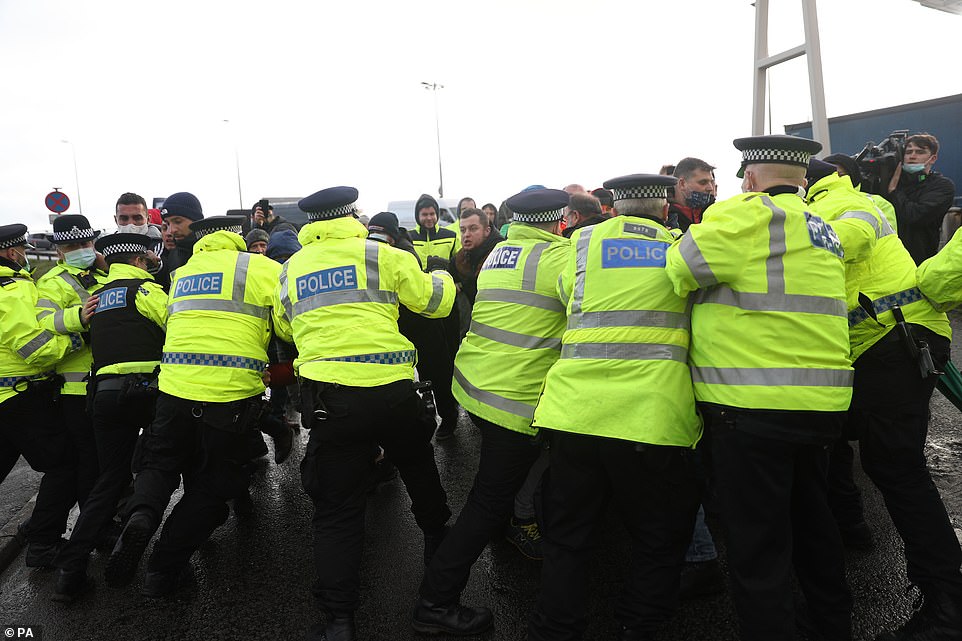 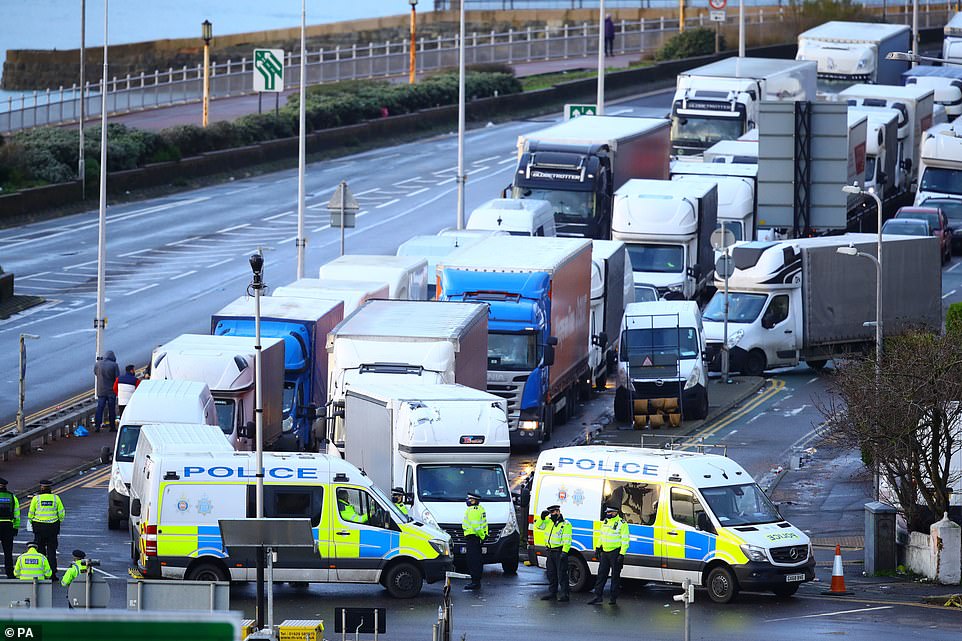 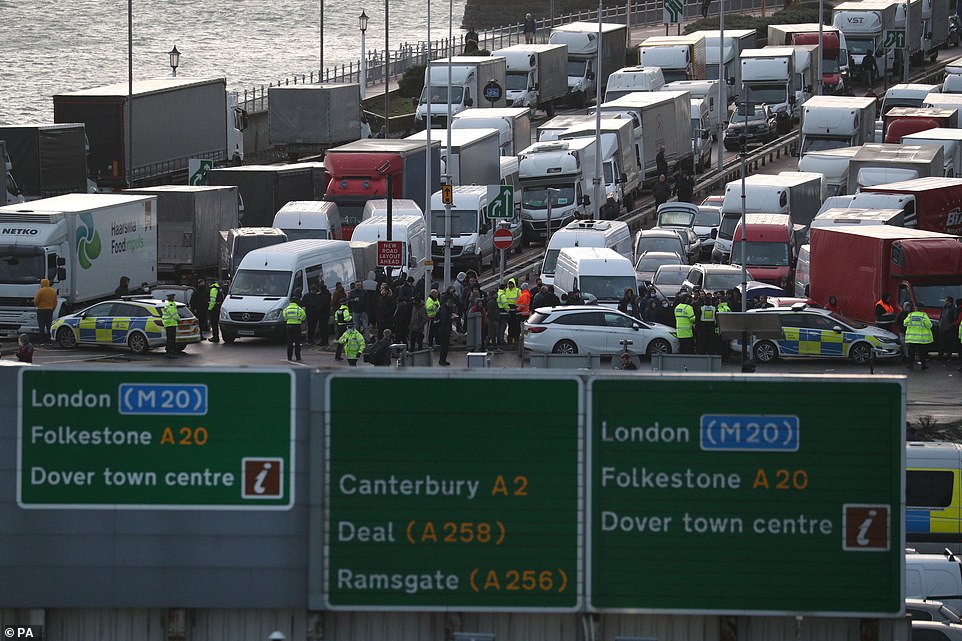 The permits are intended to help keep traffic flowing by confirming drivers have the right documents for EU import controls before reaching the UK-EU border.

Every permit lasts 24 hours and drivers need a new one each time their HGV leaves the UK. More than 400 fines for not having one have already been issued since January 1.

A DfT spokesman said: ‘Hauliers looking to cross the Channel should take their Covid-19 test before they enter Kent to help traffic flow.

‘While we’re pleased many hauliers have heeded our calls to use 34 testing sites we’ve set up across the country, too many are still entering Kent without having taken a test and received a negative result.

‘With traffic volumes expected to grow over the coming week, we are considering stronger measures to ensure flow.

‘If hauliers continue to ignore the requirement to get a negative test before entering Kent, then fines may become necessary.’